Book Review: The Invention of the American Desert: Art, Land, and the Politics of Environment edited by Lyle Massey and James Nisbet

Lyle Massey and James Nisbet eds., The Invention of the American Desert: Art, Land, and the Politics of Environment (University of California Press, 2021). pp. 256. $75. 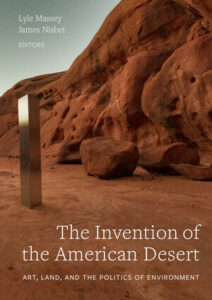 If I had to choose just one moment to share from The Invention of the American Desert: Art, Land and the Politics of Environment, it would be this: J. Robert Oppenheimer, creator of the atomic bomb, dreamed about deserts. Joseph Masco, in his contribution to this volume, describes the way that Oppenheimer’s role in the siting of the Manhattan Project’s intellectual heart at Los Alamos reverberated outward with material impact. Masco calls Oppenheimer a ‘committed desert modernist’ who considered the desert a beautiful and empty space ripe for inspiration and experimentation. ‘His perfect desert,’ Masco writes, ‘the one with both sage and physics—set in motion a series of ongoing environmental, scientific, and military revolutions, transformations that now connect every living being on the planet via the embodied radioactive residues of US nuclear nationalism’ (24). Masco goes on to look at US military photography of the hundreds of nuclear explosions carried out in the Nevada desert in the 1950s, arguing that Oppenheimer’s idealised desert is reproduced in these photos—a settler-colonial imaginary of uninhabited space that created ‘an image of containment for events that were quite literally planetary in scope, dosing the global biosphere and every living being in [radioactive fallout] with each thermonuclear detonation’ (35).

Images and imaginaries of the desert, Masco shows us, matter. They influence collective thought and culture, they directly power the detonation of bombs and have physical, global, consequences. This striking argument is at the heart of the work compiled in The Invention of the American Desert—which powerfully demonstrates the way that representations of the US desert (whether through film, photography, art installations, literature, the built environment—or J. Robert Oppenheimer’s dreams) materially impact both the physical landscape as well as cultural and ideological conceptions of it. As editors Lyle Massey and James Nisbet write in their introduction, these desert representations have been ‘integral to the historical construction of American identity’ (9). Any one of the ten essays in this volume could serve to open this review as an example of critical scholarship showing that cultural imaginings have the power to both ‘construct the desert and also to act to critique and decolonize its past’ (9). This duality of images that construct and images that critique makes wide-ranging consideration of—in the words of this book’s title—how the American desert was invented.

Where Masco’s work exemplifies how the desert was constructed as a lifeless void to advance the purposes of the US military, it is juxtaposed with essays which show the power of art to imagine otherwise. Jessica Horton’s close reading of Diné (Navajo) artist Will Wilson’s multimedia installation AIR (Auto-Immune Response), emphasises the possibilities for ‘creative, nonnormative futures’ in Wilson’s work and on Diné land that has been continually poisoned by the slow violences of the nuclear industry and the capitalist, colonial state. Wilson’s project is one of Indigenous futurism, that pictures ways of being, even in the face of a toxic environment. Similarly, Emily Eliza Scott writes about the work of contemporary artists Trevor Paglen, Hito Steyerl, and Fazal Sheikh, arguing that these artistic interventions in desert landscapes work as ‘reverse camouflage’ to visualise the destructive histories of colonial and military occupation that are all too often made invisible in the desert.

It is clear that these essays are not simply an exercise in art-historical or aesthetic criticism—there is a political and cultural immediacy to this writing, and a persuasive argument for the work that images do. This is true of all the contributions to this volume which are impressively consistent in their depth, creativity, and critical nuance. Though the essays focus on a specific region and time period (the post-war desert of the American Southwest) they contribute to a global conversation in the humanities about the relationship between desert landscapes, modernity and modernism, colonialism, the military-industrial complex, climate change, and indigenous futurities. In addition to the examples discussed above, the remainder of the interdisciplinary writings cover topics such as the construction of adobe structures at the Sundwellings solar energy project in New Mexico, modernist and midcentury homes (Albert Frey’s Palm Springs house or Bouldereign, the mid-century behemoth iconically and fictionally destroyed in Michelangelo Antonioni’s film Zabriskie Point), Don DeLillo’s novel Point Omega, as well as work by artists Andrea Zittel and Noah Purifoy. Organised into thematic sections (contamination, fabrication, invisibility and dystopia), the essays do well to situate these cultural works in longer American histories of settler-colonialism, military violence, extraction, racism, and the male-dominated legacies of land art and modernism.

Most simply, the persuasive power of The Invention of the American Desert, might lie in its timeliness and clear stakes. As the desert ‘continues to be fetishized as a backdrop to modernist forms and ideals’ (9) in projects such as Desert X, and climate change and desertification (which I learned here is a term with European-colonial origins) loom, the volume asks not only how the desert has been imagined in the past and present, but also about the coming desert. As the authors of the book’s coda write, we don’t yet know what desert futures hold. Still, a commitment to critical aesthetic investigation of the coming desert—because it will come—remains a crucial tool for constructing knowledge.

Charlotte Hecht is a PhD candidate in American Studies at Yale University. Her interdisciplinary work broadly focuses on visual culture, the built environment, and landscape. Her dissertation is a cultural history of nuclear landscapes in the United States.
View all posts by Charlotte Hecht →
Tagged  Book Review, Desert, Environment.
Bookmark the permalink.