The annual conference of the Scottish Association for the Studies of America once again collated a wide variety of research, PhD chapters and other works in progress from wide variety of academics and postgraduate researchers. And as SASA recognizes the broadness of American Studies and therefore does not call for papers topically, it remains open to all postgraduate scholars on a topic they are interested and/or experts in. While the COVID19 pandemic gives little respite even two years in, this year again SASA conference was successfully held virtually, upholding the same enduring jovial and informal environment we have grown to know and enjoy. The new Chair of SASA, Hannah Jeffery, describes the annual conference as ‘a platform to get that kind of first experience as a PhD or master’s student to present because sometimes, obviously, that can be quite daunting especially if it’s a bigger conference.’[2] Therefore, SASA remains an inclusive and explorative experience, providing a great opportunity to practice presentation and conference skills alongside friendly, instructive feedback from peers with variety of experience and expertise in contemporary American Studies. 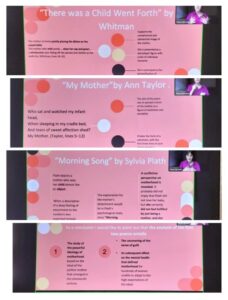 The ‘Mother’s and Activists’ panel began with Paula Serrano Elena’s (University of Zaragoza) empowering paper, ‘The Power of the Ideal: An Analysis of the Evolution and the Effects of the Ideal of Motherhood in Literature from the Nineteenth Century to the Late Twentieth’. In her research, Elena discusses the explorations of the realms of the ideal versus the reality of motherhood in the nineteenth– and twentieth century literatures of writers such as Walt Whitman, Ann Taylor and Sylvia Plath. The themes of disconnectedness, adaptability and the impossibilities thereof were insightfully highlighted as Elena compared the male and the female writers’ standpoints of perceived motherhood. Central notions arose in the examination of the preconceived conceptions of the ‘perfect’ mother and the subsequent inflicted impact on mental health of women as mothers. 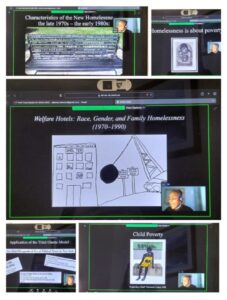 Dr. Nicole M. Gipson (Global Urban History Project) provided a glimpse into her current book project, ‘Welfare Hotels: Race, Gender and Homelessness (1970-1990)’[3]. The paper examines how public versus private federal policies are impacting the African American, single female heads of households, who suffer from an imposed ‘invisibility’. In her project, established within the broader research of the Third Ghetto[4], Gipson compellingly explores the changes in twentieth-century homelessness, which is more gendered, involves more young people and is inescapably tied to racial inequities in the American welfare state. Furthermore, Gipson is particularly concerned as to what extent such marginalization and discriminatory policies could be considered acts of gendered state violence and child abuse.

In ‘“This isn’t ‘who we are as a nation,’ but, well, it kind of is who we are”: Reading Ducks, Newburyport as a Contemporary State of the Nation Novel’, Elisa Pesce (University of Glasgow) connects Lucy Elman’s novel Ducks, Newburyport (2019) into the nation’s collective mood. Where the book poignantly examines issues such as gun violence, economy, public versus private services, and strategies of survival through the perspective of mother’s love, Pesce intimately connects this into contemporary state of a collective mood with what Pesce describes as an ‘ocean of words in fictional encyclopaedism in contemporary U.S. literature’.

The former Chair of SASA, Dr. David Silkenat, chaired panel on the ‘Old South’, where Julian Windhövel (University of Cologne) and Mara Curechian (University of St. Andrews) furthermore engage with the themes of prejudice, discrimination and imposed imbalances against minorities in America. Windhövel persuasively explores the old Louisiana’s Black resistance and the efforts of the Freedmen’s Bureau during Reconstruction where acts of violence and repression were a Southern form of counter-Reconstruction directly leading to Jim Crow. The Bureau chillingly albeit perhaps unsurprisingly discovered that as violence and repression against the formerly enslaved increased, the complaints made about rights violated decreased. Curechian’s fascinating research, via authors Toni Morrison and William Faulkner, renounces the linear historicism of queerness, advocating for a more ethical engagement with history. These authors are placed on a stage of counter-heteronormative historical engagement and queer temporality with non-normative sexualities, embracing their perceived ‘otherness’. Curechian’s and Windhövel’s respective studies explore the collapse of linearity of time, examining how the past is difficult to recover from, but it also gives life to the present.as the two works redefine concepts of chronology an historical record as they are marred by erasures.

In the afternoon, the ‘Black Resistance’ panel explored how Black America faced regional, personal and nationwide prejudices and their acts of resistance were progressively becoming more radical. In ‘Contingent Colours: Race as a Variable Social Category in Mixed Race Communities’ Kendall Artz (College of William & Mary) scrutinizes the continual reclassification of categorizations of race and racial systems in America. Artz humanizes these challenging concepts through the examples of new racial identities,[5] thus engaging new racial identities with the evolving racialization in a white capitalist dominion. Notably, Artz positions how race in the more modern conception should be seen as a verb and not as a noun, leading to new racial hierarchies beyond ‘white’, ‘black’ or ‘bi-racial’. 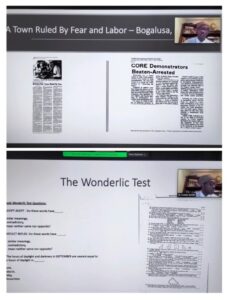 To close, D. Caleb Smith (Tulane University) presented his PhD chapter in progress, titled ‘From Strikes, Marches and Pickets to Title VII Precedents: Revisiting “Bloody” Bogalusa’s Black Freedom Struggle, 1964 – 1970’. This paper presented yet another example of institutional prejudice and racism being aimed to disadvantage Black Americans – namely, the discrimination in American labour force. Smith dynamically investigates the rise of radical resistance through the perspective of Black labour history, as workers faced intimidation, violence and petty trickery – such as blocking a Black worker from the time clocks as they arrive to work, leading to loss of monies with inaccurate hours. Smith noted, during this time Bogalusa saw some of the worst of humanity with restrictions of political participation and Civil Rights via violence, segregation, economic repression, all designed to repress Black citizens’ advancement, seeing little to no affirmative action taking place.

All of these presentations included visual aids, which at the same time enabled to retain some facts but which might have distracted some from the actual speaking content. However, what is vital is how all the above discussed research explored forms of prejudice and racism that are inbuilt over centuries into American economic, political and criminal justice systems. Engaging with past, present and future state of issues raised in these and other presentations during this year’s annual conference, these papers re-collate the understandings of how far contemporary America is willing to go in its depravity regarding restrictions and threats against racial, women’s, LGBTQ+’s, and other minorities’ rights. The many existing and menacing prejudices and discriminations are evinced to persist to this day as seen in the systemic racism in policing, in employment, education and welfare matters in America. Thereby, interdisciplinary and intersectional research works such as these connect intimately to our contemporary moment when some states in America are determined on stripping the rights of women, forcibly dragging the nation back to an era pre-landmark cases such as Roe v. Wade (1973), Planned Parenthood v. Casey (1992) or Obergefell v. Hodges (2015).

Continuing on from the urban historian Arnold Hirsch’s work on the Making the Second Ghetto: Race and Housing in Chicago 1940-1960 (1983).

[4] Such as Jackson Whites (Amalgamation of “jacks,” ie. runaway slaves, and whites, therefore referring to bi-racial individuals) and Redbones (tri-racial people who established their own “race” or tribe).

Aija Oksman is a PhD candidate at the University of Edinburgh. After an MLitt in Publishing (University of Stirling) and MSc (University of Edinburgh) on radical self-representation of Sojourner Truth and Frederick Douglass, her current research focuses on African American women writer’s literary and counterliterary experience with the FBI. Her research interests are interdisciplinary and intersectional with focus on women’s and other marginalised groups’ literary, cultural and socio-economical interactions and counteractions.
View all posts by Aija Oksman →
Tagged  Events Review, Review, SASA.
Bookmark the permalink.