Book Review: Phantoms of a Beleaguered Republic: The Deep State and the Unitary Executive by Stephen Skowronek, John A. Dearborn, and Desmond King 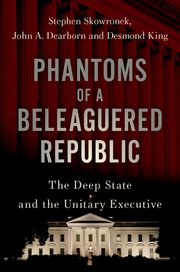 The Trump presidency was a period of unrelenting drama. Trump was often joined at centre stage by members of his own administration, cast as his adversaries. He described these previously anonymous bureaucrats as members of a hidden ‘Deep State’ within the government scheming to undermine his control over the executive branch.[1] Trump viewed the Article II vesting clause, which states that ‘[t]he executive power shall be vested in a President of the United States’ as having lodged all executive power in the presidency and, under that unitary executive theory, considered any resistance to his will to be a constitutional offence. He moved to stamp out all opposition within the government; frequently, as if to confirm Trump’s allegations of a rogue bureaucracy, the bureaucracy fought back.

This civil war within the government and its intellectual foundations are the subjects of Phantoms of a Beleaguered Republic: The Deep State and the Unitary Executive by Stephen Skowronek, John A. Dearborn, and Desmond King. The authors note that the complete presidential control over executive branch activity alleged by the unitary executive theory is inferred by Article II, and that it has been evoked, mostly in spirit, by many presidents. They assert that under Trump however, it was used as a convenient framework for satisfying his need for absolute personal obedience and for justifying the use of the state to achieve his personal and political ends. The unitary executive theory therefore became a ‘phantom’ that propelled Trump’s war on the government. To cast the administrative state as the enemy, Trump applied the term ‘Deep State’ to the bureaucracy built to restrain the power of the presidency as federal powers expanded dramatically. This sinister image constituted the second ‘phantom’ of the Trump presidency.

As the authors explain, the administrative state is deep – in its reach into American lives, in its culture, in its expertise, in its appointment and removal protections, and in the relationships it forges through the process of congressional oversight – and that this depth insulates it from absolute presidential control. They conclude that this depth limited the full effect of Trump’s assaults, but that he did real damage to the rule of law and to the view that the bureaucracy is a necessary brake on a hyper-empowered executive. But this depth, painstakingly built through legislation and practice, was more than an effort by the political branches to deepen the checks-and-balances features of the constitutional design and qualify the expanding powers of the presidency. It involves a central constitutional question. Like the unitary executive theory, the legitimacy of the administrative state also rests on a constitutional inference and the question it poses: Does the legislative power infer the right of Congress to instruct the manner and means by which the president executes the law? The depth of the state was, after all, constructed through legislation and with presidential assent. This is the congressional counterattack against the unitary executive theory and the authors might have considered it more closely. If the unitary executive view prevails, every element of state depth is constitutionally suspect. Perhaps the federal judiciary, now weighted with Trump appointees, will provide answers in the coming years.

This book is a superb first look at Trump’s assault on the executive branch, though it would have benefited from a fuller consideration of the administrative state’s constitutional basis.  As a serious work of scholarship it largely avoids the value judgements that often colour discussions of Trump and his presidency.  It builds upon Skowronek’s earlier scholarship on the construction of the bureaucracy and its role in meeting the imperatives that accompanied demands for policy solutions to societal problems.[2] It also expands King’s scholarly work on the bureaucracy and its relationship to marginalized populations and gives us a preview of things to come from Dearborn, an early career researcher who also published a book in 2021 under his sole authorship.[3] The conclusions these authors reach are preliminary; their sources are largely secondary without the benefit of original documentation.  As pieces of the documentary puzzle become available, their assessments will be challenged and revised. But Trump and his inner circle were rarely reticent in discussing their objectives, nor did they shrink from the challenges the ‘Deep State’ posed.[4] With the full benefit of original documents, the authors’ depiction of Trump’s war against his own government, and the degree to which it was planned and executed by a presidency empowered by the unitary executive theory and Trump’s personality, is likely to be confirmed and strengthened.

Dr. David Caudill is an independent scholar based in the United States. He was awarded his PhD in Politics from the University of Leicester in 2021 with his thesis "War, the War Power, and the War Powers Resolution of 1973: A Study in American Political Development". He also holds a law degree from the University of Cincinnati and a Master of Public Administration from Northern Kentucky University. His research interests include war powers reform efforts in the U.S. Congress and the emergence of the Supreme Court as a constitutional tribunal.
View all posts by David Caudill →
Tagged  American Politics, Book Review, Donald Trump.
Bookmark the permalink.