“Where is Thy Sting?”: Clifford Odets and the Problem of Audience

On September 6th 1936, The New York Times went to print with an article entitled: “Odets, Where is Thy Sting?”[i] Reflecting on the recent reception of Clifford Odets’s The General Died at Dawn (1936), Frank Nugent described the enthusiasm of the audiences who had come to see the Broadway playwright’s first Hollywood feature: “[T]hey had come to hear their prophet of social reform in his first sermon from a cinema pulpit. They were prepared to cheer, they were anxious to cheer, and, by every soapbox from Union Square to Columbus Circle they did cheer”.[ii] But they soon fell silent, however, upon realising that the film offered them very little to cheer about. While many hsad come with the hopes of catching a glimpse of the sharp political edge which had made Odets’s plays something of a sensation, it quickly became apparent that the film offered very little in the way of cutting social critique. Following an American mercenary named O’Hara who finds himself caught up in a plot to overthrow the tyrannical Chinese warlord, General Yang, The General Died at Dawn revealed itself to be little more than an adventure-romance told in the style of a contemporary melodrama. The sense of betrayal and indignation that Odets’s supporters felt at this revelation was, Nugent suggested, palpable, and his sense that Odets would “be made to pay for” for his transgression would soon prove right.[iii]

Indeed, the reception of The General Died at Dawn is often understood as a pivotal event in Odets’s career, marking the moment in which he began to transition from a politically radical and innovative playwright to a depleted and conformist Hollywood screenwriter. Although Odets would go on to have some further successes on Broadway and in Hollywood, his reputation would never fully recover, leading his close friend, the acclaimed theatre and film director, Elia Kazan, to proclaim: “The tragedy of our times in the theatre is the tragedy of Clifford Odets”.[iv] Such sentiments notwithstanding, the difference in writing for and about Broadway and Hollywood audiences during the 1930s nevertheless invites a more nuanced consideration of the difficulties Odets encountered when moving from the stage to the screen. 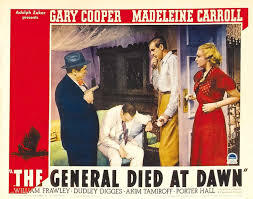 As a prominent playwright whose early work seemed poised to usher in a new era of political drama, the expectations for Odets’s first foray into Hollywood were perhaps impossibly high. Just one year before The General Died at Dawns was released, Odets had enjoyed a string of successes on Broadway with plays such as Waiting for Lefty, Awake and Sing!, and Paradise Lost (all 1935) putting him ‘in danger of becoming a foremost dramatist.’[v] During this time, Odets rose to fame as a leading member of the Group Theatre — a collective of independent playwrights based in New York City who sought to foster “a community of desire, interest, and understanding’ between artists, audience[s], and the larger group[s] to which they both belonged”. Written for and often about audiences in New York City, Odets’s plays thus sought to capture the day-to-day struggles of ordinary working people. With astute social and psychological realism, they examined the plight of striking taxi drivers, impoverished Jewish families, and down-trodden suburban communities. In these plays, character, plot, and dialogue coalesce in order to reflect the social consciousness of the city in ways which Odets believed would make them “immediately and dynamically useful” to their audiences.[vii] By suggesting that his plays might prove useful, Odets’s gave voice to the general feeling (shared by many of his contemporaries) that theatre was capable of articulating the attitudes of its audiences, bringing them into a greater awareness of their social reality, and encouraging them to engage in forms of activism. As he would later suggest following the inaugural production of Waiting for Lefty: “[We] saw for the first time theatre as a cultural force. There was such an at-oneness with audience and actors that the actors didn’t know whether they were acting and the audience didn’t know whether they were sitting and watching it, or had changed positions”.[viii] For Odets, theatre had a communitarian potential and he therefore saw Broadway as a place in which he could speak directly to audiences in order to “say whatever [there was] to be said”.[ix]

Like many playwrights of his generation, however, Odets’s belief in the collective and egalitarian potential of Broadway theatre was set against his scepticism of Hollywood cinema’s commercial interests. If, for Odets, theatre was a medium which could create active and engaged forms of spectatorship by accurately reflecting the social and political reality of its audience, then cinema was an institution which sought to interpellate a passive audience on whom it could impart the economic values of capitalism’s mass cultural hegemony. As Jacob suggests in Awake and Sing!: “[A] boy don’t turn around without having shoved in him he should make a success. He dreams all night of fortunes. Why not? Don’t it say in the movies he should have a personal steamship, pyjamas for fifty dollars a pair and a toilet like a monument?”[x] Exemplary of view that cinema lead to an ‘administered life’ (to borrow Adorno and Horkheimer’s phrase), Jacob’s comment echoes Odets’s own concerns that Hollywood did not try to reflect social reality of its audiences so much as recreate and distort this reality for financial gain.[xi]

For these reasons, Odets was initially reluctant to try his hand as a screenwriter. Yet, the substantial incomes and sizable audiences of Hollywood nevertheless presented him with a significant opportunity. Having been offered $20,000 by Paramount Pictures for The General Died at Dawn, Odets had initially intended to use the money to subsidise his playwrighting and support the Group Theatre. (He would later find himself increasingly interested in the profits afforded by this industry, inviting accusations of hypocrisy from fellow writers.) Moreover, and perhaps more significantly, Hollywood appealed to Odets because it brought with it the possibility of reaching a much wider audience. As he wrote in his 1940 journal: “[t]o be socially useful” as a writer, one “must make sure to write from a firm core even through, in my opinion, an attempt to reach as broad an audience as possible”.[xii] He continued: “I thought once that it would be enough to play in a small cellar, but I soon saw that those who would come to the cellar were not the ones in need of what I could say”.[xiii] By co-opting Hollywood’s wide reach, Odets believed he could project his message far beyond the confines of New York City.

In spite of this, however, it seems that Odets underestimated the extent to which Hollywood’s production companies would try and contain the radicalism of The General Died at Dawn, bowdlerising its content in keeping with the industry’s famed self-regularity practices. Yet Odets himself was not entirely blameless: in seeking to appeal to a wider demographic and forgoing his usual subject matter, he also opted for a story in which the action was too abstract and distant to resonate with those for whom he purported to write. While the film might have started out with some “very good ideas”, Odets admitted that the final product was little more than “a set of cliches on which we made some good birth-day decorations”.[xiv] In attempting to move beyond his original audience, Odets’s lost his sting, and The General Died at Dawn failed to recreate the communitarian ‘at-oneness’ which had made his early plays such a success. 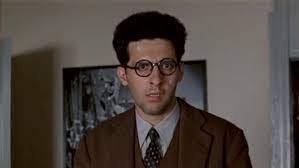 Released a half century after The General Died at Dawn, the Coen Brothers’ Barton Fink (1991) offers an insightful (and, indeed, ironic) take on the difficulties faced by Odets. In this film, a young playwright by the name of Barton Fink is approached by a Hollywood production company who intend to bring him under contract as a screenwriter. After voicing his concerns that the move will “[cut] him off from the wellspring” of his success and “the common man”, his agent coolly assures him: “The common man will still be here when you get back. Who knows? They may even have one or two of them out in Hollywood”.[xv] Upon seeing the look of contempt on Barton’s face, however, he quickly adds: “it was a joke”.[xvi] Whether or not Odets would have found it funny one, is another matter.

[i] Frank S. Nugent, ‘Odets, Where is Thy Sting?,’ Reflections of Passing Events in the Screen World, The New York Times, September 6th, 1936.

[ix] Clifford Odets, Waiting for Lefty and Other Plays, vii.

Veiled Interpretations of Du Bois’s 'The Souls of Black Folk' (1903)
'Urban Comix’: Collaboration, Reconstruction and Resistance in the Divided City
Fargo 1996, Fargo 2014, and the Art of Homage

Izaak Bosman is a PhD researcher at the University of Cambridge specialising in American literature. His research explores ideas of theatricality in the work of Frank O’Hara and the extended New York School of Poets. More broadly, he is interested in the interdisciplinary relationship between poetry and theatre, dance, and film during the Mid-Century period. He can be contacted via email at ib425@cam.ac.uk.
View all posts by Izaak Bosman →
Tagged  Adaptation, Drama, Drama and Cinematic Adaptation, Film, Hollywood, Theatre.
Bookmark the permalink.