Mending Fences: The Broken Bond between Theatre and Film

Play to film adaptations have fallen in prestige and numbers in recent years, and one of the main reasons for this is the decline in popularity of plays that can be adapted. For example, A Streetcar Named Desire was the 5th highest grossing film of 1951[i] while Fences was the 91st highest grossing film of 2016[ii]. As film technology has improved in the intervening years, so has the public interest in stage works that are not comedies or musicals declined. From a culture of regular and successful stage to screen adaptations to one in which it is vanishingly rare, this article will reflect on how and why these changes have come about.

One notable facet of this decline is the relative scarcity of actors moving from the stage to film. Whereas in previous decades actors struggling to find work in film could earn equal prestige on stage, it is now far more common for them to work their way up through smaller film roles, or on television. Marlon Brando is perhaps the most obvious example of this – his performance as Stanley in the original Streetcar was so well regarded, that he reprised it for the film version. Though he had only appeared in one film, The Men (1950) before that, he was well known for his work in theatre. Stars could be a household name through theatre alone and one’s fame in theatre could be used to market a play. In comparison, now Hollywood actors are cast as a way of marketing plays, such as Adam Driver in the 2019 revival of Lanford Wilson’s Burn This. Many plays bring in pre-established movie stars, and actors getting famous for stage work is decidedly less common. This lack of a clear path from Broadway to Hollywood for actors is a key sign that plays have declined in popularity and importance, and so are less likely to be adapted for the cinema. 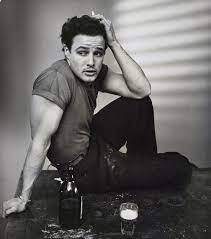 Another important reason for this lack of contemporary adaptations is that film has changed in many ways with the development of modern technology. With surround sound, 3D and cutting-edge special effects, the scope of what is possible to portray on screen is broadening almost every year. Theatre, besides a couple of changes such as the introduction of projectors and more advanced ways of moving things around the stage such as a revolving floor and trapdoors for getting actors on, is largely unchanged from the past – technological innovation can only go so far. Plays also typically only lend themselves to viewing in their live format. Unless a performance gets a ProShot, there will never be chance to see the same play again while it is done. By contrast, films can be rewatched at any time, thanks to video tapes, DVDs, and now home streaming services. Theatre is highly interpretative, so every creative team has their own view on how a play should look, feel, and work. Interpretation can vary so much that the play may not be told the same way twice, making each different version of a play that is being performed very specific. An adaptation of Romeo and Juliet could be set in modern times in one performance or entirely set in one location in another version, and so neither is the “definitive” performance. Play interpretations are not permeant, whereas film is.

This loss of interest in modern plays can be seen if we compare modern day play adaptations such as August Wilson’s Fences and Ma Rainey’s Black Bottom (2020) with Streetcar. Streetcar was first performed in 1947, only four years before the film, showing that it was a recent play that people were excited about and that had gained enough popularity to make a profitable film of. In comparison, Fences premiered in 1985, three decades before it was adapted. This shows that instead of there being a new and exciting play for people to adapt, they had to turn to older plays for inspiration, and implies that there is a lack of exciting and popular recent plays to adapt to a profitable film. Similarly, Ma Rainey’s Black Bottom was based off a play from 1982, so there is a clear pattern of retrospective adaptation that differs from earlier spells of more immediate transfer of works from the stage to the big screen.

Stylistically, Fences is in some ways similar to play adaptations of earlier years such as Streetcar. Both involve actors who portrayed the characters on stage, both are dialogue-heavy, and both are largely set in one location. However, the reception of these films differs greatly. Richard Brody stated that Fences “maintains a theatrical sense of scenes and acts; despite its realistic settings and some moments that expand the action into the street and further into the city, it may as well have a curtain to separate them”[iii], foregrounding the fact that it is evidently a film version of a play. Streetcar, though, was referred to as being “like watching a Shakespearean tragedy”[iv] in Roger Ebert’s 1993 review of the uncut version.

The key difference between the two is shown in their confrontation scenes. In the confrontation in Fences between Rose (Viola Davis) and Troy (Denzel Washington), the camera focuses strictly on the actors’ performances. It is either doing a long take focused on Rose’s face as she cries or cutting shot reverse shot to Troy for his reactions. One cannot read anything from the mise-en-scène besides the actors as that is all the camera – and therefore the viewer – is focused on. It does not use the medium of film to express Rose’s anger over her husband’s affair. The film is so dedicated to replicating the style of a play, it forgets to use the fact that it is a film. 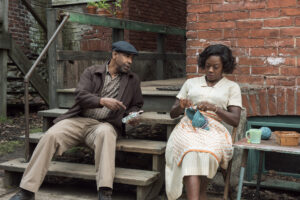 In comparison, the confrontation or ‘pearls before swine’ scene in Streetcar succeeds because it utilises the fact that it is a film. Blanche (Vivenne Leigh)’s costume is symbolic; like her it is glamorous but old fashioned, but the way she flings the skirt around throughout the scene is reflective of how she uses her older looks to seduce younger men. By tearing the dress in the scene, Stanley is tearing through the facade of an elegant older woman and exposing the skin underneath, or rather her promiscuous nature that she conceals. The cinematography is also used to enhance Stanley’s power over her. As he pushes her on her back, the camera films him from an upward angle from her perspective, showing the power he holds from her and emphasising how physically dangerous he is through the film medium. When a film is like the theatre medium, it is less well regarded. When a play is adapted to a film in a way that utilises the film medium, it is better received, showing general audiences seem to prefer when films are as unlike plays as possible and showing elements of plays falling out of style with mainstream audiences.

Overall, play to film adaptations have become less common throughout the years. Film has evolved in ways that theatre cannot, making the differences between film and theatre much wider than before. Streetcar was well received because it knows it is a film adaptation of a play, whereas Fences tried too hard to be the play. Play adaptations of serious contemporary plays are rare nowadays, and while this is not to say there is not excellent work being done at every level of the theatre, it suggests that we are missing out on enjoying and rewarding a creative path that has been so rewarding in previous decades.