Broadway, Hollywood, and the Problem with The Prom

Among all the necessary and welcome debates around identity in contemporary culture, few have been more pronounced in theatre and film than that of who should be cast to play characters of marginalised identities. From gender identity and religious beliefs to nationality and disability, this issue is occurring with increasing regularity. Eddie Redmayne has called his portrayal of Lili Elbe, who underwent sex reassignment surgery in the early 20th century, in The Danish Girl (2015) “a mistake”[i], which reflects a wider trend of studios and casting directors rightly taking more care when selecting actors for certain roles. It should be said, though, that this is not an entirely new phenomenon – over 40 years ago Vanessa Redgrave, an outspoken critic of Israel’s actions in Palestine, was attacked when chosen to portray musician and Holocaust survivor Fania Fénelon in Arthur Miller’s television film Playing for Time (1980)[ii]. And while this centred on a mix of political viewpoint and identity, the principle that she was not fit to the play the role is the same.

Recently another problem in relation to casting has come to the fore, and this concerns the adaptation of popular stage shows into films, currently enjoying a post-Hamilton (2015) boom. With audiences returning to full capacity theatres, the ethics of casting when adapting stage shows for the big screen should be questioned. The Prom (2020), recently released via Netflix, brought this into focus – none of the Broadway cast were retained, and famous actors (Meryl Streep, Nicole Kidman, James Corden) were chosen in their place. This highlights the often-unaddressed financial and professional insecurity of so many stage actors, from Broadway down. Here I will outline some of the broad trends in the movements between Broadway and Hollywood, before using The Prom as a key example of a contemporary dispute that is likely to be repeated as inequalities deepen, and actors insist on more appropriate remuneration. 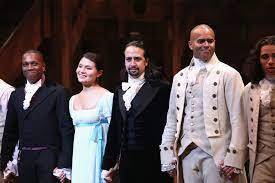 In the early 20th century, it was commonplace for writers and actors to move between the two coasts, contributing work for the stage and screen. In the early stages of sound film, playwrights were heartily welcomed in Hollywood – as Kenneth MacGowan wrote in 1956, “for a few years after 1929, Hollywood hired playwright after playwright from Broadway. It didn’t much matter whether their play had been successes or flops. They knew how to write”[iii] Among the most successful of these was Robert E. Sherwood, who achieved popular and critical acclaim in both mediums, winning three Pulitzer Prizes for Drama and then an Academy Award for The Best Years of Our Lives (1946), while the advent of sound encouraged more stage actors to move to Hollywood, with the promise of greater fame and fortune. There has been no distinct rhythm, but certainly some significant trends, to the relationship since then. mid-century playwrights such as Miller, Clifford Odets, Lilliam Hellman, Tennessee Williams, and Lorraine Hansberry were expected and encouraged to write either original or adapted material for Hollywood, but there was little guarantee of success. Elia Kazan had a hit with A Streetcar Named Desire (1951), but the other most notable play he directed, Death of a Salesman (1949), was adapted in the same year as Streetcar by László Benedek, and despite five Academy Award nominations, was poorly received by critics, and had no lasting cultural significance. Edward Albee had a success with the adaptation of Who’s Afraid of Virginia Woolf? (1966), but like many of his Off-Broadway contemporaries, much of his work did not have widespread cinematic appeal. From then on, comedies and musicals were the dominant forms that moved from Broadway to Hollywood – Bye Bye Birdie (1963), The Odd Couple (1968), and Hello, Dolly! (1969) are some of the most important examples. Sam Shepard was involved with Hollywood as an actor and writer, yet adaptations of his own work were rarely if ever memorable, and his best work in film was in either acting or writing original work. The success and regularity of David Mamet and Tony Kushner in writing for the stage and screen seem like outliers now, especially when compared to their contemporaries – Paula Vogel, Wendy Wasserstein, and August Wilson had little to no contact with Hollywood, and Wilson’s plays, such as Ma Rainey’s Black Bottom (1982) and Fences (1983) are only now being filmed.

Throughout this time, it became less likely for actors to begin on Broadway, and then move to Hollywood. Perhaps due to the different requirements of stage and screen acting, the growth in television, or the greater financial rewards in Hollywood, it is almost inconceivable to imagine another Jason Robards, who made the move from Broadway to Hollywood relatively late in his career. The reverse is more likely to happen – “stunt casting” Hollywood stars into Broadway roles. The title of David Gordon’s review of The Music Man encapsulates this problem: “Hugh Jackman Is Starring in The Music Man. Does This Review Really Matter?” He writes that the “production knows what its audience wants […] unimpeded time with Hugh Jackman and Sutton Foster”[iv], and this sums up the problem that is exemplified with each successful adaptation of a Broadway show – left to the market in this way, famous and wealthy actors can use theatre as and when they like it, helping to devalue and exclude performers who make their living on stage. 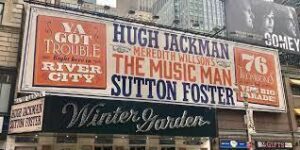 Currently we are in a surge of musical adaptations – The Prom, Tick, Tick… Boom!, Dear Evan Hansen, In the Heights, and West Side Story (all 2021) each originated on stage, and have received considerable popular and critical attention. This new interest in musical theatre will most likely increase its popularity in a post-Covid world, despite the outrageous ticket prices on Broadway – Broadway.org notes that “Regular Price tickets generally range from $20 to $175 (£15-130)”[v]; these tend to group at the upper end of the scale, and are barely lowered when touring nationally or internationally. However, many actors from the original productions will not see any of the huge profits made from these adaptations, despite doing so much to popularise many of these shows in the first place (West Side Story is obviously a different case). When The Prom was adapted, the cast of experienced Broadway performers were jettisoned, despite the play receiving eight Tony and five Drama Desk Award nominations respectively, including for Leading Actor and Actress categories in both. Director Ryan Murphy said that his desire for a new cast was “a decision that I made very early on […] I wanted to make my own thing and explore my own vision of it”[vi], which makes commercial sense, but it presents another instance of a problem that has only recently begun to be addressed, and whose significance points to the radical precarity of the stage actor’s work. In 2016 the cast of Hamilton struck a deal to ensure some share of the work’s future earnings, and this has allowed for more financial stability for those actors who assist in a play’s original development. Since 2019, actors and stage managers who help develop a show have been entitled to split 1% of future earnings for a decade or more, including revenue generated from touring productions. While this was an historic agreement, it only comes into effect after a show is profitable, and the financial gains from a film adaptation are not considered. For performers from shows like The Prom, then, there is no straightforward or definite route to financial or professional rewards, even with high profile cinematic adaptations.

Casting will never be fair or uncontested, but at the very least it should not actively, in the words of Ashley Lee, “leave the original cast members hanging – and render invisible the work they’ve done to make the production what it is in the process”[vii]. This is not a process that can be completed overnight, or even one that going to be secured by financial arrangements. In many ways it requires a cultural and attitudinal shift. While it can be captivating to see a screen star on the stage, veneration of these performers can have very real effects on the ability of theatre actors to secure lasting, rewarding work. Stage actors, in both America and the U.K., contribute a huge amount to the development and popularisation of many beloved shows and films, and they should be recognised and paid for their labour, not cast off in favour of greater profits and commercial success.

[i] Guardian Film, “Eddie Redmayne: playing a trans character in The Danish Girl was a mistake”, The Guardian.com, November 22, 2021, https://www.theguardian.com/film/2021/nov/22/eddie-redmayne-playing-a-trans-character-in-the-danish-girl-was-a-mistake

[iii] Kenneth MacGowan, “When the Talkies Came to Hollywood”, The Quarterly of Film, Radio and Television, 10, no. 3 (1956): pp. 288-30, https://www.jstor.org/stable/pdf/1209987.pdf?casa_token=xE4w-zoG_FsAAAAA:TZLHRjH_3Y-m_Q1zTjI949H0ubds2nybP4yTdM6F1yIOvrwrUxOa8AUaHzzPHtFo7PzEO3GfA_JSxhhSVp_jAAppb6BKwvHsIsHkI4RzbFt7-ji0xUb_

Dr. Ciarán Leinster received his PhD in North American Literature and Culture from the University of Seville in 2019, with his dissertation entitled Postmodernism, or, the Changed Logic of Late Arthur Miller. He teaches at University College Dublin and Trinity College Dublin, has presented papers on various aspects of American literature and culture at conferences in four European countries, and is the producer and co-host of The Arthur Miller Society Podcast.
View all posts by Ciarán Leinster →
Tagged  Adaptation, Drama, Drama and Cinematic Adaptation, Film, Hollywood, Theatre, USSO Special Series.
Bookmark the permalink.