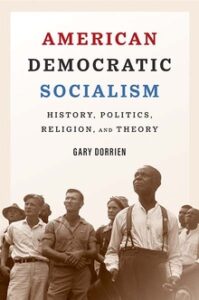 Over recent years, American democratic socialism has experienced a remarkable revival. This includes Bernie Sanders and Alexandria Ocasio-Cortez’s electoral success, but also the transformation of institutions like the Democratic Socialists of America (DSA) from a 6,000-member organisation with an average age of 68 in the mid-2010s to a 94,915-strong group with an average age of 33 by 2021. But as Gary Dorrien uncovers in American Democratic Socialism: History, Politics, Religion and Theory, this politics has a history that stretches back long before today.

Building on recent works that trace American socialism’s past, such as those by Jack Ross, Christopher Phelps and Howard Brick, Dorrien’s narrative is the most thorough of them all. [1] Taking its starting point in socialist communities in the nineteenth century and ending with the 2020 Bernie Sanders campaign, Dorrien leaves few stones unturned in telling an intellectual and institutional history. As well as the book’s comprehensive quality, the author’s own attributes add much to the work. An activist in DSA and its forerunner the Democratic Socialist Organising Committee (DSOC) since the 1970s, Dorrien brings a biographical quality to parts of later chapters, using his experiences as an activist in Upstate New York as a window onto this period’s democratic socialism. But even more unique is his theological background, meaning that the book goes beyond the usual secular focus of studies of American democratic socialism.

In the book’s key argument, Dorrien outlines the fundamental Americanism of democratic socialism, demonstrating this most lucidly in the case of Eugene Debs. The Socialist Party (SP)’s most successful presidential candidate, winning 6% of the national vote in 1912, Debs was profoundly influenced by his Terre Haute, Indiana upbringing. This was shown in his reverence for the ‘small-town values’ of the American frontier, something that was being destroyed by industrial capitalism’s relentless expansion. As Dorrien astutely suggests, this romanticised view ignored the capitalist motives of those that established the frontier, and Debs’ own desire to become an industrial worker over the objections of his education-focused French immigrant parents. This stress on Americanism was also prevalent rhetorically. Debs spoke upon his release from Woodstock Jail in 1895 of his belief in the Declaration of Independence, with a Jeffersonian stress on the danger of ‘money power’ corrupting the American Republic’s ideals in the context of Gilded Age decadence. But this Americanism also manifested in ways that constrained democratic socialism’s potential, most prominently in its inability to disentangle itself from the segregated society of the early twentieth century. The views of SP elders on race and immigration issues ranged from white supremacy to colour-blind egalitarians who sought to avoid these issues to preserve the party’s influence with anti-immigration and anti-integration trade unions. These attitudes disengaged it from African-Americans and the growing class of immigrant workers.

The second major contribution comes from its exposition of religious socialism. Helped by Dorrien’s background as a theologian, the book brings an expertly detailed perspective on the interaction between religion and socialism, with the ethical and moral grounding of religious socialists since the nineteenth century leaving a distinctive imprint upon democratic socialism throughout its history. Norman Thomas’ interwar leadership of the SP provides a particular reference point, with the background of Debs’ successor as a Social Gospel-influenced Presbyterian minister formative for his emphasis on pacifism and civil rights. Dorrien reinforces this later by evidencing how religion continued to be important even over non-religious socialists. The late twentieth century’s key socialist Michael Harrington abandoned Catholicism in his youth but was still deeply affected by that same stress upon morality and saw religion as a crucial organising tool for democratic socialists, making a Religion and Socialism Commission a key aspect of his multi-tendency SP successor, DSOC.

The book occasionally suffers from an imbalance between its institutional and intellectual history. Although this equilibrium is mostly maintained, its early and middle chapters lean more heavily on the institutional history of the SP, whilst content related to the DSA’s trajectory after the Cold War is sparing in contrast to the highly detailed accounts of academic debates occurring in the 1990s and 2000s. On a stylistic note, the book’s thoroughness makes it exceptionally long at 594 pages, and its chapters are just as expansive, ranging from a 41-page introduction to a 98-page chapter, ‘New Left, Old Left, and Michael Harrington’. Given the distinctiveness of many moments within, as well as between, chapters, American Democratic Socialism would have benefited from some shorter chapters, so that the idiosyncratic character of these eras could be dwelt on more explicitly.

In summary, Dorrien has made a highly important contribution to the study of American democratic socialism. A well-balanced work that avoids the deification and demonisation that is too often present in studies of the American left, American Democratic Socialism provides an extensive history of an understudied segment of American politics. It also gives the subject much needed complexity, showing it as a flawed but essentially American and adaptable form of politics. Although the book could at times better balance institutional and intellectual history, Dorrien provides a much firmer basis for historians to understand this phenomenon, and with it one of the most important elements of contemporary America.

Review: 'American Studies after the Digital Turn'
Review: Bellows and the Body: the Real, the Ideal and the Nude
Review: Seventeenth Annual Conference of the Scottish Association for the Study of America

Alex Riggs is a second-year PhD student in History at the University of Nottingham, funded by Midlands4Cities. He researches the 1970s and 1980s American left, using case studies from local and national politics to trace their intellectual history and organisational efforts. He also co-organises the Contemporary Political History Seminars at Nottingham and is an assistant editor of the Midlands Historical Review. You can follow him on Twitter @AlexRiggs6
View all posts by Alex Riggs →
Tagged  American Politics, Book Review.
Bookmark the permalink.