Book Review: Philosophy for Spiders: On the Low Theory of Kathy Acker by McKenzie Wark 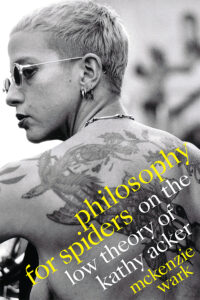 McKenzie Wark’s work over the last decade and a half has delved into a remarkably vast array of themes and problems, running the gamut from the politics of forms of communication, to the relevance of early Soviet thought in the Anthropocene, via a series of books on the Situationist International. If there has been a common thread to these studies, it may be Wark’s account of low theory—a compellingly protean articulation of the possibilities for theoretical production from below, beyond the canonisation of High Theory. In Philosophy for Spiders, Wark’s polymorphous reading of the life and work of the experimental novelist (and Wark’s one-time lover) Kathy Acker, low theory takes on yet new valences, coming to mean ‘a philosophy for brutes: women, slaves, beasts’ (54), of which Acker’s work is exemplary.

Central to this project, for Wark, is the possibility of an Acker ‘who write[s] for trans bodies and not just cis bodies’ (104). Yet to say that Wark simply constructs a ‘trans Acker’ risks oversimplification: what she really tries to do is tease out the coexistence of multiple Ackers. Beginning by distinguishing between ‘Kathy’ (the person) and ‘Acker’ (the texts), then expanding outwards, we arrive at a multitude of Ackers apprehended across her sprawling body of work: sex worker Ackers, bodybuilding Ackers, and psychogeographer Ackers, to name but a few.

Philosophy for Spiders’ first part is an account of Wark and Acker’s 1990s love affair, in which passages from critical work on Acker, borrowed wholesale, are interspersed. This is a narrative full of tangents and diversions: we depart, then return to, the real experiences of the author and her subject. Wark’s gloss of the section as a discussion of ‘Kathy, as a body that fucks’ (6) is appropriately pithy: sex, and in particular sex as an incipiently or explicitly trans experience, is foregrounded in these passages. But ‘fucking’ carries other meanings besides. Vitally, for Wark it just as often means fucking with: fucking with gender and, via the close connection that Wark finds between writing and sex, fucking ‘with genre, that most nucleated family of forms’ (5).

In the book’s second part, Wark turns her attention away from ‘Kathy’ to ‘Acker’; that is, away from the ‘body that fucks’ toward the body of work. Here Wark introduces the distinction, vital to her reading of Acker as low theorist, between first, second and third philosophy. In a détournement of the High Theory tradition of Aristotle, in which ‘first philosophy’ entails a search for metaphysical foundations, for Wark it is instead the embodied philosophy of the self. Second philosophy describes relationships with others; while third philosophy involves encounters with worlds (cultural, economic, or urban worlds, for example). Chapters on each of these are further subdivided into thematic sections on broader (‘Time’, ‘Desire’, ‘Politics’) or narrower (‘Solitude’, ‘Masochism’, ‘Holes’) themes. As such, though Philosophy for Spiders is a short book on one author, which doesn’t go into much depth on any text and discusses a relationship that was short-lived, Wark covers an impressive amount of ground.

Especially compelling in this regard is the rumination in ‘Second Philosophy’ on ‘Engendering’, which is where Wark’s trans Acker is most vividly drawn. Here she brings together passages from Acker’s work that suggest a move beyond the gender binary, in ways that do justice to the open-endedness of the source material while also making plain Acker’s relevance to contemporary trans perspectives. Elsewhere, Wark’s teasing-out of Acker’s sense of the possibilities and pitfalls of transformational politics—her wariness of projects that replace old authorities with new ones without challenging the principle of authority (141)—suggests that the revolutionary Acker may be among the most interesting Ackers.

This sort of expansive reading, in which Acker is found to have answers to a wide variety of questions, does carry the risk that Acker may be ventriloquised in retroactive support for arguments Wark has made elsewhere. This problem is most apparent when Wark returns to the argument of her Capital Is Dead (2019), which proposed that the coming of the digital age has constituted a shift to a new, still more exploitative political-economic modality. Wark’s determination to enlist Acker, who only lived to see the earliest developments in this direction, as a herald of postcapitalism, is in this regard not wholly convincing. This is in part a function of Wark’s pick-and-mix approach to the Acker corpus, dealing in illustrative gobbets rather than close readings. Sticking with the texts for slightly longer, and delving slightly deeper, would perhaps allow her to make these connections more apparent.

Philosophy for Spiders will be of a good deal of interest, though, not only to scholars of Acker or to those working on trans literatures, but also to students of contemporary literature and culture more broadly. Readers of Wark’s prior work will also certainly find many productive connections and new directions here. The book is not, it must be said, an introduction to Acker; some prior familiarity with her work is assumed. But as a study that approaches a vitally important author from numerous compelling new angles, it is of great value.

Frankie Hines received his PhD in English Literature from the University of Westminster in 2021. His doctoral thesis, entitled Evading Representation: The Literature of Contemporary U.S. Anarchism, considered U.S. anarchist movements since the 1990s as sites of literary production, and explored possibilities for anarchist literary theory. In Spring 2022 he will be an Early Career Visiting Scholar in American Studies at Northumbria University.
View all posts by Frankie Hines →
Tagged  Book Review, Contemporary Fiction.
Bookmark the permalink.