In December 2021, I was delighted to have the opportunity to present a paper on my ongoing PhD research at the BAAS Postgraduate Symposium. Sitting at an intersection of ethnomusicology, American studies, and the sociology of music, my PhD is the first ethnomusicological study of female country performers in the 21st century. It examines how gender, or the perception of gender, has shifted in the genre, and how it has been influenced by socio-economic and technological advancements since 2000. In this short article, I will provide an overview of my approach and of the historical background and contemporary developments which have led me to embark on this important study. 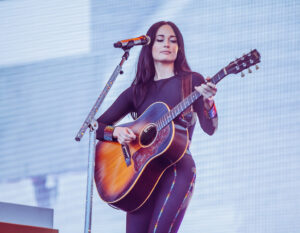 “Kacey Musgraves” by rocor is licensed under CC BY-NC 2.0

Gender roles in country music are long established, with ‘a rigid male/female binary’.[i] Gendered double standards are common, with male managers ignoring ‘indiscretions’ by their male stars, while McCusker suggests female performers were ‘ruthlessly controlled’ from the 1950s onward.[ii] Gender biases are perpetuated through country radio, where the myth that ‘women don’t want to hear women’ developed, thus restricting female performers’ access to the genre’s predominant marketing platform.[iii] This positioning of women as passive listeners, rather than active performers, began in the 1920s when advertising revenue funded an explosion in country radio stations. They called on male performers to sell products to housewives who remained at home, in line with the strict conservative and religious values of the South.[iv];[v]

While country music has never actively excluded female performers, the manifestation of gender in the rural South followed unwaveringly strict socio-economic boundaries which governed society for much of the 20th century.[vi] Through the 1960s and beyond, men were considered the ‘commercially successful recording stars’ and women the ‘non-commercial support system’.[vii] These beliefs and ideas can be considered a through line in country music right up to the present day. In 2015 the issue was again brought to the fore when country radio consultant Keith Hill referred to female performers as ‘the tomatoes in our salad’.[viii] Hill’s comments were further exacerbated when the head of the Sony Music Nashville record label announced in the same year that, ‘If you’re not on country radio, you don’t exist’.[ix] This clear manifestation of gendered gatekeeping led to a wave of social activism centered around the #SaladGate campaign and the mid-2010s re-emergence of the #MeToo movement.[x];[xi]

Country music, then, walks a fine line between commercialisation and authenticity, limiting women’s music to focus on the supposed prowess of male stars because they will make you more money.[xii];[xiii] This makes it a unique genre in which to study historical representations of gender, the extent to which they have persisted, and what impact societal and technological change has made.

In my research, I am employing the emerging methodology of hybrid ethnography. It builds on the work of Przybylski and Pink et al. who suggest that 21st century ethnography ‘requires a critical skill set to tell an analytical story [which] cuts across both digital and physical spaces’.[xiv];[xv] I will be engaging with my field online over an 18-month period; through observation on social media, close readings of websites, concert listings, blog posts and media, I will be researching change where it has taken place. Several shorter fieldtrips, starting with six weeks in Nashville in May–June 2022, will then afford me the opportunity to augment my findings in the digital space, with research carried out in person.

In recent years, there have been some signs of progress. In February 2019, Kacey Musgraves won the country and all-genre Grammy for ‘Golden Hour’.[xvi] In November, the Country Music Association Awards spotlighted female performers, and was hosted by three female stars: Dolly Parton, Reba McEntire, and Carrie Underwood. However, that night, the truth about the genre’s gender-bias problem was on prominent display, when the flagship award for Entertainer of the Year was presented to Garth Brooks, over Underwood who was the only female artist nominated. Brooks is a male artist who had released no music and performed only five times that year. In this way, it is hard to see the show as anything other than a tokenistic gesture by the CMA.[xvii]

Elsewhere, in 2020, Mickey Guyton became the first Black female solo artist to sing her own song at the Academy of Country Music Awards, and in 2021 she was invited to co-host the ceremony.[xviii];[xix] At the same time, however, female country superstar Taylor Swift was engaged in a protracted legal battle with music mogul Scooter Braun, who Swift accused of ‘incessant, manipulative bullying’; the result of which left Swift with ‘no option’ other than to re-record her previous six studio releases.[xx];[xxi]

What then, is the situation on the ground? To what extent has technology allowed female country performers at a grass roots level to circumnavigate traditional gatekeepers such as country radio, influential record label executives, or powerful industry bodies, in the years since 2000? Or does technology itself introduce new gatekeepers in the form of computer algorithms, paywalls and curated playlisting?

The key questions I wish to answer are:

In the first decades of the 21st century we have seen rapidly developing technological and cultural change, which has led us to re-evaluate our past through a new lens.[xxii]  Country music, like all forms of cultural expression, is not immune from this change. I hope my study will go some way towards examining what this means for female performers in a genre that has relied for too long on its reputation as a white, male dominated, conservative music of the rural South.

Ben Atkinson is a PhD candidate at the University of Lincoln. His PhD in Ethnomusicology explores the experiences of female country performers in the US from 2000-2021, with a particular focus on gender biases and gatekeeping, through the lens of social movements such as #MeToo and the vast technological change bought about by streaming media the internet. In addition, Ben is a musician who released his first folk/country album in 2020 and he has written and presented the syndicated radio programme, Ben’s Country Music Show, broadcast on stations around the world for the past fourteen years.
View all posts by Ben Atkinson →
Tagged  Country Music, Gender, Musicology.
Bookmark the permalink.