One distinct advantage of the breadth of a field like American Studies is that the same prompt may be honestly engaged by a host of scholars without fear of repetition, only resonance. The unifying theme of the 2021 BAAS postgraduate symposium was ‘Visibility/Invisibility: Representation and Community Formation in American Studies’. Twelve short papers and a keynote address were presented by young academics, each one taking up, reframing or projecting a specific community as its subject. In the interest of brevity, this review will focus on those papers most relevant to my own work. All thirteen of them, however, merit serious consideration.

From the first panel, arguments spoke across space to one another. Mori Reithmayr (University of Oxford) argued that José Sarria’s vibrant (if unsuccessful) run for mayor of San Francisco in 1961, the first by an openly gay man, was not evidence for the existence of a gay community already extant in the city, but a public expression of aspiration that one might soon come to be. Within the decade, that hope would be realised. On the other hand, while the lesbian magazine The Ladder was founded in the same city just five years earlier, in 1956, Catherine Kelly (King’s College London) showed that the attitudes and identities of its readers and contributors were closely and deliberately guarded. The Eisenhower administration of the late 1950s was openly homophobic, prohibiting especially any expression of gay ‘obscenity’. So, fearing state surveillance and reprisal, contributors to the magazine typically wrote anonymously, some under numerous pseudonyms, and the magazine’s mailing list, containing the names of up to a thousand gay women across the nation, could be kept on paper only on the condition of strict secrecy. This meant that while The Ladder provided a guiding voice for a like-minded group, the nationwide community that the magazine’s popularity might have brought together was instead effectively suppressed, since the names and addresses of subscribers were known only to the editors. In the balance of these two examples, it becomes clear that much of the power and longevity of a community lies in its members’ ability to determine for themselves if, when, and to what degree they express that sense of belonging visibly. 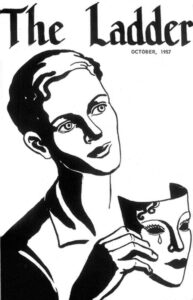 This theme was complicated by work presented in the second panel. James Barker (Newcastle University) presented recent covers of Dolly Parton’s classic country anthem ‘Jolene’ by The White Stripes, Lil Nas X, and others, as potential expressions of homoeroticism. Using these examples, Barker was able to persuasively suggest queer reading as a means of community reclamation, a way for a group traditionally excluded from the heteronormative country music industry to find its place. And as Naomi Smith (Birkbeck, University of London) made clear in her analysis of American newsrooms and their typically limited assessments of a given story’s newsworthiness, there is a clear correlation between the diversity of a community and the scope of its values. These presentations illustrated that the same redundancy equally threatens newsrooms, boardrooms and classrooms that are slow to adapt. New ways of reading and presenting narratives can build and expand communities. Adherence to obsolete approaches can cause the deaths of others. 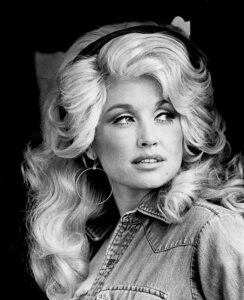 It is one thing to see the way forward, however, and quite another to document the process as it happens. Some of the hardest subjects in American Studies are those that assess communities still in formation, since no grand culmination has yet come to serve as hook for the researcher. This is the comforting trick that good writers can perform: to have the reader mistake one perspective on history for a full view of the past. The civil rights movement, for example, is so often represented as the cross-carrying journey of certain significant men, like Dr. Martin Luther King, Jr., to their martyrdom at the mountaintop, that to suggest an alternative reading can be subversive in itself. The million everyday tasks that constitute the real business of community-building transform on the page into something neat, complete, and unquestionably significant. Co-sponsored by BAAS and US Studies Online, Riziki Millanzi’s (University of Sussex) keynote presentation exposed the flaws in this approach when analysing the ongoing emergence of a worldwide online community.

#BlackGirlMagic, Millanzi argued, acts as a ‘rallying call’ for young Black women every time it is tweeted. By designating a set of shared reference points for positive representations of modern Black femininity across film, visual art and literature, the hashtag helps members of a burgeoning community to generate their own visibility and forms of expression. And in its emphasis on fostering love from within, Millanzi contended that #BlackGirlMagic, as a community-forming tool, might even function as a political frame, working to strengthen and support Black women when they turn again to engage with the dominant white masculine culture. The importance of work like Millanzi’s is to document a positive project before the inevitable cynicism of the historical process can affect it. Even if #BlackGirlMagic were abandoned as a calling card within the next five years, its significance and potential today would not be lessened, and the work done to assess its impact on people’s lives would remain essential. 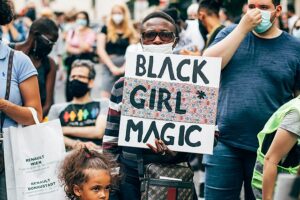 This year’s symposium was once again held via Zoom, a concession made to the ongoing limits on safe activity. As the great success of the event showed, ‘online’ is still a venue with enormous potential. However, during a roundtable discussion on the viva process, featuring three recent graduates and two experienced supervisors, a concern about the ever-expanding online presence of the postgraduate community was noted by several attendees. While social media, and Twitter in particular, has provided an unprecedented space for researchers to connect across potential barriers of every kind in the last five years, the same technology may also be an arena for competition. Particularly pernicious to the nerves of the pre-viva doom-scroller is the elevated visibility of posts like ‘Passed with no corrections! [Party hooter emoji]’. Does it really matter, an audience member asked, whether a thesis passes with or without corrections, or is an unnecessary wedge being driven between us? Dr. Theresa Saxon (University of Central Lancashire) and Dr. Laura Rattray (University of Glasgow) suggested that in fact the initial award of passing classifications that call for ‘minor’ or ‘major corrections’ typically yield a better, more polished thesis in the end. No doubt the ultra-competitive academic job market incentivises the self-promotion of any distinguishing mark or proof of excellence, and it is good to celebrate success together. But it is surely not helpful to give those still earning their degrees the false impression that a qualified passing classification would make them somehow less than successful.

Though each of us who presented at the symposium has since gone back to our discrete work on a disparate subject, and the same group may never meet again, the event itself was a study in the regenerative powers of collaboration and mutual respect. It served as a strong reminder that the American Studies postgraduate community must be a universally supportive one if it is to function for the benefit of all.

Review: ‘My Dream or Yours? Make America ______ Again’, IAAS Postgraduate Symposium
Review: Investigating Identities in Young Adult (YA) Narratives
Review: ‘The “Not Yet” of the Nineteenth-Century U.S.’, British Association of Nineteenth Century Am...

Samson Thozer is a first-year PhD student in American Studies at the University of Manchester. His research concerns the formation of Black identity in interwar Detroit. He has a BA in English Literature and American Studies, and an MA in English, both from the University of Manchester. Between 2017 and 2021, he lived in the USA, teaching at Pennsylvania Highlands Community College and working with kids at the YMCA. He recently self-published a book called Halfway to Everywhere.
View all posts by Samson Thozer →
Bookmark the permalink.