Book Review: The Republican Party and the War on Poverty: 1964-1981 by Mark McLay 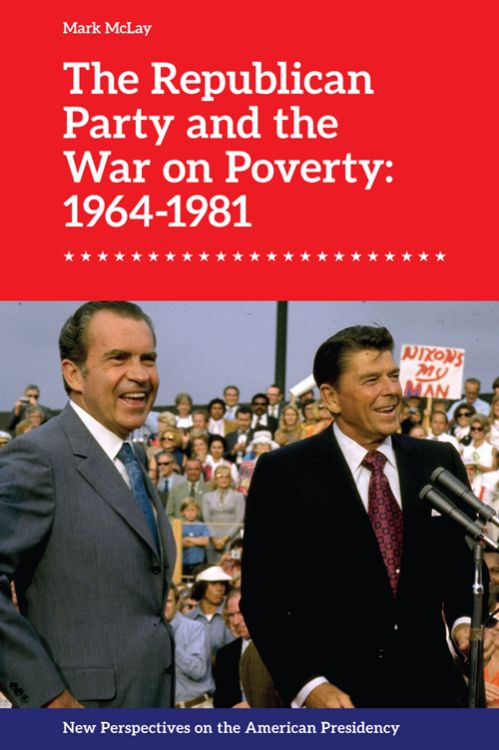 In The Republican Party and the War on Poverty, Mark McLay analyses how the Grand Old Party (GOP) responded to Lyndon B. Johnson’s War on Poverty, and the issue of poverty more broadly, between 1964 and 1981. He considers what Republican opposition to anti-poverty measures reveals about the GOP and wider US politics during this period. In chronological chapters, McLay examines continuity and change in Republican approaches to poverty. He shows persuasively how Republican reactions to the War on Poverty shaped the GOP’s enduring conservative, anti-statist, and racialised responses to poverty, alongside how anti-poverty measures were understood by the wider public, for years and decades to come.[1] McLay’s work complements a flourishing field of scholarship concerned with the GOP or particular party factions, shedding further light onto the complexities of modern Republicanism.[2]

McLay identifies two distinct phases in GOP opposition to Johnson’s War on Poverty. Between 1965-1972, Republicans often proposed ‘creative’ policies to ‘fight a better war on poverty’, hoping to overcome the GOP’s ‘“Party of Privilege” moniker’. However, the period following Richard Nixon’s re-election as president through to Ronald Reagan’s presidency, ‘saw Republicans forsake creativity and devote their energies to curtailing the antipoverty effort rather than improving it’.[3] During insightful chapters examining the mid-to-late 1960s, he highlights how Republicans successfully tied the War on Poverty to the urban rebellions the US had witnessed for successive summers. Republicans, especially in the House, cast Johnson’s poverty programmes as explicitly aiding Blacks in cities and criticised the War on Poverty for fermenting, rather than forestalling, domestic unrest. Republicans instead proposed stronger crime policies to enforce ‘law and order’. McLay demonstrates adeptly how racially coded attacks on federal poverty policies, paired with appeals to restoring order, became Republican staples – typified by Ronald Reagan’s caricature of the Black Chicago ‘welfare queen’. By negatively associating anti-poverty reforms with African Americans, Black disorder, and welfare dependency in the minds of many white Americans, Republicans succeeded in curtailing future efforts to use federal power to alleviate poverty.[4]

The book also illustrates how ideologically variant Republicans responded to the War on Poverty in different ways, highlighting the non-homogenous nature of the GOP.[5] McLay proposes a useful distinction between ‘order’ and ‘justice’ Republicans who offered conflicting remedies to urban rebellions, based in either tougher law enforcement or expanded social welfare provision.[6] For example, in the wake of Martin Luther King’s April 1968 assassination and the resultant ‘King Riots’, progressive Republicans proposed stronger anti-poverty programmes to address Black urban plight, while conservatives attacked anti-poverty policies for encouraging African Americans that riots produced results.[7]

McLay is part of a wave of historians challenging the declensionist narrative of political development long championed by scholars of conservatism and Republicanism. Donald Critchlow and Mary Brennan depict a conservative ascendancy in the twentieth century GOP, drawing a largely straight line from Barry Goldwater to Ronald Reagan. McLay’s book challenges this narrative, illustrating how the Republican story is not so linear and highlighting competing voices in the GOP.[8] In doing so, McLay fulfils Kim Phillips-Fein’s call for more scholarship considering GOP intra-party battles.[9]

While a compelling and convincing read, The Republican Party and the War on Poverty is concerned almost exclusively with elite politics. McLay states that he is focusing on Congress because elected Republicans were, in Nixon’s words, ‘in the arena’.[10] Considering how GOP activists and ordinary voters approached the War on Poverty would have added further depth to his analysis. This grassroots perspective is a critical avenue for future research.

The Republican Party and the War on Poverty is an important study which elevates understanding of the twentieth century GOP, modern conservatism, and the fate of Great Society liberalism. It is invaluable for anyone seeking to understand how the Republican Party, but also American politics more broadly, changed in the second half of the last century – particularly why policies expressly targeting poverty, rather than offering universal benefits to all, have retreated from the political mainstream.

Most Viewed Posts of 2015
Book Review: Stuff Theory, Everyday Objects, Radical Materialism by Maurizia Boscagli
Book Review: The Politics of the Body: Gender in a Neoliberal and Neoconservative Age by Alison Phip...

Tim Galsworthy is a History PhD candidate at the University of Sussex. He is funded by the CHASE AHRC Doctoral Training Partnership. Tim's research focuses on American Civil War memory and the Republican Party in the civil rights era. Tim's first journal article – "Carpetbaggers, Confederates, and Richard Nixon: The 1960 presidential election, historical memory, and the Republican Southern Strategy" – is out now with Presidential Studies Quarterly. He is currently a member of the Southern Historical Association Graduate Council.
View all posts by Tim Galsworthy →
Tagged  American History, Book Review, Presidents, Republicans.
Bookmark the permalink.