“Your Name is Safe”: The Ladder as lesbian literary community

In the second issue of the Ladder – the San Francisco-based lesbian literary magazine that circulated between 1956 and 1972 – Ann Ferguson published an article intended to reassure nervous subscribers, titled ‘Your Name is Safe.’ Ferguson acknowledged readers’ fears that “names on our mailing list may fall into the wrong hands.”[1] This was a euphemistic reference to the FBI, and lesbian subscribers had reason to be cautious. The first issue of the Ladder appeared three years after Dwight D. Eisenhower barred queer workers from federal employment, initiating a nationwide anti-gay witch hunt known as the Lavender Scare. Members of the Ladder’s parent organisation, the Daughters of Bilitis (DOB) had been under state surveillance since DOB’s founding in 1955. Accessing their FBI files in 1981, DOB founders Del Martin and Phyllis Lyon were surprised to discover just how many of the participants in their panel events had been federal agents.[2] In ‘Your Name is Safe’, however, Ferguson deliberately downplays the risks of censorship and surveillance in an effort to expand the Ladder’s semi-public queer literary community.

In the early decades of the twentieth century, lesbian communities were generally tied to specific institutions – the armed forces, the women’s college, the bar, the prison – or they developed through informal friendship networks. These communities formed through physical proximity and subterranean whisper networks. Queer women in this era did not “come out” in the contemporary sense of public disclosure; instead, they “came into” an underground world of gay life. Within these spaces, a lesbian might be relatively safely hidden or highly criminalised and surveilled, depending on class and racial stratifications, but for virtually all queer women entry into lesbian life was contingent on a volatile mix of chance and curiosity. The Ladder was not the first lesbian magazine in the US – that was the short-lived Vice Versa, published in Los Angeles in the late 1940s – but it was the first lesbian mailing list.  The Ladder’s mailing list was an attempt to formalise the whisper network. Over sixteen years, the Ladder’s editors and contributors grappled with the tensions between the demands of privacy and security, and the desire to build a national lesbian literary community. 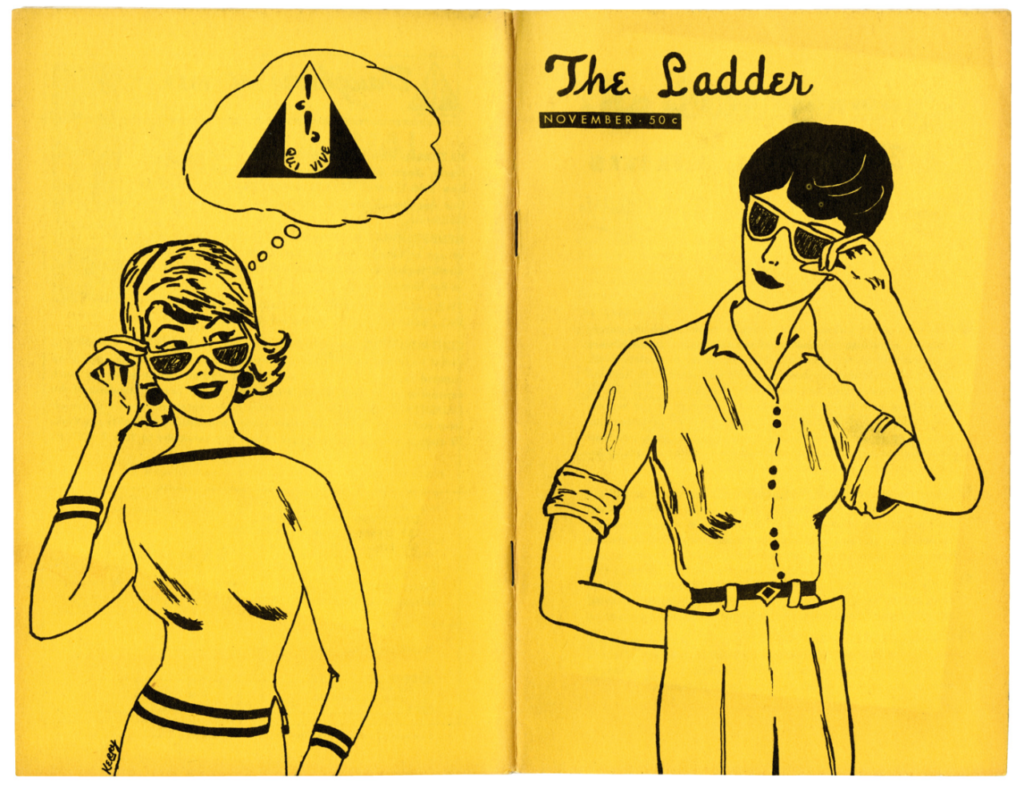 For most of the magazine’s lifetime, its reach was small. It hovered around 1000 subscribers, climbing to roughly 3800 in its final years under the editorship of Barbara Grier. It was Grier who handled most of the Ladder’s correspondence, responding to endless expressions of gratitude, frustration and loneliness from women across the country. Many of these readers described holding reading parties and passing single copies of the Ladder around friendship groups. Behind the small number of women who were willing to sign their names was a much larger community.[1]

Much has been written about the Ladder’s broadly conservative, assimilationist politics, and the development of its mailing list reflects this.[2]  Its founders were not seeking to build just any community, they wanted a network of middle class, law-abiding lesbians – women who were a picture of post-war conformity in all ways but one. In an attempt to build a base of respectable subscribers, unsolicited copies of the first issue of the magazine were sent to lawyers, doctors and other professionals whom the editors believed were either lesbians or sympathetic to the cause. It was largely the women of this upwardly-mobile set, fearing threats to their safety and job security, whom Ferguson is addressing in ‘Your Name is Safe’. In her attempt to assuage these fears, she writes that “Daughters of Bilitis is not outside the law– we advocate no illegal actions by anyone.”[3] Contributors to the magazine often leaned heavily on the technical fact that being a lesbian was not illegal per se, though their consistent coverage of police raids on lesbian bars attests to the fact that such technicalities did not prevent surveillance and harassment of queer women.

The firmly optimistic tone of these editorial interventions often belied the mood within the organisation. Grier recalled that “people would go into rooms and pull the damn shades down […] the paranoia was pretty high.”[4] Perhaps most revealing is the fact that ‘Your Name is Safe’ was written under a pseudonym: “Ann Ferguson” was Phyllis Lyon. Lyon came clean in a 1957 article titled ‘Ann Ferguson is Dead.’ I confess, I killed Ann Ferguson. […] now there is only Phyllis Lyon.”[5] With much faith in the power of positive thinking, she concludes: “I’m sure I’m not placing myself in any jeopardy by using my real name – and I’m only simplifying matters and practising what I preach.”[6] Yet pseudonyms continued to be common within the pages of the Ladder. As late as 1968, new members of DOB recalled that they were advised not to use their real names.

Ultimately, this emphasis on security became a source of vulnerability for the Ladder. Fearing that it might “fall into the wrong hands”, to quote Lyon, only two copies of the mailing list were created. In 1970, Grier and the current DOB president, Rita Laporte, took these copies from the San Francisco office, and began publishing the magazine from Reno, Nevada. This was a grave betrayal in the eyes of many DOB members, one of whom recalled finding the office “in disarray, the membership list missing, and all the stuff about The Ladder missing. So everybody thought it was the cops or the FBI. […] What lesbian would come and do a thing like this, you know, who would dare?”[7] By gaining control of its mailing list, Grier and Laporte severed the Ladder from DOB. Many of its subscribers, and one crucial anonymous donor, revolted and the magazine lasted another two years before it folded. Grier later used the list to help finance Naiad Press, the lesbian feminist publishing house that she founded in 1979. She did so both by using the list as a marketing resource and by selling copies to some of the many other feminist presses that sprang up in this era. By the late 1970s, there was a small but substantial market for lesbian writing, and the mailing list that had once posed a security risk had become a financial asset. Reflecting on her theft of the list in 1987, Grier acknowledged that this act “killed” the Ladder. Yet in her view, this was just another part of her literary mission: “The mission is that the lesbians shall inherit the earth.”[8]

The Best of 2016, and What's next in 2017
Judge Dredd’s Burger Wars: Intellectual property, self-censorship and new exceptions
Folklore and Gay Literature: The Making of a Community

Catherine Kelly is a second year PhD student at King's College, London, studying lesbian feminist literary networks in the United States between the 1950s and the 1980s. Her writing can be found in the Cardiff Review, the Dublin Review of Books, Still Point Journal and Datableed.
View all posts by Catherine Kelly →
Tagged  LGBTQ History, Research.
Bookmark the permalink.