As the Australia and New Zealand American Studies Association met for its biannual conference on November 24-25th, the conference’s key themes of ‘American Crisis’ and ‘American Renewal’ were kept in an incredibly fine balance. Hosted by the Macquarie School of Social Sciences, ANZASA 2021 was the Association’s first pandemic-era conference and was predictably haunted by the spectre of Trumpism. The overall emphasis was understanding America’s history as one of perpetual crisis, registered not only in political instability or economic decline, but also, perhaps most corrosively, in interpretive struggles over the nation’s future trajectory.

Professor Michael Thompson  (Australian Catholic University) opened the programme with his keynote, ‘Environmental Crisis and Renewal in the Global New Deal Era: A Biography of the “Eleventh Commandment”’. This ambitiously wide-ranging lecture explored the Global New Deal through a combination of environmental, religious, and transnational history. Professor Thompson prefaced his lecture by stating ‘it sounds ambitious, and it is’. His keynote investigated the ‘Eleventh Commandment’, a parody of the Ten Commandments written by the soil conservationists Inez and Walter Lowdermilk to comment on the global soil erosion crisis of the 1930s. 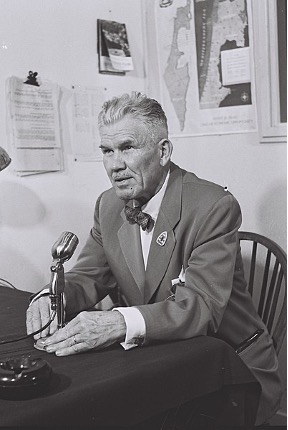 This crisis greatly concerned the Lowdermilks, a husband and wife team who investigated famine prevention as missionaries in China and took to publishing the dangers of ‘accelerated [i.e. anthropogenic] erosion’ as part of the Soil Conservation Service. One of the ‘success stories of the New Deal’, this service published the Lowdermilks’ report on agricultural practices witnessed during their travels around the Mediterranean, Conquest of the Land through Seven Thousand Years, in 1948. This work sold 1 million copies, a record for a U.S. Department of Agriculture publication, and warned of an accelerating desertification caused by humanity’s failure to respect its limits, describing the decaying lands around the Mediterranean as ‘morgues and graveyards of past civilizations.’ The chief message, disseminated rapidly through sermons and agricultural reform movements, was that America had to rigorously reform its agricultural policies to avoid this fate. Within this settler theo-political imaginary, planning equated to nothing less than salvation. The Eleventh Commandment’s deliberately civil religious tone lamented humanity’s collective sins against the earth whilst stressing the redemptive possibility that New Deal-style planning, exported globally following the Tennessee Valley Authority’s model, could make the landscape anew.

Over the two ensuing days, thirteen diverse panels demonstrated ANZASA’s steady diversification from its beginnings as a primarily history and literature-oriented organisation, ranging thematically from ‘America on Screen’ to ‘American Literature’ and chronologically from ‘Slavery’ to ‘Political Life Since the 1970s’.

A following panel entitled ‘The Polarization of America?’ answered their remit with a resounding yes. David Goodman (University of Melbourne) convincingly argued that historians should have more to say about the increasingly pressing matter of polarization in the United States, illustrating that ‘echo chambers’ and a distrust of conventional media are not unprecedented but were instead common in equally polarized debates over American intervention in WWII. Samuel Lucas (University of California-Berkeley) illustrated his ‘preliminary analysis’ into logics of solidarity in twentieth-century America through decisions taken by characters in critically-acclaimed films, complete with a short clip from Jurassic Park. Finally, Thomas Cryer (University College London) explored the reformation of civil religion in late-twentieth-century America’s ‘Age of Fracture’ through an examination of commemorations of 1976’s American Revolutionary Bicentennial, showing how rehearsing America’s revolutionary narratives offered a salve to conceptions of social dissension, hedonism, and narcissism, albeit only temporarily. 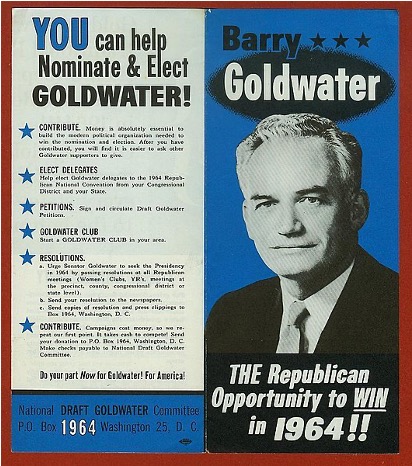 ANZASA 2021 perennially circled back to themes of race, particularly during a remarkable 10th Panel on ‘Race and Civil Rights’. These papers all shared an irony-infused pessimism, utilising Jacquelyn Dowd Hall’s theory of the ‘long civil rights movement’ to highlight racism’s continuing hold on American society. D. Caleb Smith (Tulane) poignantly explored ‘Twenty Years of Workplace Struggle’ through Louisiana lawsuits invoking Title VII of the 1964 Civil Rights Act, highlighting the links between the long civil rights movement and the tolls of deindustrialisation on Black workers. Harry Melkonian (Macquarie) traced the dramatic post-war decline in Black support for the Republican Party to 1964’s Goldwater platform (shown right), arguing that southern racial attitudes became predominant within national GOP politics thereafter, tying the party of Lincoln to an ideology of racial intolerance. Only hours after Travis and Gregory McMichael and William Bryan were found guilty of murdering the jogger Ahmaud Arbery, Daniel Fleming of Macquarie pointedly argued that since the 1960s racism has materially contributed to the continuing epidemic of American gun violence. Finally, John A. Kirk (University of Arkansas at Little Rock) comprehensively overviewed the recent historiography of the Civil Rights Movement, showing how understandings of a ‘wide’ civil rights movement emphasising intersectional histories and local contexts have further enriched the insights of Hall’s ‘long civil rights movement’.

Since its establishment by Professor Norman Harper and the ‘Melbourne historians’ in August 1964, ANZASA has always prided itself on its community spirit and recreational ethos, even having for many years an ‘ANZASA songbook’. This camaraderie transferred easily to Zoom, particularly during several glowing tributes given to Professor Shane White on his retirement from the University of Sydney. Commentators led by Michael Ondaatje (Australian Catholic University) praised White, an expert on African American history, for his ‘dragnet’ research methodologies, rigorous archival work, and ability to (re)voice ordinary Americans’ lives with ‘great sophistication and flair’. Further tributes arrived via trans-Pacific emails from David Blight and Robin Kelley, the latter declaring Professor White to be ‘an intellectual soulmate’. 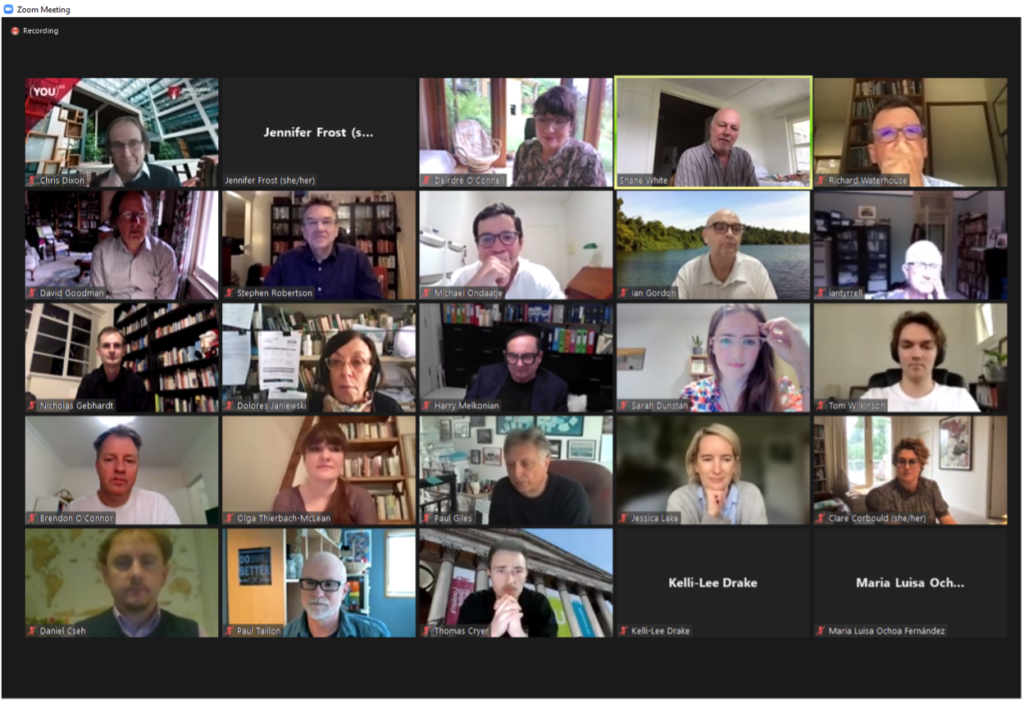 If ANZASA 2021 had a certain sombre gravity, this was perhaps because themes of crisis/renewal were lent potency by a decisive moment for ANZASA and the Australian humanities more broadly. The Morrison government has recently increased tuition fees on humanities courses, seeking to incentivise students to complete ‘job-ready’ degrees such as information technology and engineering. Further, ANZASA’s role as the primary research forum for Australian-based scholars of America has been challenged as structured research collaborations with American institutions become more common and the logistics and finances of travelling to North America become easier, opening up alternative fora.

Australia and New Zealand’s strict travel rules may have temporarily stalled this process, but the larger question of how ANZASA can best complement this era of formal academic exchange remains. Notwithstanding some perhaps inevitable glitches in Zoom room 13, contributions from younger scholars from Hamburg, Kyoto, Coimbra, Berlin, and Budapest who would not usually be able to afford the flight to Australia raised the case for generational renewal quite effectively. If themes of crisis and renewal ultimately balanced towards the former, all looked forward to ANZASA’s long-anticipated in-person reunion in 2023.

This conference acknowledged the traditional custodians of the Macquarie University land, the Wattamattagal clan of the Darug nation, whose cultures and customs have nurtured and continue to nurture this land, since the Dreamtime. All present paid their respects to Elders past, present and future.

Tom Cryer is a second-year LAHP-funded PhD student at UCL’s Institute of the Americas, where he studies memory, race, and nationhood in the twentieth-century United States.
View all posts by Thomas Cryer →
Tagged  Conference Review, Event review.
Bookmark the permalink.