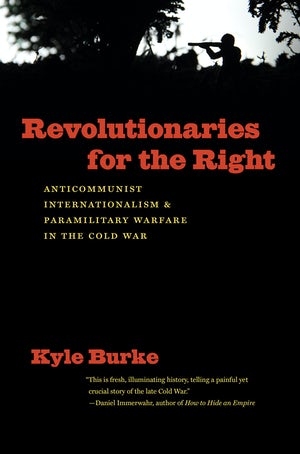 By its very nature, the American New Right was destined to have an ambiguous relationship with the state. A movement fusing Cold War hawks, social conservatives, and economic libertarians, it on the one hand called for handing over considerable amounts of money and authority to the state for ‘national security’ while on the other demanding that same state be severely restricted in its control over any aspect of national life deemed ‘the economy.’ Kyle Burke’s fascinating and illuminating book, Revolutionaries for the Right, proves that this ambiguity went deeper than the mere results of coalition politics – and, in doing so, provides a window onto the origins of the political forces that have increasingly displaced the New Right following the 2016 US presidential election.

A study of the connections between Cold War era US conservatives and anti-communist paramilitaries abroad, Revolutionaries for the Right explores what Burke calls the ‘anticommunist international’ (2) an ‘imagined community’ (3) of right-wing, non- and quasi-governmental entities seeking to roll back communism from Eastern Europe to the Global South. Far from being a wholly American project, Burke argues that this international played a significant role in shaping elements of the emerging US conservative movement, and, eventually, influenced the Reagan administration’s embrace of anti-communist insurgency in the 1980s.

Chapter 1 explores the emergence of the anticommunist international during the 1950s thanks to efforts by Chiang Kai-Shek’s exiled Guomindang Party to find international support for launching an insurgency against Mao’s communists on the Chinese mainland. Drawing together disparate groups – from the Guomindang-backed Asian People’s Anti-Communist League to the pro-fascist, Eastern European, Anti-Bolshevik Bloc of Nations – the Chinese nationalists and their allies attempted to build a unified front against communism, establishing the ‘World Anti-Communist Congress for Freedom and Liberation’ in 1957. Little, however, tied the member groups together and thus the Congress barely lasted a year – the American ‘Committee of One Million’, in particular, was uncomfortable with the anti-Semitism of groups like the Bloc and withdrew after only a few months.

Burke’s subsequent two chapters show that despite this initial failure, interest in organising persisted and indeed accelerated in the 1960s and ‘70s. Key to the groups that emerged in this period, such as the World Anti-Communist League, was the growing belief that the United States was failing to use its power to sufficiently advance the anticommunist cause. The Eisenhower administration’s unwillingness to follow through on its rhetoric about rolling back communism by supporting the 1956 Hungarian Revolution, and the swift decline in the popularity of the US war effort in Vietnam a decade later, all suggested to those on the far right that the United States was too weak to be counted on. The solution appeared to be privately financed counterrevolution, with private donors providing the financial and material support to bolster anticommunist fighters in places like Rhodesia and Angola, replacing aid from the US. Individuals, meanwhile, might volunteer to serve as mercenaries, bringing the fight to the communists directly themselves.

The collapse of South Vietnam, and subsequent revelations about the Cold War misdeeds of US intelligence agencies, forced the departure from government of numerous experienced covert operatives in the mid-1970s, only swelling the ranks of those with a desire to fight communism and no state organised means to do so. The focus of Chapter 4, these former soldiers and spies took matters into their own hands, building advocacy groups, private security companies, and even establishing popular magazines like ‘Soldier of Fortune’ to advance the paramilitary anticommunist cause. The state couldn’t be trusted to do the necessary work, they argued, only private individuals with a will and a gun could be counted on to roll back the red tide. By the late 1970s, this pro-paramilitary right had firmly established itself in the American conservative firmament, rubbing shoulders with many of usual New Right suspects, like William F. Buckley, Howard Phillips, Paul Weyrich, and Pat Robertson.

Ideas about the value of paramilitary, anti-communist insurgency generated in these circles, deeply influenced the Reagan Administration’s ‘Reagan Doctrine’ in Latin America – Reagan told retired General John Singlaub, a key figure in Burke’s story, that his work provided ‘more material for my speeches than anyone else’. (120) The focus of the book’s final two chapters, these networks also provided private financial support for insurgents and paramilitaries in places like Nicaragua and El Salvador. Some Americans even found their way to the front lines, especially under the auspices of Soldier of Fortune, which sent teams to train and support insurgents and then monetize that experience through reporting for the magazine (the use of the Soldier of Fortune material is particularly inventive and a strength of the book). The collapse of the Soviet Union and most of the world’s communist regimes in the late 1980s and early ‘90s swiftly made the anticommunist international obsolete. Yet, Burke argues in his conclusion, its influence proved enduring both in the rise of private security firms and in the American militia movement. That the latter – with its odd mix of extreme patriotism and deep distrust of the US government and intelligence community – marched its way into history on January 6th 2021, only further illustrates the importance of the history Burke uncovers here.

Working from admirably broad archival research in several countries, Burke joins the growing number of scholars who argue that the rise of the American New Right cannot be understood without reference to US foreign policy, and especially US foreign policy in the Global South. [i] He also details the numerous ideological fissures on the global right – particularly between US conservatives, classical liberals for the most part, and the church, state, and landowner conservatism elsewhere in the world – providing an important corrective to simplistic narratives about a coherent ‘conservatism’ stalking the globe since 1789. Ably jumping from stories of international arms dealers, to anticommunist guerilla encampments and activists in Dallas convention halls, the book’s only ‘fault’ is that at times it leaves the reader wishing for more on the many fascinating strands Burke weaves together.

Sean T. Byrnes is a Senior Instructor in World History at Western Governors University and an Adjunct Associate Professor of History at the University of Maryland Global Campus. He earned his Ph.D in history from Emory University and is the author of Disunited Nations: US Foreign Policy, Anti-Americanism and the New Right (Louisiana State University Press, 2021).
View all posts by Sean Byrnes →
Tagged  20th century history, Anti-Communism, Book Review.
Bookmark the permalink.