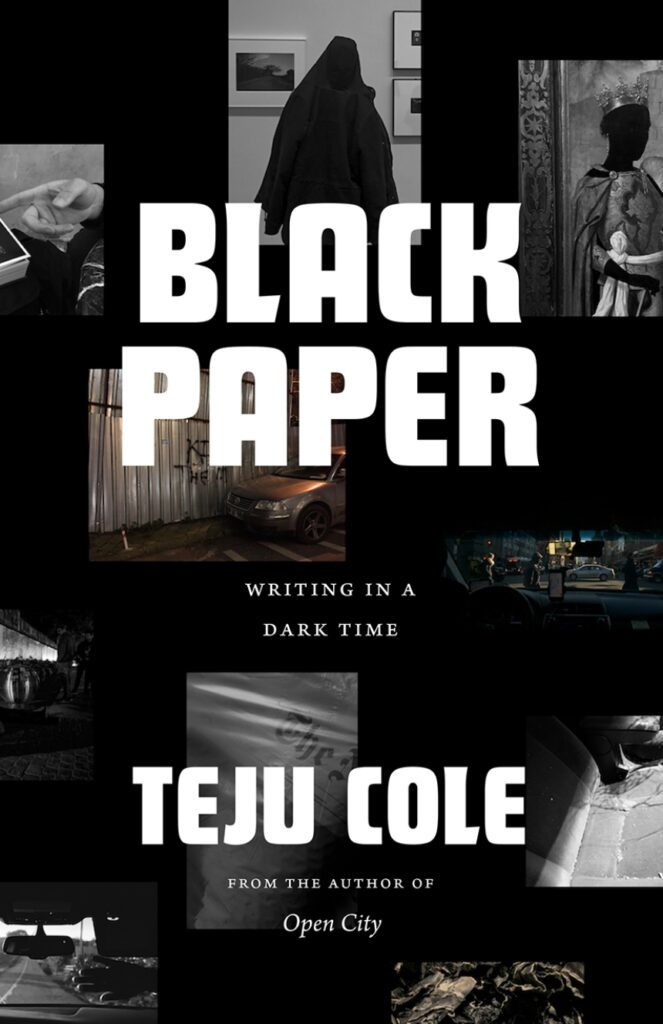 The breadth of Teju Cole’s oeuvre – novelist, essayist, photography critic, and photographer – has led many to describe him as a public intellectual. It’s a label Cole has expressed his discomfort with[1], in spite of his knack for presenting innovative work through social media, amongst them his Twitter short story Hafiz, and his consistently oblique photographs that knowingly jar with the dominant aesthetic on Instagram. The publication in 2010 of his second novel, Open City, saw him heralded as a major new writer, despite his novel being subtle, ambiguous and, on the surface, largely plotless. He followed Open City with the wider publication of his debut novel, Every Day is For the Thief, previously only published in Nigeria. He has since gone on to publish a collection of essays, Known and Strange Things, and three photobooks: Blind Spot, Fernweh and Golden Apple of the Sun. Black Paper is his second collection of essays.

If the role of a public intellectual is to bring the fruits of esoteric learning to a wider audience, then Black Paper further confirms Cole as one. The opening essay, ‘After Caravaggio,’ establishes a context of approachable academia as Cole, an art historian by training, links a tour he undertakes of Caravaggio’s painting in Italy and Malta to the ongoing humanitarian crisis in the region (a context he reinforces throughout the collection). Caravaggio’s colourful and controversial career can be mapped onto the major flashpoints of the crisis – ports in the Mediterranean. His words give the reader a greater understanding of Caravaggio, and an appreciation of him as an artist in the vein of Samuel Beckett and Toni Morrison who, Cole believes, force us to confront the world’s horrors.

Black Paper is centred around the Berlin Family Lectures – a series of three Cole delivered at the University of Chicago that deal with the senses through the lenses of Epiphany, Experience, and Ethics. Collectively, these form a strong core to the collection but are still best enjoyed on YouTube, as they lose some of their sensory power without the accompanying visuals and Cole’s sedulous delivery. They are tonally representative of the collection, which, given that it collects Cole’s work during the most divisive and ugly American presidency in living memory, is shot through with a deep sense of crisis. In ‘Ethics’, Cole illustrates how this sense has a physical manifestation:

People we have made to suffer extremely are reminders of something of which we don’t want to be reminded: that we can suffer extremely too. Our security is threatened not because there is something they will do to us, some kind of attack, but rather because of what we are: beings as vulnerable and insecure as they are. This is knowledge that must be suppressed at all costs, knowledge that is therefore met with disgust. The abject is disgusting because it comes from us, because it is our unstable selves externalized, the intimate fact we cannot bear to smell. (201)

Aside from the sense of crisis, Black Paper is suffused with loss, and a section is devoted to elegies – paying tribute to both friends and heroes of Cole’s. Edward Saïd, Aretha Franklin, and John Berger will need no introduction to many of Cole’s readers and he uses the figures of Saïd and Berger (his friend) to shed light on his own process and the overarching themes of his work. But no familiarity is needed with the subjects to appreciate Cole’s tender admiration, as in ‘Two Elegies,’ where he pays tribute to Bisi Silva and Okwui Enwezor, Nigerian art critics and curators who died in 2019:

How many of us loved them both. Our captains. Equal to each other. Unrivaled among the rest. They were proud of us? We were much prouder of them. (51)

Death, specifically the incommensurability of death, has long been a theme of Cole’s work, but is given its finest expression yet throughout Black Paper – an elegant reminder that continued attention to the life’s work of the dead and their lasting echoes is the finest way to honour them. In ‘Passages North’, another highlight, Cole visits Oslo and surveys the emotional landscape of a city permanently scarred by the Utøya Island massacre, sensing a melancholy that runs counter to a survey’s declaration that Norway is the happiest country on earth:

I find myself more convinced by the idea that we navigate our lives individually, whatever the country, and that those complexities and pains cannot be accounted for by polls. Sorrow is not an economic metric. (232)

The final essay, ‘Black Paper,’ provides a stunning epilogue. A collection of fragments, seemingly disconnected, build in affect and circle back to each other to gradually cohere into a deeply moving précis of the collection and its themes of loss, uncertainty, sensory knowledge, and defiance. The lingering tone of this collection is enigmatic but consolatory; a book for our troubling times. Black Paper reinforces the idea of Cole as a public intellectual, but one who works on his own terms.

[1] In an interview in 2017, Cole said “I always find it weird that Americans think of me as a political novelist or public intellectual because I’m not, I’m just trying to be responsible to the megaphone that I have. It would be weird not to.” Hodapp, James M. “Lumpy Sympathies: An Interview in Beirut with Teju Cole.” Research in African Literatures, vol. 48, no. 4, winter 2017, pp. 243+; Nevertheless, the designation has gained prominence, as seen earlier this year in the publication of Maria Lauret’s article “Teju Cole: Public Intellectual,” where she considers the tradition as a mode of artistic activism. (Maria Lauret (2021): “Teju Cole: Public intellectual,” Atlantic Studies, DOI: 10.1080/14788810.2020.1847543)

Andrew Clarke is a 2nd year PhD candidate in Maynooth University and an Irish Research Council Government of Ireland Scholar. He holds degrees from Trinity College Dublin and Dublin City University. His dissertation is entitled '"Describe the problem properly": Hybridity and Ambiguity in the work of Teju Cole.'
View all posts by Andrew Clarke →
Tagged  Book Review.
Bookmark the permalink.