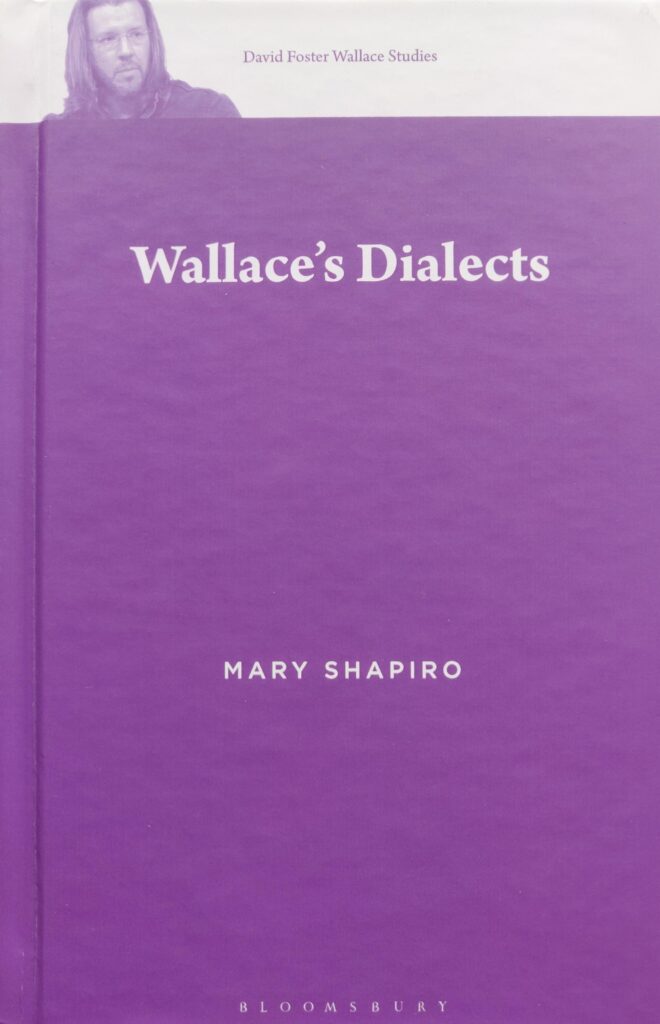 Mary Shapiro makes the case for Wallace’s Dialects clearly on the first page: Wallace’s ‘inventive and poetic uses of language have been frequently praised, but little studied from a linguistic point of view’ (1). Shapiro’s book is a welcome addition to the field of Wallace Studies. Positioned as it is, Wallace’s Dialects has two clear distinctions as a monograph. First, this book focuses very notably on Wallace’s texts (both fiction and not) at the micro level, at the level of sentence. Particular word choices, even letter choices, are scrutinised across Wallace’s oeuvre. This is distinct from other monographs that more readily examine the structure of Wallace’s writing at the macro level.[i] Second, and relatedly, this tight focus at the level of sentence means that Wallace’s Dialects operates at the juncture of textual analysis and biography – a way of mediating between the effects of the writing and the conditions of that writing’s composition. This monograph closely reads the language to make conclusions about both texts and author.

The book is split into ten chapters, the middle eight of which centre around different dialects, accents, and linguistic patterns that feature across Wallace’s writing. These chapters include close readings of the representation of foreign (i.e., non-US) characters, African American and Black characters, and midwestern, Texan, and Boston characters. Shapiro succinctly shows how ‘at each level (nationality, ethnicity, regionality), Wallace distinguishes the “not-me” from “me,” instantiating the distinctions in language used by different characters’ (4). The central focus in Wallace’s Dialects is on those characters who are in the ‘not-me’ category, and explores how national, ethnic, and regional identities are constructed through the representations of characters’ voices in Wallace’s texts. These distinctions are logical and justifiable because this is how they are represented by Wallace’s writing: as far as the language is concerned, there are no complex or intersectional identities but rather a single ‘characteristic’ that is identifiable by the way a character speaks. This is most clearly evidenced in Shapiro’s astute claim that ‘there is an inverse relationship in Wallace’s work between ethnicity and regional identity: only white people are perceived as regional; anyone with a regional identity must be white’ (81).

Shapiro is committed to the idea that ‘Wallace put nonstandard language into the mouths of characters not to evoke negative stereotypes of any particular group, but to confront readers with a particular view of how language functions in US society to reflect and reinforce social divisions, and to demonstrate how characters express their identities both in affiliation with and in resistance to other recognized identities’ (15). The overarching argument of Shapiro’s book is that Wallace’s texts, despite – or perhaps, in part, due to – their shortcomings, show a writer attempting to find moments of connection. Such an observation is most fully realised in the book’s crucial ninth chapter, where Shapiro reads the ubiquitous, cross-bibliography ‘Dave Wallace’ narration as central to how Wallace’s writing allows readers to be ‘challenged to bear witness to all kinds of horror and indignities; the pain of this is made bearable by identifying with the always deeply ethical perspective of the narrator’ (199-200). This chapter works well to thread together the multiple identity groups analysed in the previous sections. However, Shapiro’s limited analysis of The Pale King is noticeable here (it is only really mentioned in passing), especially considering it is the novel in which Wallace explicitly plays with his own narrative voice. David Hering’s David Foster Wallace: Fiction and Form (2016), with its groundbreaking chapter on the long and complex development of Wallace’s final unfinished novel, would be the perfect critical accompaniment for Shapiro’s analysis here.[ii] Hering organises huge amounts of archive material, held at the Harry Ransom Center at the University of Texas at Austin, to analyse The Pale King’s form. Surely Shapiro could have built on Hering’s work to further a linguistics reading of the novel, at once addressing an analytical gap in the field and producing a reading that furthers the important scholarship she has begun here? It feels like a missed opportunity.

This is not the only time that Wallace’s Dialects finds itself in a predicament due to its engagement with other critical work on Wallace. It is impossible to miss the book’s continuous disagreement with other Wallace scholars. Lucas Thompson and, to a lesser extent, Clare-Hayes-Brady are repeatedly argued against throughout, particularly with regard to how they read Wallace’s representations of race as problematic (51). Disagreement is, of course, part of the job here, but there are many passages where Shapiro’s explicit dismissal of other work neither propels her own argument forward, nor positions it more clearly (see, for example, 64, 75, 82, 88). I think this is more of a stylistic issue rather than reading in bad faith, and seems to stem from a genuine attempt to make clear the parameters and value of a linguistics reading of Wallace among existing scholarship. Wallace’s Dialects is, through the angle of its enquiry, already an important contribution; perhaps a slightly softer touch is needed from here on out.

Carl White is a postgraduate researcher at the University of Leeds. His work examines contemporary American fiction and financialization. His writing has been published in Textual Practice and Humanities, and he recently co-edited the WRoCAH Journal.
View all posts by Carl White →
Tagged  American Literature, Book Review, David Foster Wallace.
Bookmark the permalink.