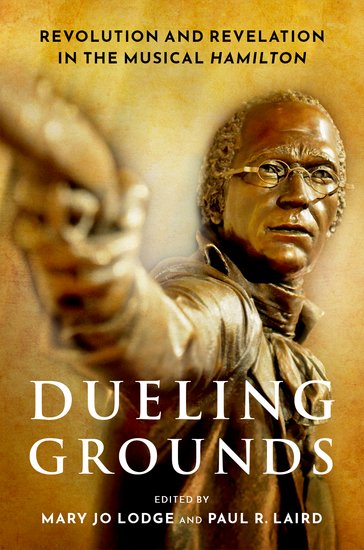 Featuring important contributions from scholars and professionals of theatre and performance as well as specialists in musicology, history, and economics, Dueling Grounds: Revolution and Revelation in the Musical Hamilton provides a vast variety of disciplinary perspectives on Hamilton and its wide-ranging deployments of liminality. The show itself has garnered a great deal of acclaim for promoting diversity and inspiring historical education, praise certainly not without warrant. However, the editors and contributors of this topical volume do not shy away from the fact that Hamilton leaves some aspects of eighteenth-century American life either obscured or unaddressed, particularly with regard to issues involving people of colour and women. Through examinations of the show’s synthesis, casting choices, marketing, music and lyrics, directing, and staging and costuming, in addition to the more performative elements of choreography and movement, Dueling Grounds offers a multi-faceted approach to thinking about Hamilton and its relationships with race, gender, and class.

Since its Off-Broadway premiere in 2015, Hamilton has achieved international acclaim. Lin-Manuel Miranda, creator and star of the award-winning show, found a unique lens through which to examine both contemporary issues in the United States and the ways that Americans interpret their nation’s history: Alexander Hamilton and the social, cultural, political, and personal issues he confronted in Revolutionary America. Indeed, alongside a surge of contemporary movements lobbying for race and gender equality, Hamilton teases out parallels and contrasts between American life then and now, exploring historical memory and popularly whitewashed Founding legacies. With a cast of performers of colour playing white Founders and a score grounded in rap and hip-hop classics, including nods to both the lyrics and flow of the Notorious B.I.G., Hamilton offers a compelling commentary on past and present race relations in America. Yet, from a historical standpoint, the show deviates from the facts of the events at times and leaves quite a few questions unanswered. Dueling Grounds, however, helps to fill in those blanks by exploring the show’s beginnings synthesis and its life beyond Broadway. The collection of essays utilises struggle as a framework for analysis of the show’s cultural position and content.

Divided into four core sections, each chapter efficiently and effectively provides its own distinctive form of connective tissue between the liminality of Hamilton and the boundaries of space, time, and function. ‘Hamilton and History’ explores the show’s liminality by assessing how early American history has been depicted on the Broadway stage, analysing the delicate balance of early American economics and examining the ways in which Hamilton offers a fresh take on traditional musical theatre. ‘Hamilton and Representation’ confronts the more problematic aspects of Hamilton, drawing specific attention to creative choices that effectively whitewash the complicated narrative of the Revolutionary era. For instance, various contributors note that while the show certainly crosses the boundaries of race, gender, and period in its casting, Hamilton fails to explicitly address the complicity of America’s beloved, racially homogenous cohort of founding fathers in the abuse and oppression of people of colour. Additionally, this section explores the stereotypical roles afforded to the women of Hamilton, in stark contrast to its complicated portrayal of men. Continuing to weave the fabric of liminality, the ‘Staging Hamilton’ section features three essays that interpret various personnel, ensemble, performative, and design elements of the production. In the final section of the volume, ‘Singing Hamilton’, contributors discuss the duality of the production, as both traditional and ground-breaking, and as distinctly American, but simultaneously transatlantic. Overall, these core sections combine to comprehensively explore the production as a whole and to assess Hamilton as a liminal space.

The success of Hamilton has certainly impacted the publishing world, with new releases including a memoir from Giles Terera, who played Aaron Burr in the London production of the show, and an edited collection from historians Renee C. Romano and Claire Bond Potter which examines the phenomenon of Hamilton and the ways in which the musical reframed popular conceptions of the founding generation.[i] Through a vast variety of perspectives and expertise, however, Dueling Grounds makes a highly original and decidedly valuable contribution to the scholarship on Hamilton. Dueling Grounds offers a multi-faceted analysis of a similarly diverse production, which brings together many distinct and differing notions of music, staging practices, identity, history, and materiality. With contributions from such a wide range of experts, this volume offers a wide variety of disciplinary perspectives which combine to demonstrate the extent to which Hamilton can and should be viewed as a liminal space. Each chapter is as thorough and valuable as the next, and taken as a whole, this volume has a great deal to say about the context from which Hamilton was developed, the commentary it offers on contemporary life in the United States, and the ways in which the production communicates its narrative. Although Dueling Grounds may not fit neatly into any singular research specialty, the critical insights provided by its contributors will undoubtedly enrich any reader’s understandings and explorations of Hamilton.

[i] For further reading on the phenomenon of Hamilton, please see Hamilton and Me: An Actor’s Journal (Nick Hern Books, 2021) and Historians on Hamilton: How a Blockbuster Musical is Restaging America’s Past, Edited by Renee C. Romano and Claire Bond Potter (Rutgers University Press, 2018).

Megan King is a doctoral candidate at the University of Kent. Her academic background includes programs in language and linguistics, terrorism analysis, and historical research. Her current research project at the University of Kent centers on the mechanisms of nonviolent action utilized by patriot organizations in the decade preceding the Revolutionary War. She also serves as the publicity editor for the Pubs and Publications blog
View all posts by Megan King →
Tagged  Book Review, hamilton, Musical History.
Bookmark the permalink.