Sampson Selig: the 1896 election and children in American political history

Children remain disenfranchised. They are formally divorced from political participation and are unable to directly influence who is elected to their local board of supervisors, never mind who enters the White House. But American political history is incomplete without considering the nation’s youngsters. Firstly, children wield immense soft political power due to common adult perceptions of childhood innocence and vulnerability. In most elections, the question of what type of America should be inherited by the next generation is prominent. Adult campaigners frequently lean on ideas of childhood to support their cause. But children seek to intervene in political discourse too. They have proven themselves capable of influencing local and national politics including as speechmakers. 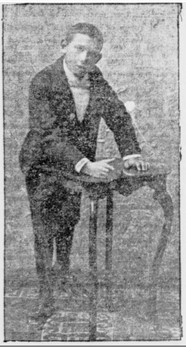 Thirteen-year-old Brayden Harrington’s contribution to the 2020 Democratic Convention may have seemed unusual but the use of a child orator is nothing new. The Biden campaign facilitated his speaking as it was of political benefit, but Harrington’s character endorsement was sincere – he fulfilled his own objectives. He is one of several American children to have entered the lofty fray of Presidential politics. During the 1932 election, ten-year-old New Jerseyan Marion Wells gave no fewer than 23 speeches in support of Franklin D. Roosevelt across the Garden State and was even described as the state party’s “hottest asset.” Wells clearly knew her politics; she predicted Roosevelt’s winning 42 states during one speech she delivered whilst teetering on a chair. As an adult she went on to hold local offices in Ocean County for fifteen years.[i]

During the 1896 Presidential election Republicans across the Northeast came to adore eleven-year-old Sampson Selig, best known for his disdainful verbal attacks on the Democratic nominee William Jennings Bryan. Born in Atlanta before relocating to Troy, New York, he was nicknamed “the boy orator of the Hudson.” His confidence came from a career as a child theatre performer, a highlight of which entailed giving a dramatic recital to a crowd of 5,000 in Brooklyn as a nine-year-old.[ii] As the election approached, Selig focussed his stage prowess into politics.  Standing at just over four feet tall and weighing in at around 65 lbs Sampson, or Sammy to close friends, cut a minuscule figure with a childish treble voice to match. He invoked patriotism to defend his youthful participation in typically adult affairs, stating “I am a child of this Great Republic and feel that I cannot begin too early to take up the cause.” His big break came when he addressed a local Republican club where the audience included future Ohio Senator and then Republican National Committee Chair Mark Hanna. The press speculated that Hanna was so impressed by the young elocutionist that he paid him the princely sum of $50 a week to take part in the campaign. This was never confirmed. Perhaps more interestingly it was never denied. The savvy Selig merely told reporters in New York that Hanna had informed him “My services are required here and elsewhere.” A sign that he had at least some disposable income was his donating two dollars to the New York Herald Tribune’s relief fund for his impoverished favourite author Mark Twain.[iii] The fact that he conducted impromptu interviews shows that he was capable of holding his own in conversation with adults rather than just delivering scripted remarks.

Selig ended up stumping for the McKinley campaign in Connecticut, Massachusetts, New York, Pennsylvania and Ohio, winning considerable praise for his performances. Appropriating the formality and trappings of an adult politician, the boy insisted on being introduced as “the Hon. Master Sampson Selig.” His two regular slogans were a shout to “Open the mills and not the mint!” and a twisted version of Bryan’s Chicago Convention speech, “They shall not crush down the crown of silver thorns on the corns of labor!” Aware of the campaign issues, he praised the patriotism of McKinley’s protectionist economic policy and lambasted Bryan’s free trade and bimetallism plan which advocated abandoning a pure gold standard and supplementing the economy with silver. How much of this was Selig’s own opinion and how much influence adults had on his speeches is unclear. Irrespective of this he was an accomplished political speaker and adult influence does not delegitimise his contributions. Adult politicians receive information and guidance from advisers all the time and there is no reason to hold Selig or young people like him to a different standard.

At an event on Union Street in New York City Selig apparently “astonished old campaigners” with a compelling speaking performance that relegated sitting New York Congressman Lemuel E. Quigg to the role of “second fiddle.” The Boston Globe reported that he had left an audience there “spellbound” and was sure to win “a good many votes for Maj. McKinley.” News of his performances even crossed the Atlantic. Readers of Yorkshire’s Sheffield and Rotherham Independent were told of the “curiosity” of a “boy orator” taking to the campaign trail and were informed that although only a “little chap” Selig was capable of exciting crowds so much they “shouted themselves hoarse.”[iv] Given his prominence on the campaign trail, interest in Selig was high and in the lobby of his Union Square hotel he was approached for interview by a New York World journalist. “I’ll have to check with my mamma first” the boy insisted, trotting off before returning quickly with her alongside. After defending his own right to participate in political discourse as a “child of the Republic,” Selig was keen to focus the interview on attacking Democrats. He insinuated that Bryan was a liar, opining “I don’t think very much of him at all…he says a lot of things but never stops to prove them.” Selig backed himself to “skin” Bryan in a debate and told the journalist that he would love to meet him in “combat” if the weapons were “brains and tongues.”[v]

A fifteen-year-old Selig spoke publicly again as the 1900 election approached. His adolescent attitude and harsh insults made a colourful addition to local Republican campaign events. On the subject of imperialism he remarked, “Democrats who are ranting about imperialism should consider that they have the ABC of imperialism in their own party – Aguinaldo, Bryan, and Croker.” Attacking Bryan’s honesty again Selig said, “Bryan prides himself on his principle. He was a poor man four years ago. Apparently, his principle has drawn good interest.” On the subject of the Democratic “Trust Plank”, Selig suggested it was so nonsensical it may as well be “For a hot time in November; in ice we trust.”

In 1896 and 1900 Sampson Selig backed the winner. He remained a regular speaker at Republican clubs for a few years speaking in support of McKinley and then Theodore Roosevelt. But his political career would ultimately be confined to his childhood as he ultimately pursued a successful career in civil law. His childhood political career, whilst not pivotal in the outcome of either election, demonstrates that children have long been capable political participants. Although unable to vote they have taken prominent roles in elections and lent their voices to political discourse. American political history is only complete when the history of the children both as evocative figures and as actors in their own right is considered.

Jack Hodgson completed his PhD at the University of Northumbria in October 2021. He is a historian of children and childhood in the United States in the late 19th and early 20th century. His work pays particular attention to child citizenship, children’s constitutional rights, and children’s political participation. You can find him on Twitter: https://twitter.com/hodgepodge96
View all posts by Jack Hodgson →
Tagged  Children, Political History, Research.
Bookmark the permalink.