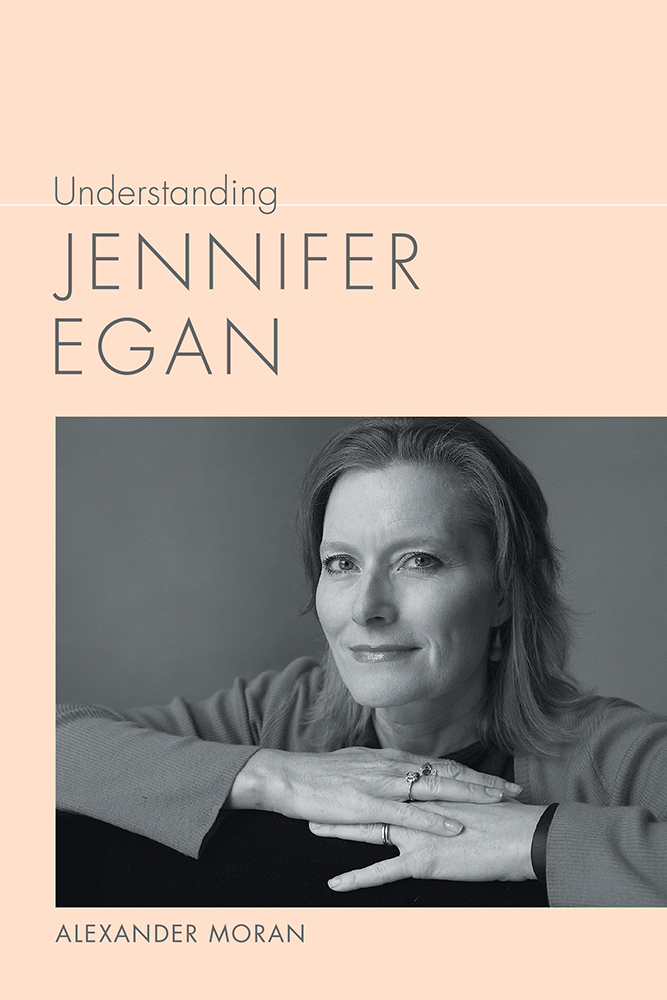 Understanding Jennifer Egan by Alexander Moran is the first book-length study to provide critical analysis of all of Jennifer Egan’s published fiction to date. Arriving in the same year as Ivan Krielkamp’s A Visit from the Goon Squad REREAD,[i] the rising critical attention to Egan’s work is a welcome sight, correcting the tendency to overlook Egan’s constant and significant presence in contemporary fiction.

Moran takes a chronological approach to Egan’s work, centring each chapter on one of her books in order of publication. While noting the individual interests of each text, he ties his analysis together nicely with a constant focus upon authenticity, arguing that each of Egan’s books are in their own way about the search for an authentic experience. In Emerald City, The Invisible Circus, and Manhattan Beach, authenticity is interrogated within tourism and historical memory — while in Look at Me, The Keep, and A Visit from the Goon Squad, digitisation and surveillance capitalism are the central players in staging authentic experiences. This common thread allows Moran to navigate the many genres and settings of Egan’s books while making links across her body of work: noting recurring interests such as tourism and terrorism, and her tendency to leave historical events off-page and to focus on the aftermath or time immediately preceding such events.

Understanding Jennifer Egan is an exceptionally useful tool for any researcher wishing to understand Egan’s significance in contemporary American fiction, detailing her consistent attention to current events and changing global trends and power structures. Offering concise yet detailed accounts of each novel, Moran also situates Egan in a literary context. He makes connections to other contemporary authors by noting shared interests, such as the recurring trope of the female terrorist,[ii] and by discussing authors who sometimes dominated critical attention at Egan’s expense (as with Look at Me losing the 2001 National Book Award to Franzen’s The Corrections). Moran also highlights Egan’s non-fiction writing and her journalism, outlining how these contributed to her fiction, such as her 1996 article ‘James is a Girl’ leading to Look at Me, and her journalistic research experience aiding her process when writing historical novel Manhattan Beach.

This attention to Egan’s many interests, influences, and outputs allows Moran to explore why Egan’s work is difficult to define or categorise, noting her many references ranging from Proust to The Sopranos within her more experimental and her historical fiction alike. Through offering authenticity as a framework for critical analysis, Moran both appreciates the complexity in which Egan plays with genre and form while suggesting that we do not need to rely upon such categorisation in order to understand Egan’s writing. The emphasis placed upon the lived experience of authenticity adds further dimension to this critical framework: zeroing in on the impact upon the individual as the passage of time, capitalism, and technology destabilise characters’ perceptions of self and others.

Including ‘Black Box’, Egan’s 2012 Twitter fiction, within his analysis of 2010 novel A Visit from the Goon Squad enables Moran to amplify the ways in which ‘Black Box’ is a continuation of the novel, taking the character Lulu into a new genre and setting. Yet, in some ways this framing of the texts is limiting, painting analysis of Goon Squad as incomplete without the addition of ‘Black Box’ (and vice-versa). For example, in his table (81-84) which very helpfully reorders each chapter of Goon Squad into chronological order, Moran notes that two chapters are written in the second person. However, this includes ‘Black Box’; in Goon Squad in fact only one chapter is second person. The significance of this unique chapter is missed through this combined approach to the two publications.

I was hoping for a mention of Egan’s upcoming novel The Candy House, to be published in April 2022, but Moran’s book ends with Manhattan Beach and the assessment that ‘recent fiction cannot stop thinking historically’ (111). Though The Candy House was not confirmed until very recently, likely after Moran’s book was finalised, Egan has spoken of her plans to further expand the world of Goon Squad multiple times over the past few years. However, given that 2021 has seen the first two critical books published about Egan, I have high hopes for further scholarship including her future novels.

Ultimately, as a PhD researcher myself focused on Jennifer Egan’s fiction, I was delighted to read and review Moran’s perceptive and cogent analysis of the ongoing concerns shared across Egan’s novels and short stories, and only wish his book had been published sooner so I might have had this aid when I began my own research.