Book Review: The Victims of Democracy: Malcolm X and the Black Revolution by Eugene Victor Wolfenstein 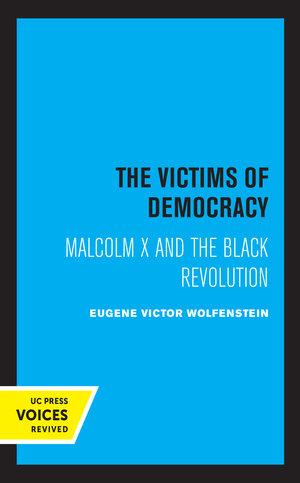 The Victims of Democracy: Malcolm X and the Black Revolution (2021) is a new rendition of Eugene Victor Wolfenstein’s 1981 The Victims of Democracy. It constitutes a biographical study of Malcolm X’s life, heavily drawing from the model that Alex Haley utilised in his 1965 The Autobiography of Malcolm X. Wolfenstein is in conversation with the fields of psychoanalysis, Marxism and critical race theory. He draws on Malcolm X’s published speeches and a number of different historical materials to support his main arguments. He examines the diverse political, psychological, and economic factors that shaped Malcolm’s life as a black man and ultimately led to him leading the Black liberation movement. The book consists of five chapters, each of which examines a major era in Malcolm X’s life.

The significance of The Victims of Democracy lies in the employment of the figure of Malcolm X as a metaphor through which politics, history and economics are tackled. The most important aspect of Wolfenstein’s approach is that he unpacks what it means to be a black body in a primarily white society in which race relations are rendered with hatred. Of course, he recognises the limitation that his approach entails: he clarifies that, as a white, heterosexual male, his standing differs from Malcolm X’s. He attempts to incorporate his main interest, the way in which one’s personality and politics interact in his analysis of Malcolm X as a political figure. The origin of Wolfenstein’s inquiry is based on his research in regards to the relationships between the categories of personality and politics, as he perceives the two as inextricably linked.

What is intriguing in The Victims of Democracy is that Wolfenstein explores the ways in which Malcolm X’s consciousness changes throughout different stages of his life: through his youth; through his positioning as a hustler; during the time of his imprisonment; and ultimately during his revolution, conversion to black nationalism and Islam and his formation of the Organization of Afro-American Unity. These events are examined in relation to race-theory and are analysed through the employment of psychoanalytical terms: oedipal fixation, projection, and false consciousness. The main question that Wolfenstein poses is how Malcolm X’s  consciousness became false. The limitation of his approach is that he attempts to address the whole Black revolutionary movement mainly by drawing on Malcolm X’s autobiography. He argues, for example, that Malcolm X’s imprisonment was the stepping stone which made him question existing theories and formulate his own rationale which prompted him to turn to collective action. Wolfenstein places therefore major emphasis on the connection between white racism and false consciousness in relation to black racial self-identification: ‘The sensuous interaction of energetic individuals constitutes a potential for self-conscious activity, a potential which is actualized through objectifying […] and subjectifying […] processes.’ (347)

Wolfenstein takes up the work of Wilhelm Reich, Erich Fromm, Franz Fanon and Jean Paul Sartre but primarily the work of Marx and Freud in order to examine the relationship between Malcolm X and the black revolution. He adopts a version of Max Weber’s methodology, which forces us to consider the relationship between political consciousness and social context, and also borrows theoretical notions from Erik Erikson, who extended the psycho-genetic dimension of Freud’s theory in a conception of the human life cycle. Wolfenstein developed the idea of adult identity crisis, perhaps accompanied by socially expected activities from which the individual emerges with a culturally significant vocation and self-definition. Wolfenstein’s psycho-political inquiry created an artificial subject matter which precluded the understanding of the real one.

All in all, The Victims of Democracy sheds light on Malcolm X’s leadership among the African-American community. The Black Revolution was a movement through which the contradictions among racial militancy and political radicalism were brought to the forefront. Malcolm X exposed actual revolutionary activity through individual and collective instances. Malcolm X’s experiences reflected the experiences of other black people; they were individual yet universal. Despite the awkward methodological approach at some parts of this study, The Victims of Democracy nonetheless represents an important resource for African American theorists and researchers.

Marietta Kosma is a first year DPhil student in English at the University of Oxford at Lady Margaret Hall. Her academic background includes a master in English from JSU and a master in Ancient Greek Theater from the university of the Aegean. Her research interests lie in twentieth-century American literature, postcolonialism and gender studies. Her research focuses on the construction of African American female identity in contemporary neo-slave narratives. She has participated in numerous conferences. She has written in a wide variety of journals, newspapers, magazines and in an edited book collection. She is an editor for the Right for Education Oxford and for the Oxford Student.
View all posts by Marietta Kosma →
Tagged  African American History, Book Review, Malcolm X.
Bookmark the permalink.