Climate change is no taboo topic as in recent years, figures and organisations such as Greta Thunberg and WWF have brought the on-going environmental crisis to the media’s forefront, presenting us with frankly terrifying statistics about our planet’s future if radical changes to our destructive behaviours are not made. Literature is a global entity which responds to culture and often reflects its most pressing issues. Thus, it has had no choice but to engage with the topic of climate change and has done so through a genre called climate fiction, also known as ‘cli-fi’.[i]

In such texts, the protagonists are often enlightened to climate change, while climate change deniers are represented as being ‘too blind’ – and often wilfully so – to see the truth. Such a focus on sight highlights the irony of the deniers’ stance in not seeing the bigger picture, as they often believe that they understand and see more than those who ‘blindly’ believe in and follow government rules and information. The irony becomes especially evident when considering how scientific research has shown that ‘primates, including humans, are highly visual creatures.’[ii] This suggests that we tend to rely on our sight to confirm any information being provided. For example, many have noticed that the weather has been more unpredictable and temperatures are dropping and rising to extremes unlike before, which scientists explain to be the result of global warming. Yet, an alarmingly large group of Americans continue to deny climate change or their responsibility in slowing it down as Jay Michaelson reports how a recent research report shows that ‘51 percent of Americans surveyed do not “believe” […] that human actions are causing Earth’s climate to warm.’[iii] 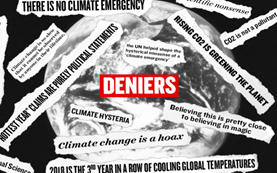 However, climate change deniers in the U.S are a complicated subject, as Edward L. Rubin has explained in his 2016 article, ‘Rejecting Climate Change: Not Science Denial, But Regulation Phobia.’ He argues that the denial movement is multi-faceted, consisting of religious beliefs such as ‘the idea that it is presumptuous for human beings to believe that they can change the natural order by their own actions,’ and ‘regulation phobia’ which operates on the rejection of ‘extensive regulatory intervention and […] extensive transformation of our economic and social structure.’[iv] It becomes clear that while people don’t necessarily reject the notion that climate change is happening, they see the efforts to slow it down as the government interfering with their personal lives, beliefs, and freedom. For example, many conservative Americans believe that the government is necessary for control but not to the extent where it will affect their freedom. They may notice the environmental changes but refuse to acknowledge their own role in it, seeking alternative explanations as a way to avoid confronting the truth. Since these perspectives are often backed up by political splits across party lines, climate change denial remains a difficult subject.

These problems relating to climate change deniers in the U.S, and the importance of sight and noticing, has been explored in a 2012 novel called Flight Behaviour by Barbara Kingsolver. In her novel, the main protagonist is a young American mother called Dellarobia who lives in relative poverty in the Appalachian mountains. She begins to notice certain elements of her surrounding natural environment and, through that noticing and paying heed, gains a renewed sense of appreciation for the natural world, a greater understanding of nature’s intrinsic value, and her responsibility in caring for it despite her own economic difficulties.

In the novel, monarch butterflies have migrated to a completely new location:  the trees in Dellarobia’s back garden, which are due to be logged for money to save her family. After the news spreads, scientists arrive and set up a laboratory in her garden to investigate the butterflies’ behaviour. It is then established that the migration is the result of climate  change and we learn that Dellarobia’s family is divided; she notices the butterflies, starts working alongside the scientists by observing them, and begins to believe that the butterflies and the forest need to be protected despite her family’s needs. Her father-in-law, however, owns the land and argues that those trees – and thus the butterflies – are ‘money in the bank and it’s my call’ and to him, they have no value on their own unless he decides they do. [v] 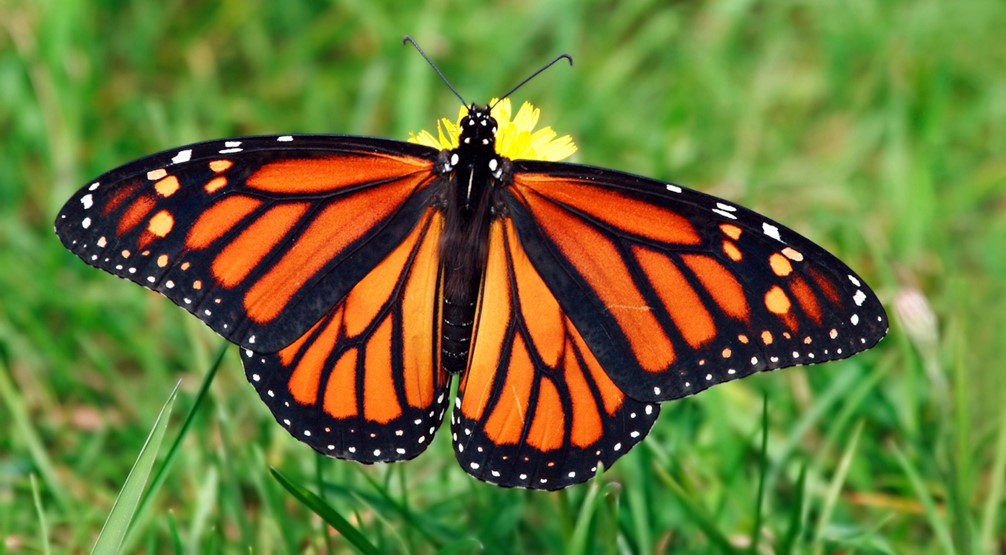 Dellarobia’s father-in-law’s refusal to acknowledge her concerns, and his lack of understanding of or care for nature’s intrinsic value, suggests the limitations women face in the climate change movement due to patriarchal masculinity that often prevents them from being taken seriously. For example, while her father-in-law’s ignorance conflicts with his family’s best interests, we can also recognise that his refusal to acknowledge environmental issues stems from his desperation to keep his family alive. However, Dellarobia is in exactly the same position, as a mother of two young children. Nevertheless, through her noticing and attention, she recognises that climate change concerns everyone and that even paying attention and accepting such issues is a positive step forward. This can be observed when she is interviewed for a news segment about the butterflies. She explains how she was ready to run away from her life when she saw the butterflies, saying, ‘I was so focused on my own little life. Just one person. And here was something so much bigger. I had to come back and live a different life.’[vi]

Flight Behaviour also exemplifies Rubin’s argument regarding regulation phobia as the novel portrays how the mother-in-law and the locals reject and mistrust the government and the scientists, believing they are interfering with their ways of life by studying and reporting about the butterflies. For example, when the scientist Dr. Byron initially sets up camp in Dellarobia’s garden, her mother-in-law Hester comes to visit and voices her concerns about it, saying ‘[he] looks foreign…Is he even Christian? He could be anything. And you in here with the children. Bear and I are a hundred percent on the fence about him being here.’[vii] When Dellarobia explains that Dr. Byron has been given a grant by the government and that he is paying rent to be there, Kingsolver portrays how she ‘watched Hester’s frown deepen. “He’s working for the government?”’[viii] This implies a sense of unease which was not present in Hester’s initial concerns about Dellarobia’s safety, which suggests her own regulation phobia about the government’s involvement in the situation. Dellarobia, however, sees beyond such concerns and understands that the scientists’ work is a positive thing for bringing awareness and attention to the situation and that the government funding Dr. Byron’s research means that the state is taking interest in conserving the butterflies.

If the climate denial movement in the U.S is to be addressed, and people’s often misinformed fears are to be dissolved, it is imperative to understand how complicated the situation is: climate change denial should be recognised to be the result of many factors, such as gender, class, and circumstances, which often go back generations and thus affect beliefs across families and communities. Cli-fi novels such as Flight Behaviour explore how strengthening a positive relationship between humans and nature can allow people to become more receptive to proposed regulations to combat climate change and mass consumerism, and bring about a change in the climate change denial movement.

[i] Charlene D’Avanzo, ‘Climate Fiction as Environmental Education’, Bulletin of the Ecological Society of Americam 99, no.4 (October 2018): 1.

[ii] Jon H. Kaas and Pooja Balaram, ‘Current research on the organization and function of the visual system in primates’, Eye Brain 6, no. 1 (September 2014): 1.

[iii] Jay Michaelson, ‘Extreme Weather? Blame the End Times: Half of Americans (and 77 percent of evangelicals) believe natural disasters are signs not of climate change but of the ‘End Times.’ How religious beliefs are fueling climate denial’, The Daily Beast, November 28, 2014.

Janette Kotter is a postgraduate student at Nottingham Trent University currently undertaking a Masters by Research in English Literary Studies, with a focus on climate change and environmental activism in contemporary British and American nature writing. She is also very interested in Estonian nature writing and its depictions of forestal ecosystems. She can be found on LinkedIn: https://www.linkedin.com/in/janette-kotter-b48956197
View all posts by Janette Kotter →
Tagged  Climate Change, Contemporary Fiction, Research.
Bookmark the permalink.