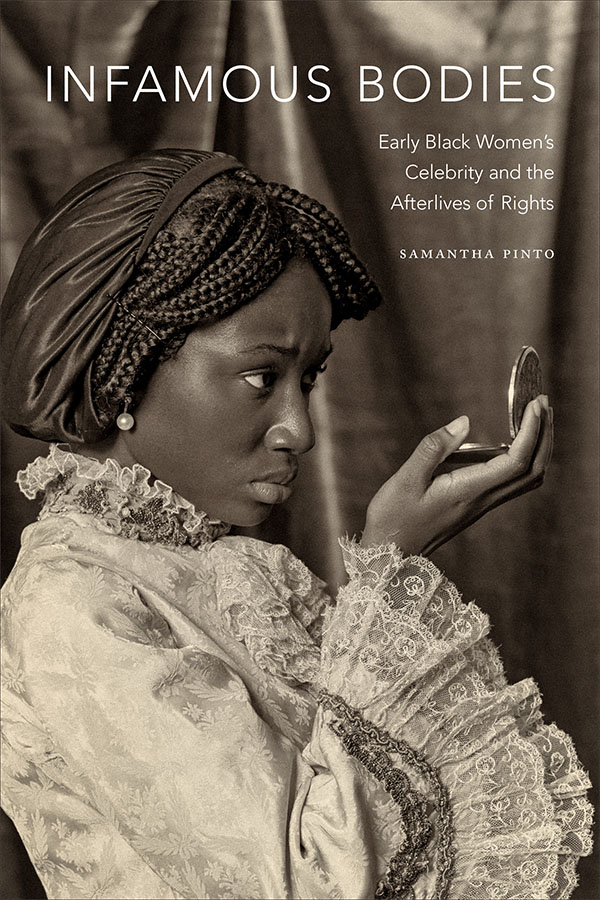 In Infamous Bodies: Early Black Women’s Celebrity and the Afterlives of Rights, Samantha Pinto thinks about the ways in which black women come into political view by interrogating the premises of the female celebrity genre. She carefully considers what it means to be a political figure and situates the discourse of vulnerability at the centre of politics. Infamous Bodies consists of five chapters, each of which deals with a celebrity of the eighteenth or nineteenth century. Pinto thinks through five case studies, the private and public lives of Phillis Wheatley, Sally Hemings, Sarah Baartman, Mary Seacole, and Sarah Forbes Bonetta, and the ways in which they reverberate across different political moments and are taken up again in the following centuries. Debates about these women centre on ‘the politics of representing exploited black women’s bodies and the attendant risk of repeating the injuries such exploitation caused and continues to manifest in the contemporary moment.’ (2)

Pinto considers these notorious figures of black female history for the way that they inform the limits of liberal humanist conceptions of freedom, agency, and consent. There have been many re-imaginings and retellings of Wheatley’s, Hemings’, Baartman’s, Seacole’s, and Bonetta’s lives. However, what is innovative in Pinto’s approach is that she renegotiates the ways that existing archives are treated. More specifically, she draws on Saidiya Hartman’s concept of ‘critical fabulations’, a writing methodology that combines historical and archival research with critical theory and fiction yet traces the need to read the archive differently (Hartman, 11). Pinto tries to explore the lives of these women beyond the archive and examines their standing in terms of the discourse of vulnerability. Pinto analyses a wide range of sources which encompass legal proceedings, visual arts, literature, autobiographies, biographies, literary criticism, and photographs. All this media constitute what is being called celebrity culture.

Core to Pinto’s Infamous Bodies are black feminism and celebrity studies which are engaged with the intersection of race, gender, and sexuality and the discourse of human rights. The book eschews the categories of the ‘heroic’ and the ‘tragic’ which have been traditionally assigned to Wheatley, Hemings, Baartman, Seacole, and Bonetta as adequate frames to ask how these figures ‘come to stand for too much’ and at the same time are erased political figures due to this excess of theirs (Crais and Scully, 6). Pinto employs the discourse of vulnerability to lead the reader to rethink the split between culture and politics, as every political system is embedded in a particular culture. Pinto tries to trace how African poet Phillis Wheatley, enslaved by Thomas Jefferson Sally Hemings, Victorian-era Jamaican nurse Mary Seacole, and African princess of the Egbado clan Sarah Forbes Bonetta were received in the 60s and 70s, pushing back against anti-black arts. Then she examines the reiteration of these figures in the 80s and the 90s in order to trace their re-imagination as both children and at the same time as women. These figures’ frailty within black studies becomes a significant moment of needing those markers to claim them as victims of white supremacy. Their frailty is not just a stripping of their innocence from black girls and black youth, it is also about the way that white childhood innocence is constructed through this dialectic and innocence as appended to childhood, particularly sexual innocence as appended to childhood. Queer and trans studies tie that juncture, and further extend towards a kind of de-sexualization of the child and waver towards the refusal of any kind of sexual agency in children. Pinto emphasizes this productive tension to look at the ways in which black studies can mobilize girlhood around innocence to contest these modes of turning girls into women.

Fueled by a powerful sense of urgency and engaging with the contemporary moment, Pinto exposes a deep understanding that black women’s art, and politics are means of expression that come out of vulnerability. According to Pinto, the coronavirus pandemic has been an intense time to think about black women’s vulnerability as the root of all political subjectivity. She is particularly interested in how one deals with vulnerability and how this relates to political discourse, the way that black girls’ images are used to be made into celebrities, and how this violation of their childhood is the basis of their infamy. This moment is in conversation with the increasing number of deaths of black bodies. This informs how one understands the cost and value of black women celebrity. Sexual dalliances or acts of violence that are intimate with capitalism, whiteness, and sexual engendered subjection as the central cases of political being and thinking are examined in Infamous Bodies.

In conclusion, through her work, Pinto prompts us to rethink the positioning of Phillis Wheatley, Sally Hemings, Mary Seacole, Sarah Baartman, and Sarah Forbes Bonetta in relation to history and the contemporary moment. Through rethinking the stories of these women and their afterlives, Pinto offers new radical political futures for black feminist studies. She contributes to the fields of black studies and, queer studies of representation while challenging the depiction of celebrity women through celebrity culture. She adds to existing critical human rights scholarship on vulnerability with a novel reconfiguration of what agency and freedom look like in black studies and feminist studies. More specifically, she is in conversation with Judith Butler’s The Force of Non-Violence and Martha Albertson Fineman’s Vulnerability: Reflections on a New Ethical Foundation for Law and Politics. Even though Infamous Bodies, pivots toward the seeming individualism of celebrity culture, Pinto provides alternate ways to conceptualise the politics of desire.  Pinto reveals the centrality of race, gender, and sexuality in the formation of political rights and contends that feminist theories of black women’s vulnerable embodiment can be the starting point for future progressive political projects.

Marietta Kosma is a first year DPhil student in English at the University of Oxford at Lady Margaret Hall. Her academic background includes a master in English from JSU and a master in Ancient Greek Theater from the university of the Aegean. Her research interests lie in twentieth-century American literature, postcolonialism and gender studies. Her research focuses on the construction of African American female identity in contemporary neo-slave narratives. She has participated in numerous conferences. She has written in a wide variety of journals, newspapers, magazines and in an edited book collection. She is an editor for the Right for Education Oxford and for the Oxford Student.
View all posts by Marietta Kosma →
Tagged  Black History, Book Review.
Bookmark the permalink.