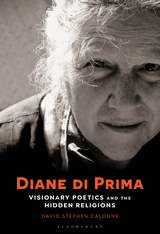 Poets have often figured as the liaison between mystic items and the vast audience to whom the inner meaning of such items was mysterious or unknown. In this sense, poets act as prophets, translators of symbols or, more metaphorically, bridges. It is precisely the idea of the poet as a bridge which David Stephen emphasises in Diane di Prima: Visionary Poetics and the Hidden Religions. In this 2019 volume, the legendary figure of the late di Prima is portrayed in turn as a bridge between cultures, key literary and intellectual movements, and ethnicities. Calonne’s is the (much needed) first book-length study devoted to the Italian American poet, writer and activist Diane di Prima, who passed away in October 2020, only a few months after Calonne’s book was published. The book captures the all-encompassing nature of di Prima as an artist, aptly intersecting her biographical events, her intellectual and cultural evolution and analyses of her major works. This syncretism is not surprising: in dealing with an author whose militancy in different political and poetic movements, interest in religions and Eastern philosophy, feminist engagement, autobiographical elements and ethnic identity merge all at once. By focusing on the connections between di Prima’s intellectual and poetic trajectories vis-à-vis religion, Calonne argues that ‘her work taken as a whole constitutes a kind of new scripture for the Beat/hippie generation’. (9)

Calonne rightly points out the dearth of critical studies on Diane di Prima: the existing scholarship in the disciplinary fields of Beat Studies and Italian American Studies is rather scant, given the significance of Diane di Prima’s contribution to both. Although Calonne is not the first critic focusing on di Prima’s relationship with the divine (see, among others, Anthony Lioi, 2009; Estíbaliz Encarnación-Pinedo, 2018; Nancy M. Grace and Tony Triglio, 2018),[i] in his work he identifies di Prima’s syncretic spiritual practice and her relationship with Buddhist and Chinese philosophy as the most defining threads in her literary life. He follows the latter throughout the chapters, structuring his study as a Bildungsroman: the chapters are in fact in-depth studies of di Prima’s works, discussed in parallel with her life experiences and intellectual relationships. The first chapter, devoted to her ethnic upbringing, is particularly worthy of notice, in that it details her first significant philosophical and literary influences and provides the instruments to detect throughout her works what Fred Gardaphé famously termed as ‘Italian signs’.[ii]

The impressive variety of events, sources, connections and literary achievements in di Prima’s career is interlaced with close readings of her lesser known and most famous works. At times, such an analytical method, together with the overarching exploration of topics and themes in di Prima’s literary output, can be almost overwhelming – to the extent of slightly diluting the clarity of Calonne’s argument. This is probably inevitable when treating an author who was active in the literary field for almost six (crucial) decades, and across very different cultural milieux. Nonetheless, the last two chapters in the book importantly centre on the ways in which di Prima’s religious syncretism informs her poetics and her teaching, therefore bringing the argument back to its initial thesis.

Significantly, Calonne points to Gloria Anzaldúa’s conceptualization of la facultad – the capacity to scan phenomena superficially and yet intuitively recognise their deeper meaning – as a framework to understand di Prima’s intellectual positioning and positionality as a poet and a writer. His proposal is all the more convincing if we consider both Anzaldúa’s and di Prima’s incorporation of this concept in their poetic but also deeply political praxis. The poet is therefore at once a prophet, a bridge, and a revolutionary. Diane di Prima. Visionary Poetics and the Hidden Religions is a valuable addition to both the Beats Studies and Italian American field, as not only does it trace the outline of an understudied artist’s life and works, but also highlights her connection with, and her championing of, crucial social causes related to issues of ethnic identity, class, and gender.

Book Review: Liking Ike: Eisenhower, Advertising and the Rise of Celebrity Politics by David Haven B...
Review: 'Indigenous Mobilities: Travellers through the Heart(s) of Empire,' Beyond the Spectacle (On...
Review: IAAS Postgraduate Conference, 'E Pluribus Unum: Out of Many, One'