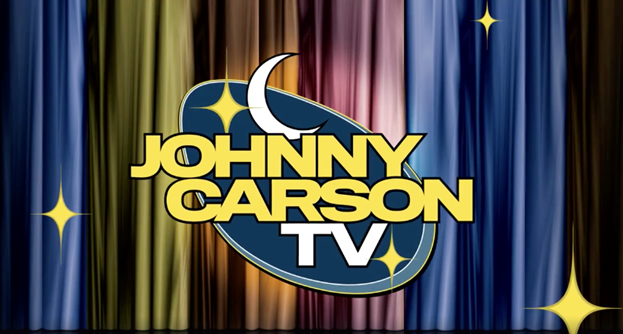 When Pluto created the Johnny Carson TV channel, it joined the ranks of the platform’s other “Classic TV” offerings, which includes channels dedicated to The Rifleman, The Addams Family, Mission: Impossible, Happy Days, The Love Boat, and other American television programs from the 1950s-1980s.[ii] What separates Johnny Carson TV from the other channels in the Classic TV category, however, is timeliness and topicality. While these narrativized programs in Pluto’s Classic TV line-up may make reference to current events or feature contemporary celebrities, they typically are not central to a modern viewer’s understanding and enjoyment of an episode. With Carson’s Tonight Show, however, timeliness and relevance are often foundational to multiple portions of an episode, particularly the monologue.

Johnny Carson’s monologue often included quips and one-liners about current events and the day’s news, and was—and still is—considered to be a staple of the late-night program format. In fact, topicality in the monologue was considered crucial enough to Carson’s monologue that at one point, NBC shifted the Tonight Show’s broadcast practices—instead of the program airing on a one-day delay, as had been done previously,[iii] the gap between taping and broadcast was shortened to two and a half hours.[iv] But what happens when this gap between taping and viewing is not just a few hours, but instead is a few decades? Major historical events and people are memorable, but a series of jokes on a “scandal du jour,” a minor pop cultural event, or a contemporary figure that has fallen out of the collective memory, could render monologue jokes more difficult to understand. In some ways, watching Carson’s monologue is like watching reruns of the news—the only difference being that without the story or context that newscasts provide, the viewer is left to their own devices to recreate that historical context themselves, and then apply it to the joke.

Pluto TV is not the only place The Tonight Show Starring Johnny Carson episodes are available to watch: on top of curated VHS and DVD collections that have been periodically released since Carson left his Tonight Show desk in the early 1990s, select episodes are also available to stream on Peacock (NBC’s free streaming platform), while Antenna TV (an American digital subchannel available over-the-air or on cable) schedules Carson every Monday-Friday.[v] Pluto’s “all Carson, all the time” approach to scheduling, however, is building off changes in time-shifting, on demand, and binge-viewing cultures that have impacted the television landscape, particularly after Carson’s retirement in 1992.[vi]

The non-stop stream of Johnny Carson TV rebukes traditional scheduling flows, especially those that were present in American broadcast network television before and during Carson’s time as host of The Tonight Show. With NBC’s Broadway Open House in 1950, the precedent of a late-night[vii] comedy program airing towards the end of a broadcast day was set, and late-night comedy talk shows started to become engrained in network scheduling practices after the success of NBC’s Tonight (as it was then-called) in 1954.[viii] Carson continued this trend when he became host in 1962, and became closely associated with the 11:30pm, late-night timeslot over the course of his thirty-year tenure. [ix]  Even though the channel promotes itself as being “dedicated entirely to the ‘godfather of late-night,’” Pluto’s around-the-clock stream of Carson complicates this association of late-night-style comedy (and Carson, more specifically) being made available only during late-night. Ultimately, Pluto’s steady display of Carson-era Tonight Show pushes the program out of the traditional late-night contexts the show helped to cement, and into the more contemporary “watch whenever, wherever” practices that late-night shows are using to stay relevant in the modern media landscape.[x]

Pluto’s shuttling of vintage programming into the modern media landscape allows for of the more “traditional” discourses of television to be reconsidered. One of these historical modes is television acting as an “ambient” medium—an ever-present object that can provide accompaniment that requires a low level of engagement for enjoyment, appreciation, or consumption—which dates back to the 1940s,[xi] with more recent discussions of ambient television focusing on passive consumption as a site of competition among streaming platforms.[xii] What Johnny Carson TV brings to the mix is an expansion of what can now be considered “ambient.” On Pluto TV, Carson-era Tonight Show episodes act as more than just the ambience of a “video lullaby” to be viewed from the couch or bed; episodes can now be streamed twenty-four hours a day, while inside or outside the home, doing a variety of tasks, or in any capacity or purpose a viewer chooses, so long as they have access to Pluto’s streaming app on a phone, computer, or television. [xiii] This level of accessible ambience also opens doors to new (and returning) viewers of The Tonight Show Starring Johnny Carson. Although I mentioned above how the ahistorical nature of these episodes available on Pluto could have the potential to remove some viewing pleasure, the show itself, as a whole, still finds a way to lure in the modern audience. As the specifics of a joke or plotline are not always the most important part of watching a vintage program; instead, pleasure or comfort can come from viewing that which provides nostalgia for the past.[xiv] Aside from the surface-level points of historical appeal, such as vintage fashions, guests, and jokes, Carson’s Tonight Show attracts viewers by exuding a deeper aura connected to a “simpler,” bygone era of American television, with three (or four) networks, and Johnny Carson as the “king of late night.”

On Pluto TV, The Tonight Show Starring Johnny Carson has been stripped of its original purpose in acting as a schedule’s nightcap, as the site of timely jokes and interviews with en vogue figures, or as a contemporary cultural forum. Instead, it has found new uses, and a new place in the modern media landscape: one where the untimely, out-of-context reruns act as (literal and metaphorical) mediated, accessible time capsules to be used whenever or however a present-day viewer wishes. Whether a viewer watches Carson—or other programs available on Pluto TV’s “Classic TV” lineup—as ambient television, nostalgia for the generalized or their individualized pasts, as archival materials, or just out of plain curiosity, the uses for these historical texts continue to diversify as their availability and accessibility increases. Johnny Carson may be timely, but through Pluto TV, he has been rendered timeless.

[i] “Pluto TV Is Making It Easier to Watch The Tonight Show with Johnny Carson and Three’s Company.” TV Guide. August 18, 2020. https://www.tvguide.com/news/pluto-tv-new-channels-johnny-carson-tv-threes-company/

[iii] That is, after the show went from live broadcasts to taped broadcasts in the 1950s or 1960s.

[v] The Tonight Show Starring Johnny Carson is available through these providers as of May 2021.

[vii] Traditionally positioned as being post-11pm

[ix] From 1962 until 1966, The Tonight Show actually began at 11:15pm, but in the context of this article, I consider this 15-minute difference to be negligible.

Laura C. Brown is a media studies PhD student in the department of Radio-Television-Film at the University of Texas at Austin. She received a bachelor's degree in history and a master's degree in film and television studies, both from Boston University. Her research focuses on American broadcast media history, critical industry studies, audiences, music on television, and failure. You can find her on Twitter: @lcbrown91.
View all posts by Laura C. Brown →
Tagged  Chat Shows, Streaming, U.S Television and Nostalgia Special Series.
Bookmark the permalink.