Organised by the European Association for American Studies, “20/20 Vision: Citizenship, Space, Renewal” coincided with the 400th anniversary of the establishment of the Plymouth Foundation and invited scholars to contemplate on American history, politics and culture. The conference called for an exploration of three broad thematic areas: the aspect of citizenship, issues of the environment and the idea of renewal. The overarching concept of “20/20 vision”, an optical term denoting normal visual clarity and sharpness of sight, sought to underscore pressing questions on historical distance, visibility and invisibility of various American socio-historical, cultural and literary aspects. In this way, the event allowed Americanists – mostly from European and American academia – to re-frame and re-evaluate the plurality of narratives and counter-narratives throughout the history of the American nation. The quadricentennial became a reference point not only for sheer celebration but also critical thinking. In the keynote lecture “1620 / 2020: Colonies, Corporations, and Constructing American Cultural Histories”, which was chaired by the President of EAAS Philip McGowan in the opening day, Michelle Burnham (Santa Clara University, USA) laid the historical framework which was explored through various lenses by scholars in the three-day event. [1]

The conference was characterized by the reframing of American literature (mostly prose and poetry, but also drama and film) through established and new critical methodologies. The major thematic points of the panels and keynotes were Ethnicity, Multiculturalism, Immigration, Nativity, Transnationalism, Feminism, Race but also the Anthropocene, Ecology and Queer Studies. The (r)evolutions of the American novel were explored in length and scope by dissecting African American, Asian American, Native American, Latinx and other American prose. For example, Constante González Groba (University of Santigo, Spain), looked into the transformations of slavery from the plantation to the prison in Jesmyn Ward’s Sing, Unburied, Sing and Colson Whitehead’s The Nickel Boys; Christelle H Soon-Lahaye (University of Rouen, France) discussed the claiming of America in Maxine Hong Kingston’s China men; Alina Ciobotaru (University of Bucharest, Romania) explored the aesthetics of Magical Urbanism in Ana Castillo’s So Far from God; and Jelena Sesnic (University of Zagreb, Croatia), investigated a postmodern world of surveillance in Dave Egger’s The Circle. [2]

Poetry of the 20th and 21st century, from Modernism to Digital Modernism and from Avant-Garde traditions to contemporary innovations, was also explored. The conference offered both readings of well-known poetry collections and investigations of unexplored poetic landscapes of groundbreaking aesthetics. Philip McGowan (Queen’s University Belfast, UK) explored, for example, spatiality and citizenship in Solmaz Sharif’s Look where the vocabulary of the Dictionary of Military and Associated Terms comes into play; Nazir Bibi Naeem (University of Göttingen, Germany) investigated exile and transnationalism in Agha Shahid Ali’s Poetics; and Secretary General of EAAS Tatiani G. Rapatzikou (Aristotle University of Thessaloniki, Greece) showcased the significance of digital poetry kinetics pointing out the development of diverse reading and interpretative possibilities. [3]

Other panels brought their attention to drama and film. The panel “Drama, Theater, Performance Art” brought together papers on American dramaturgy and performing arts. Chaired by Angello Capasso (Accademia Belle Arti di Carrara, Italy) the discussion that followed posed questions on the political function of performance within the historical context of the mid-war and post-war period in America and Europe. As Capasso argued, the investigation of aesthetics is a major key in reconfiguring the sociopolitical context of this epoch. On the other hand, the panel “Ecological Themes in Film” brought its attention to motifs of environment in films by directors such as Terrence Malick, Duncan Jones and Andrea Arnold. Johannes Vith (University of Innsbruck, Austria) introduced his discussion on the Anthropocene in lunar cinematic landscapes while Michael Fuchs (University of Oldenburg, Germany) made light of contemporary cinematic examples where gothic and hybrid geographies prevail. 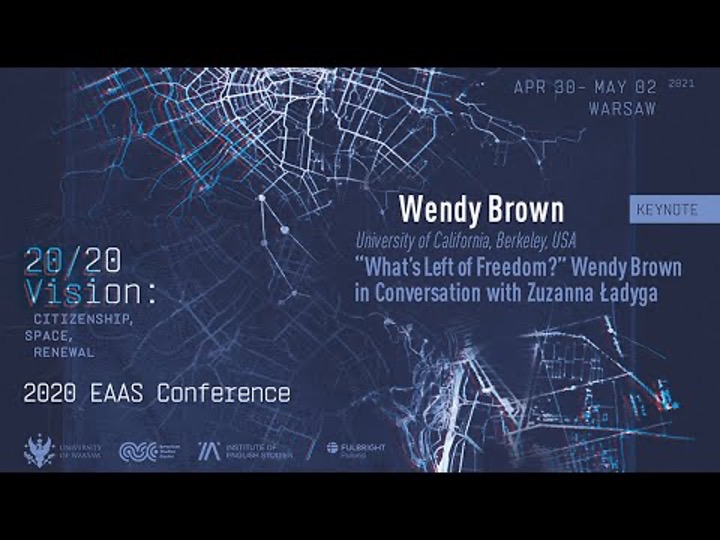 I should also point out that while many of the panels were past-oriented, focusing on the reconsideration of cultural histories, there was also a seminal emphasis on new artistic modalities and academic perspectives. In this way, the conference produced not only a revisiting of established socio-historical events and literary milestones but also a dialectics on the future(s) of American cultural and political horizons. Presentations on the history of ideas and new methodologies captured novel tendencies. For example, in his keynote lecture Tomasz Basiuk (University of Warsaw, Poland) proposed a methodological approach on Queer Studies in a transnational context. [4] At the same time the 4thBiennial EAAS Women’s Network Symposium entitled “Feminisms in American Studies in/and Crisis: Where do we go from Here?” that took place as a part of the larger conference posed urgent questions on the next chapter of feminism. [5]

It is no surprise, given the thesaurus of American cultural histories, that this interdisciplinary event was dominated by Americanists of literature, performing and visual arts. At the same time a range of multiple disciplines was also represented, including political theory, law, history, religion studies and digital humanities. As a result, we were reminded that identity is formed within a larger context of “cultural poetics” that includes legislature, public policies, religious institutions, political ideologies and digital ecologies. In times of sociopolitical instabilities, several panels focused on the political reality of America. The panel “Citizenship and Immigration” offered a crucial discussion on the policies connected to the Mexican-US border in the Age of Trump’s “Make America Great Again” while the panel “Feminism, Neoliberalism, The Left” brought together scholars that detailed narratives of identity politics, patterns of gender-traditionalism and aspects of black feminism in U.S. Democracy. On a wider context, in her keynote lecture “What’s Left of Freedom?” Wendy Brown (University of California, Berkeley, USA) posed seminal questions on the current state of “liberal democracies” in America. The lecture was complimented by a captivating discussion chaired by EAAS Vice-President Zuzanna Ładuga (University of Warsaw, Poland). [6]

In a conference with a wide spectrum of themes, the importance of a clear concept (such as the optics of a cutting-edge “20/20 vison”) along with well-organized panels that construct specific thematic pillars is of the outmost importance. Instead of succumbing to an unfiltered plethora of heterogenous hermeneutic scopes, the conference’s strongest feature was the ability to organize each panel into a focused scientific microcosm while the totality of the papers formed a series of narratives and counter-narratives on American cultural histories. Academic inclusiveness was combined with an exploration of various territories in Humanities and Social Sciences. By posing vital questions on literature, history and politics 400 years after the establishment of the Plymouth Foundation, the conference achieved an invaluable goal: the reframing of American culture through the academic output of scholars from around the globe.

Zafiris Nikitas holds a PhD in Theatre Studies and is a Postodoctoral Researcher. He studied Law and Theatre at the Aristotle University in Greece. He has published articles in international peer-reviewed Journals and participated in multiple Symposiums. He is a member of HELAAS (Hellenic Association for American Studies) and his scientific interests focus on the cultural poetics of Modern Greek, American and European Theatre.
View all posts by Zafiris Nikitas →
Tagged  Conference Review, EAAS, Event review.
Bookmark the permalink.