“Be Curious, Not Judgemental.” Influences of Positivity and Kindness in Ted Lasso 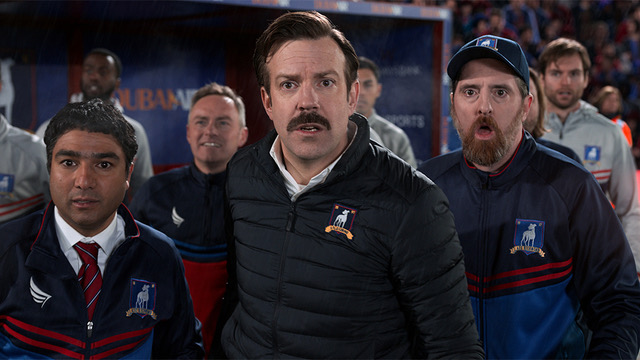 In the summer of 2020, Ted Lasso, a sitcom centred around a former NBC soccer promoter, was released to both critical and commercial success and appeared to channel a specifically upbeat register quite unlike its peers. Built on the tried-and-tested ‘fish out of water’ comedy trope, Ted Lasso centres on the eponymous American Football coach who is employed as a Soccer coach for fictional premier league team, AFC Richmond. The show’s branding and promotional campaign suggested that the aforementioned rehashed trope, namely goofy protagonist clumsily happening upon hijinks and confusing situations, would be its operative tone. Instead, the show took audiences by surprise with its wholesome messages of goodwill and nuanced character studies, joining a rich history of American sitcoms that are not simply comic in tone but also layered with messages of humanity, goodwill, and positive representations.

Initially due to the ongoing Coronavirus pandemic, Ted Lasso became a beacon of positivity and drew conversation on social networking sites such as Twitter  with discussions ranging from its approaching of themes and issues around masculinity, femininity, abusive relationships, contributing to its nuanced dialogue.  The charm of the show is routed in heartfelt messages and true-to-life nature, creating a ‘Lasso Effect‘ movement on social media that endorsed this positive attitude.

This ‘effect’ is cited in a number of sequences in the show where characters face particular hardship. For example, Ted, during one private moment, is going through the turmoil of his divorce and is disturbed by the kit man to whom Ted responds aggressively. Typically, this scenario would have been drawn out and drama would derive from the main character’s response (Detweiler 2012), however in Ted Lasso any tension that arises is ultimately dealt with in a swift manner, using it as poignant moment for reflecting on optimism and growth.

However, despite the positive following the show has garnered since its release, claiming its new and fresh take on sitcom narratives, there is indeed a rich history of American sitcoms which have laid the foundations for the unique positive approach Ted Lasso utilises all the way through its ten-episode run. With this view, it opens up a number of questions about the show and in particular how previous sitcoms have served as a template for Ted Lasso, informing the construction and representations of kindness and positivity that have made the show so popular.

Ted Lasso makes interesting use, for example, of the family workplace narrative and the archetypal male character at its centre, deploying these facets to contribute a reading of optimism, goodwill, and positivity. Traditionally American sitcoms have utilised a workplace/family narrative, focusing on the patriarchal figure and the set of specific tropes associated with genre. Judy Kutulas argues that the most common sitcom subject was the ‘American family’. Examples of this date back from early sitcoms such as the Dick Van Dyke Show (1961 – 1966) through to All In The Family (1971 – 1979).

Furthermore, the 1972 medical war sitcom M*A*S*H in many ways paved the way for many other sitcoms and their characters to develop beyond the standard sitcom tropes, providing a dialogue of, at the time, contemporary issues of politics, war and gender. It was Alan Alda’s character Hawkeye Pierce that, like Lasso, captured the hearts of the audience. Hawkeye is not only constructed as a leader and alpha male of the 4077th unit, but he is also represented as familiar to M*A*S*H’s intended audience with flaws and idiosyncrasies that, ultimately, they can engage with on a personal level. Gustave F. P. Sison (1985), Jr states that, Hawkeye ‘is an excellent representation of the highest moral reasoning’. He sees the war for what it really is, and which opposes his basic ethics. Lasso shares many qualities with Hawkeye; they both hold positions of leadership whom the other characters look up to; they are constructed to be carefree and optimistic but possess a serious and moral wisdom which they impart onto others and thus imbuing the series, and all those who watch, with a path to perceived betterment

Another sitcom, forty years apart from the previous example, The Office (US) offers a similar insight to the leading male character and insightful narratives full of optimism. NBC’s The Office, modelled on the original sitcom from the UK, was adapted for American television in 2005. At the time of development, it was stated by test audiences and cast members that the foolish boss character, in this case Michael Scott, was to be made more likeable to appease audiences (Parade Magazine 2020). David Brent, the boss in the UK Office (2001 – 2002), was constructed as an insufferable, inept manager whose sensibilities could not be further away from Lasso; whereas Michael Scott’s character, although he was often represented as naïve and foolish, also has a good heart and by the end of his time on the series, he too captured the audiences’ heart.

Regarding both the show and the character, Ted Lasso inherits and adopts a number of Michael Scott’s personality traits and characteristics. For example, the jovial naivety that Ted possesses is paralleled with that of The Office and it’s manager-protagonist. Moments of slapstick, such as Ted spitting fizzing water out at the press conference and nearly getting knocked down whilst crossing the road, do reflect the sensibilities of Scott. However, Scott and Hawkeye’s more serious, wise moments of leadership are paralleled in Lasso and can be seen when he interacts with others who underestimate him, in turn endearing himself to both audience and character alike.

What we can draw from The Office and M*A*S*H is that they have had impact on American culture, tapping into the zeitgeist of the time, and in one way or another influencing opinion and setting the standard of what an audience expects from a sitcom. Therefore, the Lasso effect that is commonly referred to on Twitter and other social media sites may be not something as irreverent as first anticipated, but something that has been cultivated from a rich history of the American sitcom and which remains popular with critical and commercial audiences.

Lewis Kellett is a fully funded PhD student and Graduate Teaching Assistant at Sheffield Hallam University. He is researching the Construction and Representation of Youth in 21st Century British Social Realist Cinema. He teaches in the Media and Communications department on a number of modules relating to his PhD. Recent achievements include; a book review in the Journal of British Cinema and Television, an appearance on a discussion panel ahead of a screening of Ken Loach's Sorry We Missed You, and radio interview related to controversial film Blue Story and the representation of youth. Recent conference papers include, The Body as the Most Indisputable Materialisation of Class: An exploration of the Classed Body in Social Realism, presented at the Bodies of Knowledge conference at York St. John University. And, Girlhood and Class in Fish Tank presented at Assuming Gender at Cardiff University.
View all posts by Lewis Kellett →
Tagged  Sitcom traditions, Ted Lasso, U.S Television and Nostalgia Special Series.
Bookmark the permalink.