Quantum Leap: Jukebox Nostalgia and the Flattening of History 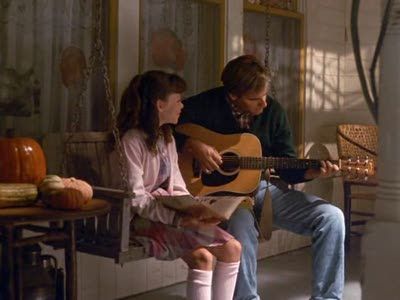 Sam playing John Lennon’s Imagine to his little sister four years before it was written (‘The Leap Home: Part 1’, 03×01)

In the opening scene of the Quantum Leap episode “Animal Frat” (2×12), Dr. Sam Beckett ‘leaps’ into the body of Knut “Wild Thing” Wileton, arriving in his body on top of a pool table as two ‘Tau Kappa Beta’ fraternity brothers pour beer from the keg into Sam’s startled face. A raucous house party rages in the background as The Kingsmen’s seminal 1963 rendition of Louie Louie booms from unseen speakers. By this point in the show’s run, the audience is aware that this conspicuous use of popular music in the soundtrack is more than mere background noise, it is important mise-en-scène. The viewer is instantly transported, with Sam, into all of the countercultural insinuations of rock and roll and youthful rebellion inherent in that simple I-IV-V chord progression. It is the mid-‘60s and the nascent teenage youth culture of the ‘50s has grown and matured into a social and political movement that has already started to question the old Eisenhower era certainties of post-war American society.

Quantum Leap ran for a total of five seasons from 1989-1993. Created by Donald Bellisario and starring Scott Bakula as Dr. Samuel ‘Sam’ Beckett and Dean Stockwell as Admiral ‘Al’ Calavicci, the show aired in prime-time slots on NBC to critical and commercial acclaim. The premise surrounds Sam, a quantum physicist (with five other doctorates!) and an experimental time-travelling device of his own design that enables him to ‘leap’ into various people’s bodies within the span of his own lifetime. Sam becomes stuck in this constant loop of time travel, unable to leap home. While inhabiting the body of historical protagonists, he must ‘right, what once went wrong’, enabling the mysterious karmic universal powers to facilitate a further leap, in the hope that eventually he will return home to 1999.

The period between 1989 and 1993 also saw the publication of Fredric Jameson’s highly influential Postmodernism, or the Cultural Logic of Late Capitalism (1991), and also Francis Fukuyama’s now infamous The End of History and the Last Man (1991). For reasons of brevity, I will avoid delving too far into Postmodern discourse. However, I find the fact that both of these influential studies approach the idea of ‘the end of history’ from dialectically opposed ideological positions to be continually fascinating and instructive to late 20th century American Studies. I see the use of popular music in Quantum Leap as highly representative of Jameson’s arguments regarding nostalgia and the flattening of radical history. At the same time, Sam uses time travel to tackle relatively minor issues in relation to the gravity of the ideological battles of the era, seeming to align with Fukuyama’s assertion that liberal democracy and capitalism represent history’s end point. Now that America and ‘the West’ have won the ideological battle over Eastern Communism and Marxism, what else remains but to tie up the loose ends and minor injustices of history?

In the pilot episode, Sam inhabits the body of a 1956 air force test pilot (soundtrack provided by Elvis, Roy Orbison and Pat Boone) who must successfully break the sound barrier in a jet for the first time. Sam does this but remains in the body of the pilot. He then uses his futuristic medical knowledge (one of those doctorates presumably) to save the life of his pregnant wife who had ‘originally’ died in childbirth. This focus on the minor, personal and often romantic problems of the the past is a constant in the show. The larger issues are to be left alone; history is to be left to run its course. This approach assumes that the larger concerns of history will come to a satisfactory conclusion on their own, because American freedom and the spread of neoliberal capitalism is inherently ‘right’.

This raises the rather paradoxical situation where Jameson’s and Fukuyama’s theses align. Jameson’s exposition of ‘The Nostalgia Mode’ in ‘70s and ‘80s cinema is helpful here. This explains how I see the use of the ‘jukebox soundtrack’ in Quantum Leap as damaging to the potential of countercultural production in the era of the ‘cultural logic of Late Capitalism’, where ‘the past as ‘referent’ finds itself gradually bracketed, and then effaced altogether, leaving us with nothing but texts.’[i] The whole series is full of examples of this, using short-hand signifiers of ‘50s and ‘60s culture to instantly set the scene, thus flattening the radical history of these artistic texts.

In “How The Tess Was Won” (01×05), a young boy strumming his guitar reveals the playful consequences of time travel. After saving the life of a piglet, Sam is relieved to see it running away into the field. He yells ‘Piggee Souiee!’. The boy sings this along to a staccato vamp between the A and D chords on his acoustic guitar. Sam and Al give each other a knowing look and Sam suggests ‘Maybe Peggy Sue would sound better?’. The episode is set in Texas, 1956; the young boy is Buddy Holly. These pop culture interactions are common in Quantum Leap and other TV shows and films of the ‘90s; think of a young Forrest Gump teaching Elvis how to dance from the hips because of his leg braces. In reality, Buddy Holly was already 19 in 1956 and had signed a record deal with The Crickets. Pop culture has eclipsed traditional forms of historical understanding and these nostalgic pop culture references and simulacra blunt critical factions by celebrating the benign and erasing the radical context.

“The Leap Home Part 2” (03×02), brings up a central issue of ‘60s culture: Vietnam. In an ambitious and award winning episode, allusions are made to famous Hollywood Vietnam movies of the ‘70s and ‘80s. Swooping helicopters and expansive cinematography bring to mind Coppola and Stone. Differentiating Quantum Leap from these movies, the show’s music is almost always diegetic, as opposed to the booming, Scorsese-esque over-dub we see Zemeckis employ in Forrest Gump. This serves to align the viewer and show in accepting the cultural context as historical fact, furthering the obliteration of distance and perspective that would enable historical understanding.

In the episode, Sam leaps into the body of Herbert “Magic” Williams, an African American Navy SEAL. The character’s Blackness is effaced in a very problematic way, not least in the fact that apart from a brief glance in a mirror, he is played by white actor Scott Bakula. In the SEALS’s converted tent/bar where much of the action takes place, Raindrops by Dee Clarke, Someday We’ll Be Together by The Supremes and I Wish it Would Rain by The Temptations play loudly over a stereo behind the bar. These songs trigger a sense of nostalgia in the viewer’s collective memory, a short hand and superficial way of representing history. Moreover, they are an example of the pastiche that Jameson describes in that they are shorn of any sense of radical difference or racial representation by their context. An African American soldier in Vietnam tuning the radio to a Motown song among a group of white squad-mates would, we expect, contain an element of dissent toward the hegemonic culture and explicitly refer to the very volatile cultural and racial fault-lines that were present in the ‘60s. Yet, there is no reference to the civil rights struggle or the injustice, violence and murder visited on Black Americans during the ‘60s. This manifested itself in Vietnam in glaring inequalities where African American’s both served and died in vastly disproportionate numbers to their white countrymen.[ii]

It may seem inconsequential to point out historical inaccuracies like these, yet they exemplify the ‘radical break, or coupure’ that Jameson claims occurs within postmodernist culture. According to Jameson, ‘the underside of culture is blood, torture, death and horror.’[iii] The use of popular music in so much of ‘90s American film and television in this way is more than just a convenient periodising tool, although it obviously works well in that regard. It represents the flattening of historical understanding and the erasure of this ‘blood, torture, death and horror’. In the above examples we can see the undercutting of historical and societal context in the emergence of early rock and roll music and then how the story of African Americans during the ‘60s is shorn of cultural value as the important cultural role of soul and Motown is divorced from the civil rights and black power movements that gave rise to it. This ‘juke-box soundtrack’ serves to reduce the crucible of ideological and emancipatory politics and culture now referred to as ‘The ’60s’, to a mere signifier for postmodern viewers shorn of historical understanding.

Fraser Hammond is a final year, part-time PhD student in the Andrew Hook School of American Studies at Glasgow and in the process of writing up his thesis. His interests include '60s Counterculture, Postmodernism, The history of the American Left, Bob Dylan, '90s cinema, geeking out about guitars and walking his Basset Hound, Ladybird.
View all posts by Fraser Hammond →
Tagged  Jameson, Music, postmodernism, Quantum Leap, U.S Television and Nostalgia Special Series.
Bookmark the permalink.