Book Review: Trump and Us: What He Says and Why People Listen by Roderick P. Hart 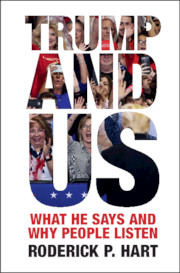 Roderick P. Hart’s book was written in a time noisy with the sounds and echoes of Donald Trump’s Twitter feed.  The political world is quieter now.  Former President Trump can hardly be heard from his Florida base.  He has not disappeared, and his continuing influence on the Republican Party and on the practice of US politics is evidenced by the nervous cotillion being performed around him.  Witness Senator Mitch McConnell who, in rapid succession, voted to acquit Trump in the second impeachment trial, made a speech excoriating Trump for his role in prompting the January 6th 2021 attack on the US Capitol, and only days later affirmed that he would ‘absolutely’ support Trump’s return to the White House should the Donald gain the GOP nomination in 2024.

Representative Kevin McCarthy, Leader of the Republican Party in the US House of Representatives, was just one of the prominent members of the party who visited Florida to pay homage to the former president within days of the impeachment acquittal.  In Washington, the Republican Party’s officeholders have proved impervious to President Biden’s gestures towards a cross partisan approach to the economic, social and health problems facing the nation.  Rod Hart’s research, embedded though it is in data from the 2016 election, provides insight into the caution with which these political leaders are addressing the question of how to progress after Trump’s 2020 election defeat.

Hart brings both extensive qualitative content analysis and well-honed quantitative computer crunching to bear on Donald Trump’s rhetoric in his search for the link that this candidate, and president, made with his audience, his constituency. The book examines the impact of Donald Trump as a response to the anxieties felt by a substantial sector of the American electorate.  Sections on ‘Feeling Ignored, …Trapped, …Besieged, … Tired, …Resolute’ each contain chapters outlining how Trump’s messages address these feelings and help take the voters from Feeling Conflicted to Feeling Resolute in the company of this new kind of political leader. Trump did not look to theory, history or aesthetics to construct his responses to these feelings.  He embraced them; he told his audiences of people who felt overlooked, overflown and abandoned that he loved them.  He reacted to their issues with such passion as to convince them he alone was open to their pleas.  And while he might sometimes transgress, vicariously that could be rather thrilling, and he did not divert from the conviction that he was right about the larger truth.

Hart identifies Trump’s rhetoric as negative, emotion-based and assertion-laden when compared with all presidential candidates since 1948.  Trump’s 2016 narrative addressed fears, frustrations and sentiments associated with a lost sense of nation, self and order.  His speaking style used small words, short phrases, a limited vocabulary and repetition.  His stories and the points he made, while not necessarily accurate, were consistent, exaggerated, insistent and memorable.  He delivered his messages with an apparent openness and relentless energy that gave him a personal and intimate connection even with large crowds.

Trump’s well-known and extensive use of Twitter also gave a sense of personal and intimate connection, even when his follower base approached 90 million accounts.  But as Hart points out, most Americans did not hear about Trump’s tweets by direct contact.  Even though the Trump White House ran the presidency as though it were a four-year long election campaign, only a tiny proportion of the electorate ever heard him speak live.

While Trump’s tweets were often ‘candid, outlandish, memorable and retweeted’ (199) most Americans became aware of Trump’s latest statements when they were reported through mass media, cable TV or print.  This brings into sharp relief the complex relationship between the public and an increasingly pluralised media which no longer enjoys the widespread trust of its readers, listeners and viewers.  Hart’s analysis evidences the misfit between mainstream journalistic output and what the Trump-supporting audience wanted to hear.  The gap between this audience and traditional media was reinforced by Trump’s attacks, but journalistic stereotypes of Trump voters did nothing to help understanding nor did communication between those media that were attempting to be objective and the audience they were trying to reach.

One of the tools that Hart develops to examine Trump’s communication with his supporters draws on the concept of the ‘paranoid style’ in US politics.  A sense of anger and grievance, transcending facts, linked Trump and his followers.  Hart searches presidential candidate rhetoric for words that are indignant, personal and reflect a sense of victimisation, isolation and threat.  On this ‘paranoid measure’ Trump scores most highly out of all twenty-six major party presidential candidates since Harry S. Truman defeated Thomas Dewey.  Here, at least, Donald Trump is winning.

The Trump phenomenon stimulated a considerable number of books that examine the changing nature of political communication in a changing media landscape.  Complementing Hart are volumes such as Leticia Bode et al, Words That Matter: How the News and Social Media Shaped the 2016 Presidential Campaign (Brookings, 2020) and Robert E Denton Jr (ed), The 2016 US Presidential Campaign: Political Communication and Practice (Palgrave Macmillan, 2017).  There is a further volume on the 2020 election, edited by Robert Denton, due out in 2021, that will be required reading for scholars interested in this area.  Marco Morini’s Lessons from Trump’s Political Communication: How to Dominate the Media Environment (Palgrave Macmillan, 2020) examines in detail Donald Trump’s tweets and his use of language.  Hart’s book benefits especially from the availability of a huge data base of presidential election rhetoric and a well-established set of analytical tools that add hard social science to the narrative.

Republican presidential candidates have received most popular votes only once (2004) since 1988.  The GOP also attracts a minority of the national vote at senatorial level and relies heavily on gerrymandered districts in the US House of Representatives and in many state level elections.  In these circumstances, the ability of any party asset to gain the loyalty of a substantial voting bloc and to draw huge financial support from those supporters is not something that can be set aside without thought.  Rod Hart’s book helps readers to understand why neither major party can afford to ignore the charisma of Donald Trump, and the genuine sense felt by his supporters that the system is not working for them.

Book Review: Embodying Masculinities: Towards a History of the Male Body in U.S. Culture and Literat...
Book Review: The Sum of Our Dreams by Louis Masur
Review: Joint BrANCH and HOTCUS Annual Conference

Professor Emeritus of American Studies (De Montfort University & Eccles Centre for American Studies at the British Library), Distinguished Fellow at RAI Oxford, Co-chair American Politics Group. A career spent heavily into US Election campaigns. Currently early into retirement and not quite worked out what it's for.
View all posts by Philip Davies →
Tagged  Book Review, Donald Trump, Trump.
Bookmark the permalink.