Mirroring the Medium: Depictions of Female Domesticity in ‘WandaVision’ 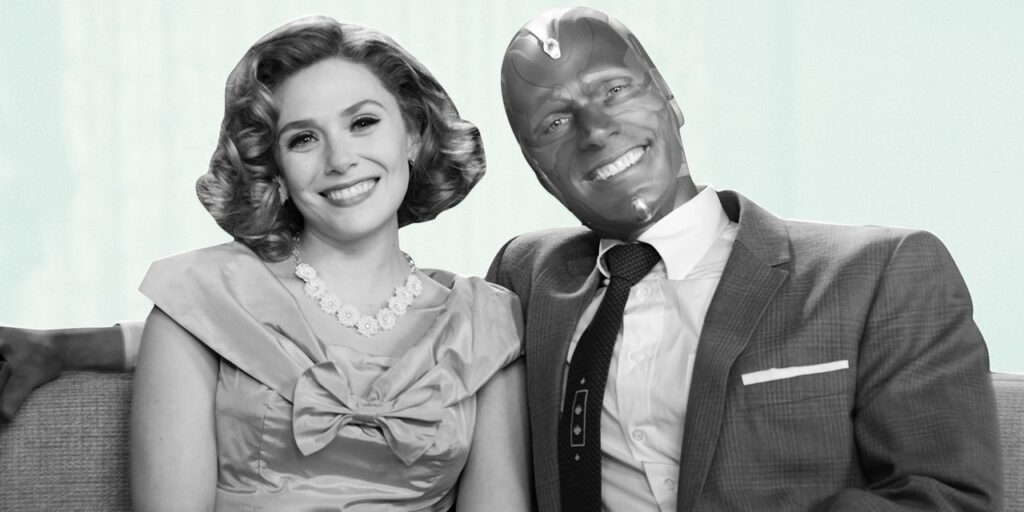 WandaVision (2021) is, at its core, a story of grief and nostalgia. In its genre-bending magnificence, WandaVision narrates the evolution of American sit-coms, hurtling us forward through the second half of the twentieth century and into the twenty-first, as the black-and-white pastiches of The Dick Van Dyke Show and Bewitched transform into the familiar worlds of Malcolm in the Middle and Modern Family. However, in mirroring the medium of American sit-coms, the series also masterfully chronicles the changing role of women in American society through its portrayal of the picturesque nuclear family life – and the fantasies which uphold its illusory existence. 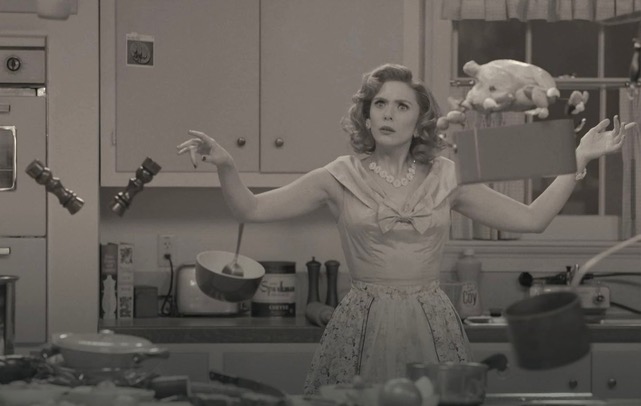 As we are transported into the world of Westview, New Jersey, we find Wanda Maximoff and Vision settling into a life of domestic newlywed bliss in the confines of 1950s sit-com America, complete with its monochrome filter. The series follows the events of Avengers Infinity War (2018) and Avengers Endgame (2019) in which Vision was killed by Thanos as part of his Malthusian conquest to wipe out half of all humanity with a single snap of his fingers using the infinity stones. Wanda is one of the victims of  “the snap” – where half of humanity vanished for five years – and thus when she returns in Endgame, she is still processing the trauma of Vision’s death, setting the stage for the exploration of her grief in WandaVision. In the opening episode, Wanda is depicted as the traditional 1950s American housewife, with Vision (the human-robot synthesoid) inhabiting the role of the male breadwinner working at a company ironically titled “Computational Services.” Wanda and Vision’s middle-class lifestyle, as depicted by their polished new home and respectable formal attire, mirrors the stylistic tone of 1950s “Golden Age” television and, by extension, the image America was seeking to project of “the good life” in the early years of the Cold War. Indeed, sit-coms of this era such as The Donna Reed Show portrayed the mundane yet pleasant nature of white nuclear family life in suburban America, which fed into American Cold War propaganda boasting of its ability to fulfil women’s domestic and consumerist desires as superior to the USSR. 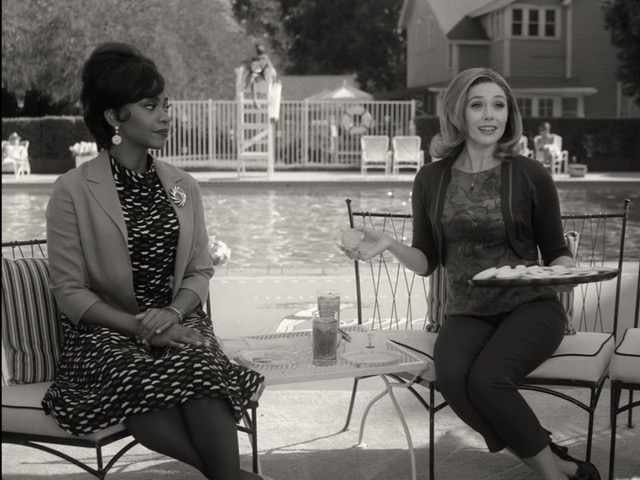 The proceeding episode, which takes us forward into the 1960s, does not dramatically shift in its tone or in its representation of women, who are primarily portrayed in this episode as housewives engaging in community work – namely organising a charity talent show “for the children” who are notably absent for the majority of the series. While Betty Friedan’s The Feminine Mystique (1963) challenged traditional notions of womanhood, this cultural revolution did not necessarily extend to 1960s sit-coms which retained depictions of women confined to suburban domesticity such as Mary Tyler Moore’s “stay-at-home mom” character in The Dick Van Dyke Show. Wanda’s desire to have children is encouraged by nosy neighbour character Agnes, with Wanda’s miraculous pregnancy at the end of the episode providing a further layer to her construction of the feminine domestic ideal. 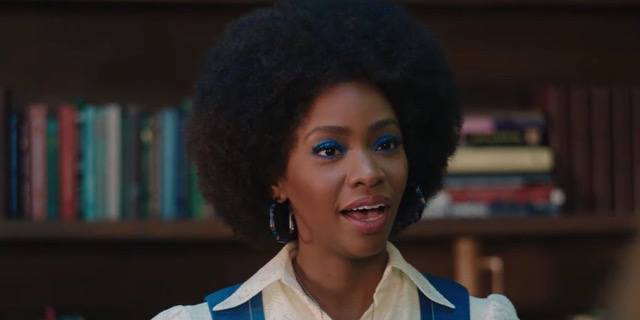 The 1970s era-episode presents us with greater divergence from the domestic ideal – whilst still maintaining Wanda’s consistent role as homemaker – through the character of Geraldine (who is actually Agent Monica Rambeau) assuming the role of the independent working woman. Geraldine tells a heavily pregnant Wanda about her temp job at an advertising firm and how after landing a pitch, her boss told her to “clean out her desk.” Wanda expresses concern that Geraldine had been fired, but Geraldine enthusiastically states “Oh sugar, he hired me!” This exchange simultaneously speaks to the progress and perils of women’s work in the 1970s, illustrating that while women had advanced in American society through gaining greater economic freedoms, they still faced the daunting prospect of losing their job. In a sense, Geraldine’s experience parallels Wanda’s inconceivably short 48-hour pregnancy, as both women’s stories essentially gloss over the complex reality of a nine-month pregnancy and the long struggle for women’s equality in the workplace.

As Andrea Press (2009) notes, television in the 1980s and 1990s increasingly focused on women making “choices” between work and family. While Wanda in the series does not have a formal job, she is forced in the 1980s-themed episode to come to terms with Vision’s growing concerns surrounding Wanda’s “control” over Westview’s residents and the hard choices this presents to her in terms of maintaining their idyllic – yet illusory – family life.  In many respects, the toll that  maintaining this intricate facade takes on Wanda reflects the way in which women have been systematically burdened with both emotional and domestic labour. Wanda’s role as a mother is explored more thoroughly in this episode through the 1980s sit-com trope of “teachable moments” as her twin sons, Billy and Tommy, use their inherited magical powers to age themselves from babies to four-year-olds to ten-year-olds in the space of a few hours and begin to comprehend the world around them. Wanda is frustrated by the fact that she cannot control her twins, reflecting how the sit-com reality she constructed is slowly slipping away from her. Wanda’s decision to literally “roll credits” at the end of the episode as Vision begins to interrogate her about Westview’s origins reflects the way in which she has harnessed the vessel of American sit-coms – and, in Wanda’s case, the American housewife – in order to escape the painful realities that lie outside of Westview. 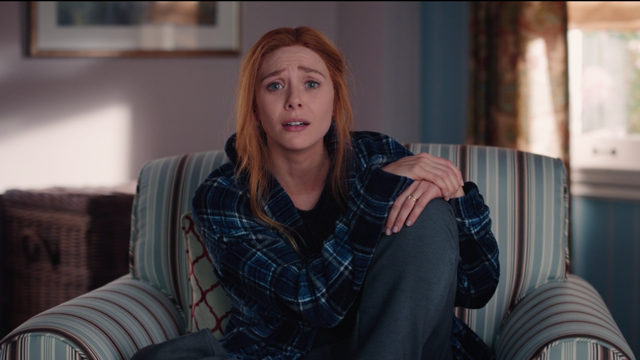 In episodes six and seven, we are brought forward to the 21st century, where the myth of domestic bliss unravels further as a visible rift between Vision and Wanda persists. Yet, Wanda is also becoming more independent, to the extent that she begins to resent Vision, suggesting that the distance between them is both emblematic of Wanda’s desire to avoid confrontation with the truth, and her increasing realisation that the sit-com decades are progressing closer to modern day. Wanda appears unmoored in this episode, to the extent that she decides to leave her children with the increasingly suspicious Agnes so that she can sit at home in her pyjamas and eat cereal, which she describes as a “quarantine-style staycation.” Mirroring the style of Modern Family, Wanda breaks the fourth wall to reveal to the camera: “I don’t understand what’s happening. Why it’s all falling apart and I can’t fix it.” Wanda’s breakdown reflects the way in which modern sit-coms seek to present the unfiltered truth of family life and the toll it takes on women, which historically has always existed outside of television world. Yet, unlike sit-coms which typically end with a pleasant resolution, WandaVision shatters this illusion by taking a turn toward the sinister, as episode seven ends Wanda’s sit-com facade with the reveal of Agnes’ true identity as the witch Agatha Harkness.

Wanda’s family in Sokovia watches The Dick Van Dyke Show in a brief happy moment before a bomb hits their home. Credit: WandaVision (2021), Episode 9 ‘Previously On’, distributed by Disney+.

The penultimate episode reveals that Wanda’s Westview is based on memories of watching these very sit-coms with her family in the fictional Soviet state of Sokovia, right before a Stark Industries bomb killed her parents. Cold War imagery envelops this entire scene – Agatha even remarks “love the Cold War aesthetic” – which forms a stark contrast to the pleasant suburban life of Westview, illustrating the transnational appeal of the “American Dream.” In this sense, viewers can read Wanda’s desire to escape to her own imaginary world of American sit-com life as a desire to embody an illusory on-screen version of domestic bliss. The series finale, which sees Wanda embrace her true form as the Scarlet Witch and the chaos magic she is imbued with, essentially obliterates the sit-com reality of Westview and the corresponding role of American housewife that she gave herself within that reality. The presence of this chaos magic, and the Scarlet Witch herself, therefore forms the optimum foil to the idyllic sit-com reality in which instability and injustice are rarely featured, suggesting that akin to WandaVision, sit-coms themselves are ultimately an illusion.

Stephanie Burt, “We Live in the World of ‘WandaVision,’” The New Yorker, March 11, 2021. https://www.newyorker.com/culture/cultural-comment/we-live-in-the-world-of-wandavision

Emilie Cunning is a student of American History, particularly interested in racial and imperial dimensions of American domestic policing. Emilie is also intrigued by American Cultural History, and believes that cultural mediums such as film and television can be utilised as a lens to reflect and reveal aspects of the American identity. Emilie has previously written on the politics of the film 'BlacKkKlansman' (2018) as part of her studies, and was recently awarded the BAAS Best Undergraduate Essay Prize for her essay on the Black Lives Matter movement. Emilie has just finished up her undergraduate studies at UCL Institute of the Americas and will be pursuing an American History MPhil at Cambridge starting this Autumn.
View all posts by Emilie Cunning →
Tagged  Domesticity, Sitcoms, U.S Television and Nostalgia Special Series, WandaVision.
Bookmark the permalink.