“The Only Way Forward Is Back” – Nostalgia, Grief and Television in WandaVision 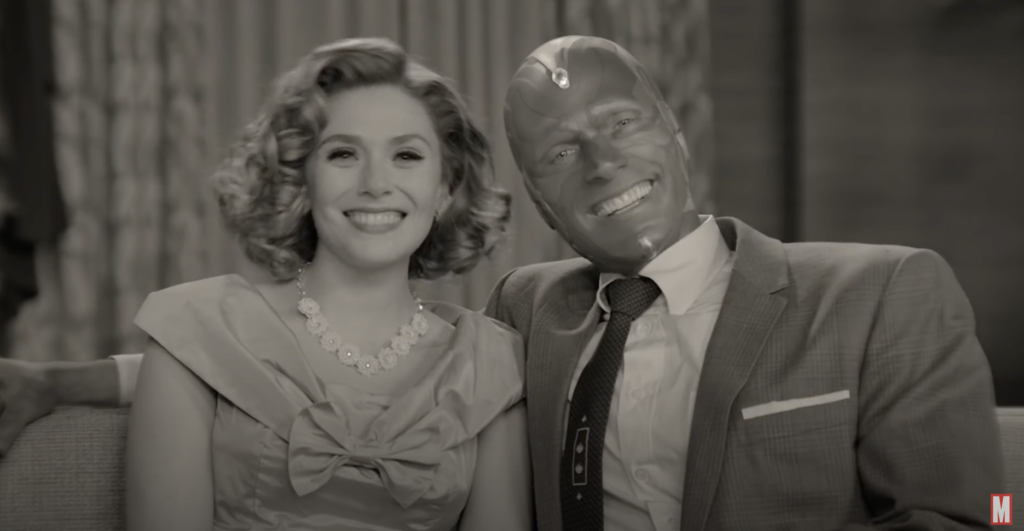 WandaVision, one of the newest installments of the Marvel Cinematic Universe (MCU), abandoned the cinema altogether to bring two of the Avengers, Wanda Maximoff (Elizabeth Olsen) and Vision (Paul Bettany) to the small screen in a 7-episode miniseries airing weekly between January and March 2021 on streaming platform Disney+. The series is set after Vision died at the hands of ubervillain Thanos in Avengers: Infinity War (2018), a fact viewers could not be sure of until several episodes into the series. It opens in medias res, dropping us directly into a world that feels both familiar and unfamiliar at the same time – recognizable to those who are well-versed in American sitcoms, but jarring to those expecting the MCU’s signature superhero fare.

Episode one is shot in black and white, on a 4:3 frame ratio, and in front of a live studio audience, casting Wanda in the role of a zany sitcom housewife reminiscent of Lucille Ball or Mary Tyler Moore. The cookie cutter plot centers on a mix-up that sees Wanda preparing to romance her husband instead of cooking for his new boss, then having to whip up a full dinner on the spot; her magical powers are both a hindrance and an asset, a trope straight out of Bewitched (1964-1972). Episode two gives Paul Bettany space to deliver his best Dick van Dyke, with viewers still none the wiser as to why the characters are seemingly jumping through American television history, one half-hour comedy at a time. Only moments of uncanny “something-isn’t-right” interruptions hint at a larger frame narrative, themselves echoing mystery fare like The Twilight Zone (1959-1964) or The X-Files (1993-2002).

Eventually, it becomes clear that Wanda has created this immersive fantasy world for herself and the three-dimensional memory of her deceased partner. Having grown up with American sitcoms herself as a child in war-ridden fictional Eastern European Sokovia, these provided welcome respite and escapism for her family. Further, they remind her of a time when her parents and brother were still alive; the parents falling victim to a Stark-manufactured bomb dropping right into the family’s apartment, and her brother Pietro dying at the hand of Ultron’s minions years later (both events crucial to 2015’s Age of Ultron, and thus Wanda’s origin story as a villain-turned-superhero). Unable to cope with more loss, Wanda thus immerses herself in the sitcom genre’s idealized world of nuclear families and picket fences, a world where at the end of every episode, every issue is solved and relationships are loving and intact.

Every time there is an intrusion of some kind (usually government agency S.W.O.R.D. trying to break her illusion), Wanda escapes to a different setting. She recreates popular sitcoms from every decade until the late 2000s, complete with the questionable hair and fashion styles of the late ‘80s à la Full House (1987-1995) – the show that made famous the lead actress’ sisters – and the frantic pace of Malcolm in the Middle (2000-2006). WandaVision excels at recreating these shifts in televisual history, especially in the opening credit sequences with spot-on theme songs (by composer duo Kristen Anderson-Lopez and Robert Lopez). As slowly becomes clear, these are also not just a gimmick, but integral to the protagonist’s narrative journey: as they guide us through television history, they guide Wanda through her grief. Each episode echoes one of the famed stages of the Kübler-Ross model:[i] if the 1950s are denial, with their whitewashing and strive for conformity, then the later 2000s, with their fable for the meta and the ironic, are depression.

The show’s time of release likely contributed to its staggering viewer numbers, offering an escape from the COVID-19 pandemic through the gripping portrayal of Wanda’s grief.[ii] Her own respite in television also echoed many a fan’s televisual viewing habits during lockdown, as binge watching has become a key coping mechanism for many.[iii] Old sitcoms lend themselves especially well to this, they offer neatly tied up narratives, and characters that become part of our family – a function they have filled since the genre’s infancy in the 1950s. They also have the power to take us back to a time of our own childhoods, allowing us to immerse ourselves in nostalgia and the fake promise of a better past, starkly contrasting this past year filled with turmoil. One of the biggest strengths of WandaVision is that it takes such coping strategies seriously, especially examining television as a source of escapism – for both its characters and its viewers. It is not surprising that the line “what is grief, if not love persevering” went viral and eventually turned into a meme, sparking many discussions of the show’s resonance.[iv]

This idea of television, or popular culture generally as a three-dimensional, immersive space to escape to is reminiscent of theme parks like Disneyland, and it comes with the same pitfalls: Disneyland is known for its “architecture of reassurance” and nostalgia-based entertainment, but it is also steeped in whiteness. It is firmly geared at a white, heteronormative middle-class, never having escaped its roots in a 1950s US-America[v] – much like the sitcoms WandaVision references. Their nostalgia, then, is always limited to those who feel included in its past. There is a reason why WandaVision does not revisit Diff’rent Strokes (1978-1985) or The Fresh Prince of Bel Air (1990-1996).

Notably, the show seems to know this, as it does also engage critically with this nostalgia, as much as it is fond of the texts it emulates so uncannily. Wanda can only uphold her all-encompassing vision at the expense of enslaving the whole population of the town she has chosen as her new home. The series’ finale then is morally ambivalent, as Wanda gets away with the harm she has inflicted upon innocent people. She even cruelly punishes Agatha Harkness (Kathryn Hahn), a powerful witch who had interloped in her fantasy world as the “nosy neighbor” – a role she eventually traps her in.

This ambivalent ending is perhaps where we are most reminded that WandaVision was never just going to function on its own, and is in the end bound to the larger logic of the MCU.[vi] Wanda has to be able to move on and evolve in her newfound role as the “Scarlet Witch” of comics past now that Disney is actually allowed to call her that,[vii] and we know she will resurface next in Doctor Strange and the Multiverse of Madness (2022). Her painful goodbye to her lover will also likely not be forever, now that we know that there is a soul of Vision and a body, and it is only a matter of time for them to be reunited.

The MCU’s inability to leave people dead is hurting some of the more profound messages WandaVision had to offer – about grief, about loss, about nostalgia. Perhaps the most powerful statement however is not the one line that went viral, but is a larger message about privilege. When Wanda escapes into her fantasy world and hurts people in the process, it reminds us that escapism can often only come at the cost of others, those who do not have access to it. Wanda’s nostalgia, and in turn our nostalgia for the sitcoms it relives, are steeped in whiteness and heteronormativity – they are viewed through, quite literally, a Disneyfied lens. WandaVision tells us that nostalgia is a privilege. And yet it never fully escapes its own lure.

'Women of Genius': The ‘Revolt from the Village’ in Mary Austin and Willa Cather's Fiction
Research Across Borders - As fragile as a metaphor: Constructing Edna St. Vincent Millay from the Li...
American Studies in Europe Roundup: U.S. Studies Online Special Series

Dr. Sabrina Mittermeier is a postdoc in American cultural history at the University of Kassel, Germany and author of A Cultural History of Disneyland Theme Parks (Intellect 2021), as well as the (co-)editor of Fighting for the Future: Essays on Star Trek: Discovery (Liverpool UP 2020), the forthcoming Fan Phenomena: Disney (Intellect 2022) and The Routledge Handbook to Star Trek (2022) Her second book project deals with “unmade” queer television in the US and Germany. She can be found as @S_Mittermeier on Twitter.
View all posts by Sabrina Mittermeier →
Tagged  Grief, Sitcoms, U.S Television and Nostalgia Special Series, WandaVision.
Bookmark the permalink.