When Mariah met Lutie – Luke Cage, The Street and the cultural capital of TV comic adaptation 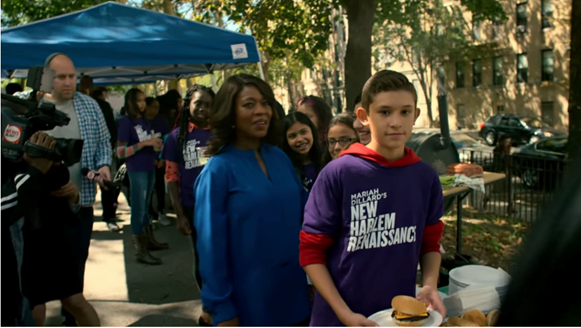 Netflix released the first series of Luke Cage in September 2016 to immediate acclaim. Cheo Hodari Coker, the producer of the Marvel comic adaptation, uses the richness of African American culture to create a hyper-real Harlem as the backdrop for his eponymous hero. Along with one of the best soundtracks of any of the Marvel shows, Luke Cage is replete with visual references to twentieth century Black America, blurring the distinction between the fictional setting of the characters and the actual world of the audience. Luke is more than just a muscle man, and at various points we see him with books; these are usually incidental to the plot but are deliberate additions to the depth of the scenario that presents the viewer with a literary geography of Harlem. Across the two seasons Luke is discovered reading Walter Mosley’s Charcoal Joe (2016) and Little Green (2013), Chester Himes’ The Heat’s On (1966), Ta-Nehisi Coates’ Between the World and Me (2015),[i] and perhaps most symbolically Ralph Ellison’s Invisible Man (1952). The TV show uses this cultural capital to enhance the viewer’s suspension of disbelief, blending the comic world with literary references to encourage an engagement with the characters through the recognition of these subtextual visual cues.

The plot of the first series revolves around Luke’s attempts to clean up Harlem whilst trying to come to terms with his newly acquired super strength, a memento of his wrongful incarceration in Seabrook penitentiary. He finds Harlem in the hands of Cornell ‘Cottonmouth’ Stokes and Mariah Dillard/Stokes, cousins who have carved up power between them, Cottonmouth as the boss of a criminal gang and Mariah as an aspiring politician.  Most of the academic engagement with the show has focussed on Luke,[ii] seeming to reinforce the point bell hooks made in 1981 that “Black women had been asked to fade into the background – to allow the spotlight to shine solely on black men.”[iii] However, Coker does engage with the challenge of hooks, and the Harlem he and his production team create is populated by a range of powerful women. One of the most central figures of the narrative is Mariah Stokes; if we shift our gaze in her direction it becomes apparent that she is as immersed within cultural iconography as Luke.

We meet Mariah, played wonderfully by Alfre Woodard, as she is out on the campaign trail. Whilst we watch her perform for the news crews following her, we learn that her big community project takes its name from the Harlem Renaissance, the creative outpouring which centred in the real Harlem of the early twentieth century. The writers play with this marker – it could just be the name of a fictional character’s political showpiece, but the majority of viewers will recognise it as more than that. By referencing this cultural moment, a show which is ostensibly about gang violence and intrigue can go beyond its plot to highlight the ongoing importance of Marcus Garvey, Billie Holliday, Langston Hughes, Zora Neale Hurston amongst many others. Mariah is immediately associated with the richness of this heritage even if she is using it for her own gain. She does not have to walk around with a copy of Their Eyes Were Watching God for the point to be made. There is a subtlety to the televisual process that allows for such stratification of cultural cues beneath the surface of the plot, going beyond what is possible within the two-dimensional framing of the comic form.

Such peripheral referencing is taken to another level in the show with the parallels between Mariah Stokes and Lutie Johnson, the heroine of The Street, a novel by Ann Petry. Today Petry has been somewhat eclipsed by other members of the Harlem Renaissance, relatively overlooked today by general readers and critics alike, but The Street was a best seller when it was published in 1946. It tells the story of Lutie and her struggles as a single mother to raise her son, Bub, on 116th Street in Harlem, caught as she is between the unwanted attention of Junto, the local empresario, and Boots Smith, his enforcer. Petry is relentless in her depiction of the difficulties facing Lutie and embraces environmental determinism as she lays bare the structural racism of 1940s America.

All Lutie wants is to be respectable, and to earn enough money to keep herself and Bub safe, but she meets insurmountable resistance from societal structures designed to limit her opportunities. “Sure, Lutie thought, as she walked on, if you live on this damn street you’re supposed to want to earn a little extra money sleeping around nights.”[iv] Despite the intervening seventy years, Mariah faces similar difficulties on the streets of Harlem. Even with a college education which was beyond the aspirations of Petry’s heroine, and relative financial security, Mariah is ultimately trapped by the inexorable pull of the street – she cannot escape the violence any more than Lutie could. Her family’s position was established by Mama Mabel, Mariah’s notorious grandmother who ran the neighbourhood for good and ill, much like Petry’s character, Mrs Hedges, the madam who lives in Lutie’s building. Mariah’s family wealth is based on prostitution, presenting us with the path Lutie refused to follow and realising the fears of Petry’s novel in the ongoing prevalence of the sex trade.

Every time Lutie attempts to better her position some unintended consequence pulls her backwards. When she takes in foster children her father’s drunkenness results in them being removed; when she gets a job in a country house her husband has an affair; when she finds her own apartment there is no one to keep Bub out of trouble whilst she’s at work. In the same way Mariah tries to make a difference for her community, but all her efforts are similarly thwarted. In a complicated discourse, her evident pride in her heritage when she declares “Black women have always had super-powers” (S2E5) is tempered by a graphic exploration of the limits of those powers when her new community clinic is despoiled by intergang horror in the same episode. 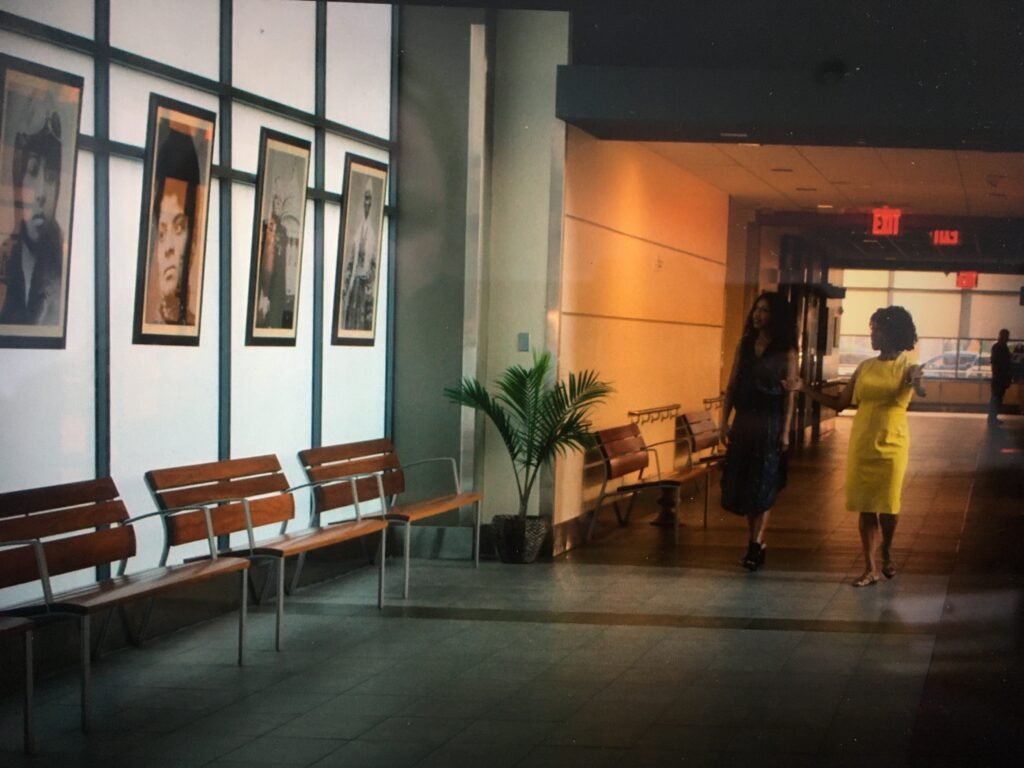 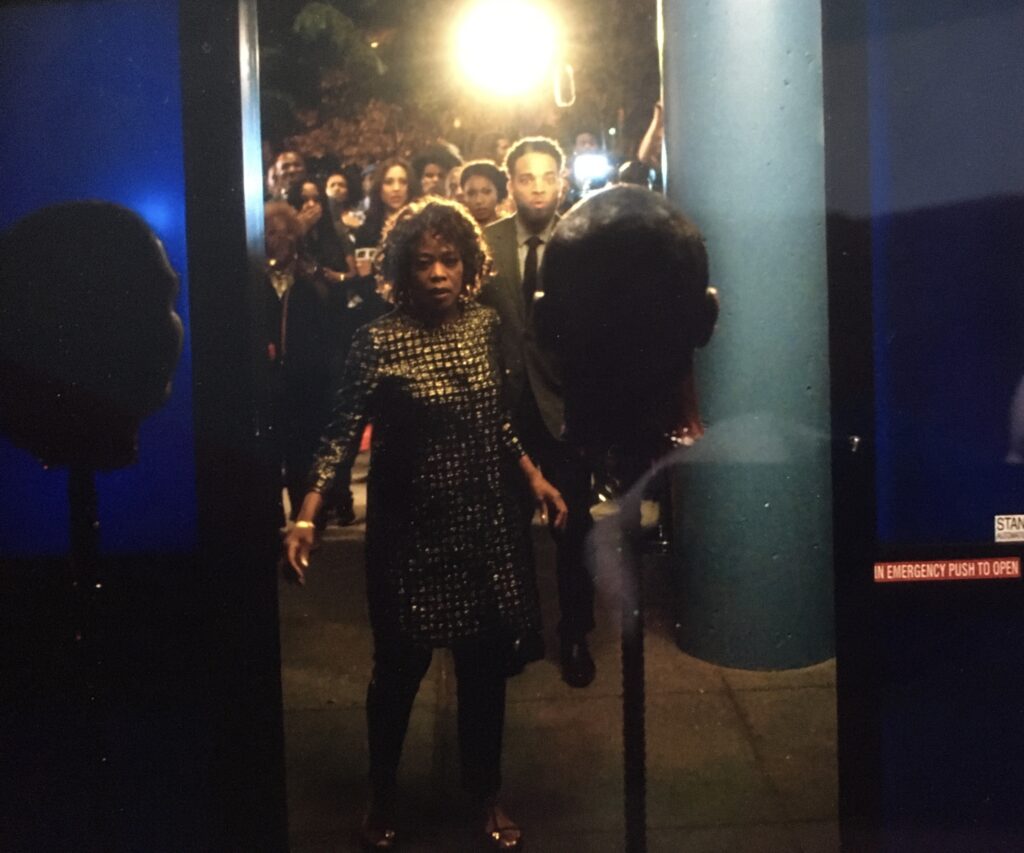 But the grand opening is filled with death (S2E5)

Having shown her daughter around the clinical space, in line with her motto of “Family first, always”, Mariah’s grand opening for the press and local dignitaries is undermined in brutal fashion by the discovery of a trio of disembodied heads behind her. The juxtaposition between the head shots of famous African American women in the hallway and the decapitated gangsters in the foyer is a powerful device, highlighting a tension between female creativity and masculine violence whilst recalling Petry’s loosely fictionalised accounts of trauma on the streets, where girls end up with their faces similarly “Cut to ribbons!”[v] This moment that should have been triumphant for Mariah, when she is surrounded by cultural scaffolding and closest to actually benefitting her community, is taken from her, replicating the pattern of frustrated good intentions which beset Lutie.

The starkest moment of intertextuality between Lutie and Mariah comes at a climactic moment of brutality in episode seven, series one, written by Akela Cooper. The parallels between the TV scene and the novel are striking. Boots Smith and Cottonmouth are both pianists turned gangster, Lutie and Mariah are both enraged by sexual offense, and they both hit their assailant on the head with a heavy object before beating them to a bloody pulp. The violence of the scene is startling; women who kill are still relatively rare on television and it is extremely unusual for a woman to use blunt force against her victim[vi]. As Mariah hits Cottonmouth she echoes Lutie, lifting her pathology off the page and onto the screen as she swings the mic stand, tracing the same arc that caves in Boots Smith’s face; “she struck him on the side of the head before he saw the blow coming…A lifetime of pent-up resentment went into the blows.”[vii] 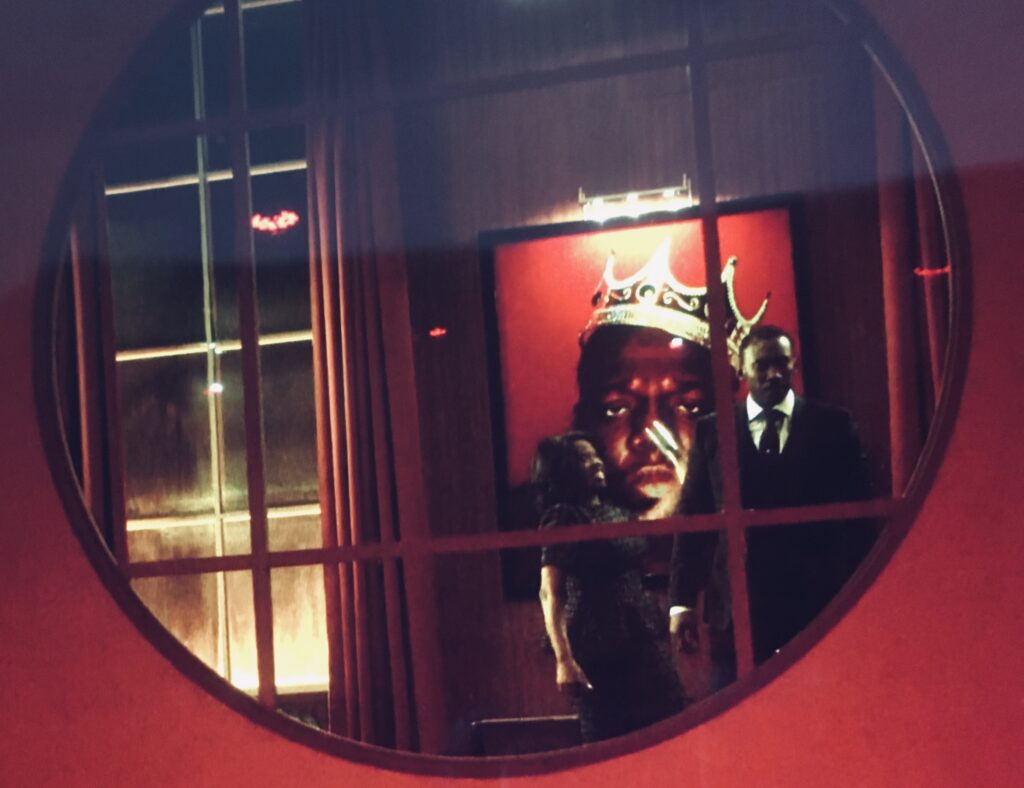 Netflix: Mariah hits Cottonmouth over the head before beating him with a mic stand (S1E7)

In the aftermath of the very real violence the world witnessed in America last year, Netflix now has Luke Cage badged as its top show in a Black Lives Matter collection, bringing it to the attention of an even wider audience beyond its Marvel fanbase. The visual references to cultural capital that imbue the show give it a gravitas which its comic book origins might belie. But, as Darin Jensen notes in his discussion of the significance of comics, “Comics are an attempt to narrate, explain, and order culture and subjects.”[viii] The televisual conversation between Mariah and Lutie makes good this attempt, highlighting the tragedy that Petry’s message about racial and gender inequality remains so relevant today.

[i] For more examples of ‘Books as seen in films and tv series’ go to The Screen Library https://veryslowreader.tumblr.com/search/

Deborah Snow Molloy is an American Literature PhD student at the University of Glasgow. She is researching the relationship between the New York environment and the mental state of female characters in women's literature. Deborah's wider interests are in literary geography, medical humanities and early twentieth century American women's fiction. For more information on Deborah's research, you can visit her researcher profile(https://www.gla.ac.uk/schools/critical/postgrad/currentpgs/deborahmolloy/) or follow her on twitter @snowmolloy.
View all posts by Deborah Snow Molloy →
Tagged  Ann Petry, Black America, Luke Cage, U.S Television and Nostalgia Special Series.
Bookmark the permalink.