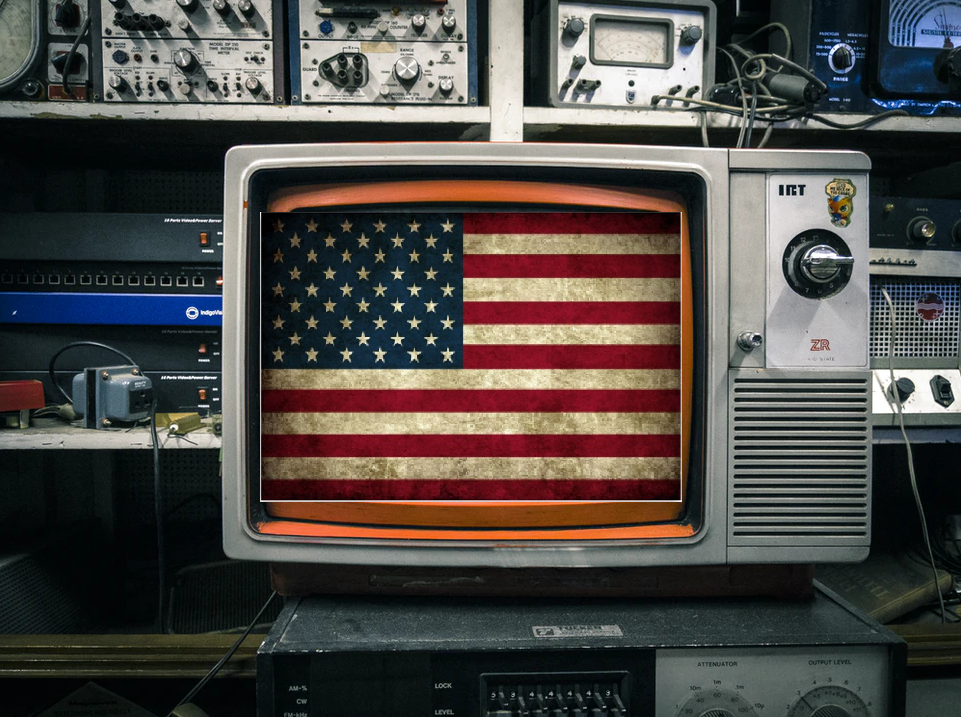 The ubiquity of television has been written about extensively in both scholarship and popular writing; ever since the first commercial sets began replacing the hearth as the centrepiece of any American living area, television has dominated how we write and think about the United States. In 2020, a time unlike any other in recent memory, more people than ever stayed indoors with the television on, streaming platforms open, and consumed entertainment insatiably. Was it comfort and nostalgia for a pre-pandemic time that saw record viewing figures? A distraction from the uncertainty of the present? Or, simply, that more entertainment is being produced than ever and to stay afloat and abreast of popular culture one has to consume quicker than ever before?

This USSO Special Series brings together 10 scholars and their respective research into the televisual landscape of America both past and present, examining how nostalgia, revisionism, and other ideological exports have been weaponized and subverted on the small screen. Opening the series is Aanchal Vij’s piece on Watchmen and Hunters, two popular recent TV shows which offer an alternative / revised history of twentieth-century America, and she asks what this means for audiences who are witnessing renewed narratives of American exceptionalism and idealisation. Her conclusion that a common longing exists in audiences to ‘repair’ history, or to imagine alternative histories and futures simultaneously, marks television’s power as a nostalgic medium.

Following this is Deborah Snow Molloy’s article which investigates the cultural capital within the TV adaptation of Marvel’s Luke Cage. Drawing out the importance of literary and cultural references within the show, she details how these contribute to a depiction of Harlem that is informed by the legacy of many Black American artists, writers, and activists. Snow Molloy makes connections between Luke Cage and Ann Petry’s novel The Street in a further effort to emphasise this legacy, pairing together the central female characters in a discussion of female resilience, masculine violence, and cultural trauma.

Catherine Martin then turns our attention to postwar American Radio in a study of how audience complaints shaped Radio programming and contributed to the standards for the emerging medium of Television. Martin’s review of 244 complaint letters shows predominantly female voices arguing against sensationalist and violent narratives, appealing to a sense of morals in order to protect listeners from this corrupting noise. These criticisms influenced the writing of the Television Code, which imposed moral guidelines and entrenched white conservative values into programming standards continuing to this day.

Bringing our series right up-to-date, Sabrina Mittermeier then writes about the 2021 series WandaVision, one of the newest additions to the ever-expanding Marvel Cinematic Universe. Mittermeier’s article focuses on the relationship between television and nostalgia in the series, pointing to the show’s self-conscious imitation of famous American Sitcoms from the 1950s to 2010s. Her article notes the escapism attached to these sitcoms for both the viewer and for WandaVision itself, but further notes the privilege and whiteness that this escapism is often steeped in, providing a limited American History in its imitation of selected sitcoms.

Emilie Cunning continues our series’ fascination with WandaVision, providing an analysis of depictions of female domesticity in the TV show as mirroring the changing role of women in American society. Cunning’s article considers how the sitcom trope of the series signals the domestic ideal of each referenced period, and charts the increasing freedoms and equalities for women gained over time. This idea is complicated by Wanda’s use of these sitcoms and domestic roles as a coping mechanism, able to move between eras with an oversimplified ease and speed, pointing to the illusory nature of sitcoms which erases the complications of history.

Segueing to a different Disney intellectual property, Aidan Dolby’s work on The Mandalorian considers how the storied Western genre has shaped U.S televisual production, taking multiple cues from John Wayne’s oeveure to Clint Eastwood’s iconic Man With No Name so as to conclude how this latest small-screen Star Wars outing marks a new era for the Western on television. Through analysis of the show’s sartorial designs to the mannerisms of its central bounty hunter, Dolby examines how nostalgia and fandom can converge across multiple genres, franchises, and temporalities. The resulting article focalises discussions of stylistic tradition and lineage through this latest addition of the (space) Western canon.

Next, Fraser Hammond’s article considers the use of music in TV show Quantum Leap as a simplified cultural signifier. Using postmodern theory to underline his argument, Hammond considers how popular music in the television show is used as a shorthand for history shorn of any radical cultural context, akin to Jameson’s idea of the flattening of history within postmodernism. Hammond analyses moments from selected episodes of Quantum Leap in order to demonstrate how key contexts such as race and historical accuracy are erased from consideration and replaced by a ‘jukebox nostalgia’ for a generic past.

Embracing sitcom spiritedness and goodwill, Lewis Kellett looks at recent cult favourite Ted Lasso and its unique approach to positivity and compassion. Kellett considers the archetypal ‘fish out of water’ trope in the U.S sitcom history, with comparisons to The Office and M*A*S*H informing his appraisal of Ted Lasso’s eponymous protagonist as a fresh take on a stock sitcom template.

In our penultimate piece, Briac Picart Hellec considers the complex legacy of Twin Peaks and Twin Peaks: The Return, two shows in which cult fandom, audience expectation, and autership collide so potently that debates concerning television-as-cinema are now a mainstay in critical discourse. Hellec considers the shifting tones of David Lynch and Mark Frost’s magnum opus and how fan expectation was undercut and subverted in the show’s landmark third season, arguing that the noticeably changed atmosphere and mood of The Return was a product of far more than the passing of time.

Bringing our series to an end is Laura C. Brown’s fascinating piece on the phenomena of 24/7 streams. The ahistoric nature of these all-pervasive streams is considered through the case-study of The Johnny Carson Show and it’s stream on Pluto TV, examining how its ambient ubiquity speaks to wider issues of nostalgia, comfort, and revisionism in the contemporary American audience. Brown provocatively asks what becomes of historically specific media when it is removed from its original context, and how nostalgia can continually reinvent such cultural productions.

Series co-edited by Will Carroll and Mairi Power.