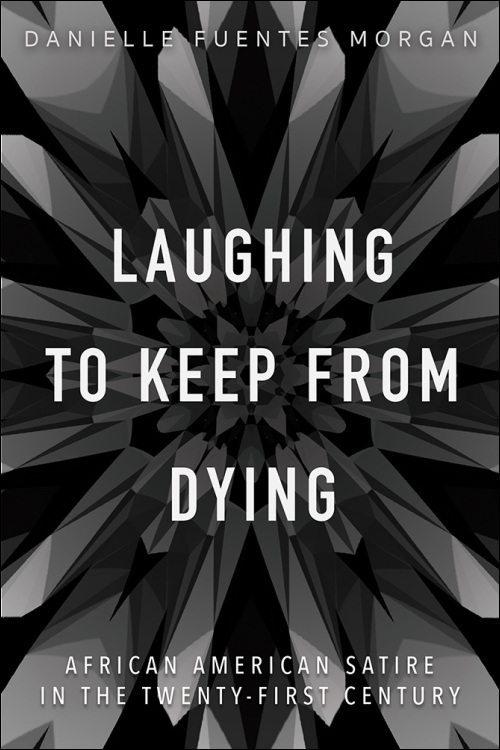 Laughing to Keep From Dying centres its discussion on the ways satire enables a social commentary which illustrates the power of Black selfhood; satire becomes a new form of social justice. (2) The texts discussed in this book ‘reveal critical anxieties about race and critique the irrationality of racialization’. (3) This critique draws attention to the mistreatment of African Americans and initiates a discourse about racial inequality in America. Thus, this book discusses how satire is an African American form of expression which allows the discussion of race in the twenty-first century and challenges racial hierarchies. This cultural production of satire allows the performance of racial identity by blurring the lines between the real and the imagined.

The main argument of Fuentes Morgan’s book is based on the theory of the Sankofa bird, native to the Akan tribe in Ghana, and known for the saying ‘go back and get it’ which symbolises that answers lie in the past. In this context, the Sankofa philosophy shows how we need to understand the way satire was used in the past to understand its use in the present. Therefore, this book uses neo-slave satire to illustrate how the imagery of slavery in the twenty-first century satire leads to a form of justice as it ‘engages the context of continued racism and racialization through the figure of the slave’. (28) Thus, Danielle Fuentes Morgan expresses her interest in analysing how satire – since the period of slavery – echoes across generations and is a crucial revolutionary means of expression which prevented a psychic death; emotional release through humour/irony. This form of satire is also recorded in Daryl Cumber Dance’s folklore collection From My People: 400 Years of African American Folklore where tales like ‘Why De Black Man’s Hair is Nappy’ and ‘Why De Whites Got Everything’ show how the enslaved unconsciously incorporated satire in their tales as a way to protest and resist claims of their alleged biological inferiority.

Fuentes Morgan further develops the genre by highlighting the continued importance of this form of satire, showing how slavery is at the core of African American satire. Like the enslaved, African Americans employ laughter to cope with a system that has been wired against them for centuries. Fuentes Morgan names this combination of laughter inspired by satire a kaleidoscopic Blackness or ‘the multiple autonomous ways of being Black’. (3) Through satire, African Americans are able to access a method which allows them to communicate their emotions towards racial injustice to their audience: satire takes on a therapeutic function. Thus, this book succinctly demonstrates how satire inspires a type of laughter which leads to a political discourse that can be applied to the current racial justice movement. Neo-slave satire allows comedians and their audience to connect with the antebellum period and critique the current treatment and portrayal of African Americans in the hopes to inspire change and acceptance.

The four chapters in this book demonstrate how satire leads to a cultural understanding of the African American experience, especially the satire used by the enslaved (Chapter One); similarly, this aids the illustration of the humanity of African Americans when framed against white supremacy and systemic racism (Chapter Two). Moreover, this book also focuses on satiric misfires of comedians (Dave Chapelle, Leslie Jones) and how they use satire as a form of cultural commentary which reclaims negative tropes of Blackness (Chapter Three). Fuentes Morgan closes the main discussion of this book with her fourth chapter which compares two popular genres: horror (Get Out, 2017) and comedy (Insecure, 2016). These chapters ‘reject preeminent contemporary ideologies of the post-racial as a safe space for identity formation of the post-Black as a required sphere for fruitful identity performance’. (123) In other words, this book illustrates how satire leads to a new form of identity formation and performance which creates a racial identity that embraces the past – through neo-slave satire – to bring changes to the present. Fuentes Morgan effectively embraces the philosophy of Sankofa to show how the past continues to be relevant in the present.

This book puts satire at the forefront by showing how the genre has been transformed into a tool to critique the portrayal and treatment of African Americans. Recent scholarship in black satire shows how this genre also emphasises the hardships of the African American community. For example, Lisa A. Guerrero’s Crazy Funny: Popular Black Satire and the Method of Madness (2019) uses satire to accentuate how the African American community copes with racism and mental health issues. Through a multidisciplinary approach – literature, comedy, theatre, and film – this book, and other works of satire, demonstrate the evolution and importance of African American satire. The main contention of this book, then, is to focus ‘on why race, racialization, and racism so frequently continue to form the basis of satirical readings in the twenty-first century in both fictional and non- fictional events’. (6) This form of social commentary draws on laughter to illustrate a collective history and methods of survival when faced with systemic racism. The trajectory between satire and enslaved humour continues to inspire many as can be seen in diverse works such as How to Rent a Negro (2005), Django Unchained (2012), and in Laughing Fit to Kill: Black Humour in the Fictions of Slavery (2008). Laughing to Keep From Dying focuses on how laughter can be a crucial means to racial discourse as a way to inspire change and acceptance. Fuentes Morgan puts emphasis on satire to illustrate how laughter can lead to survival and resistance; two things that are currently needed in the African American community.

Book Review: South Side Girls: Growing Up in the Great Migration by Marcia Chatelain
Book Review: Falling After 9/11: Crisis in American Art and Literature by Aimee Pozorski
Book Review: 'Hattiesburg, An American City in Black and White' by William Sturkey

Dr Jennifer dos Reis dos Santos was born in Luxembourg and is proud to represent her West African heritage in her research and writing. She has recently completed her doctoral degree at the Department of English and Creative Writing in Aberystwyth University, Wales. Her doctoral degree focuses on how African American folklore is a means of recording culture and history. Other research interest are African American literature and postcolonial theory. She is an enthusiastic writer and has previously published an article about her research in The Conversation.
View all posts by Jennifer Dos Reis Dos Santos →
Tagged  Book Review.
Bookmark the permalink.