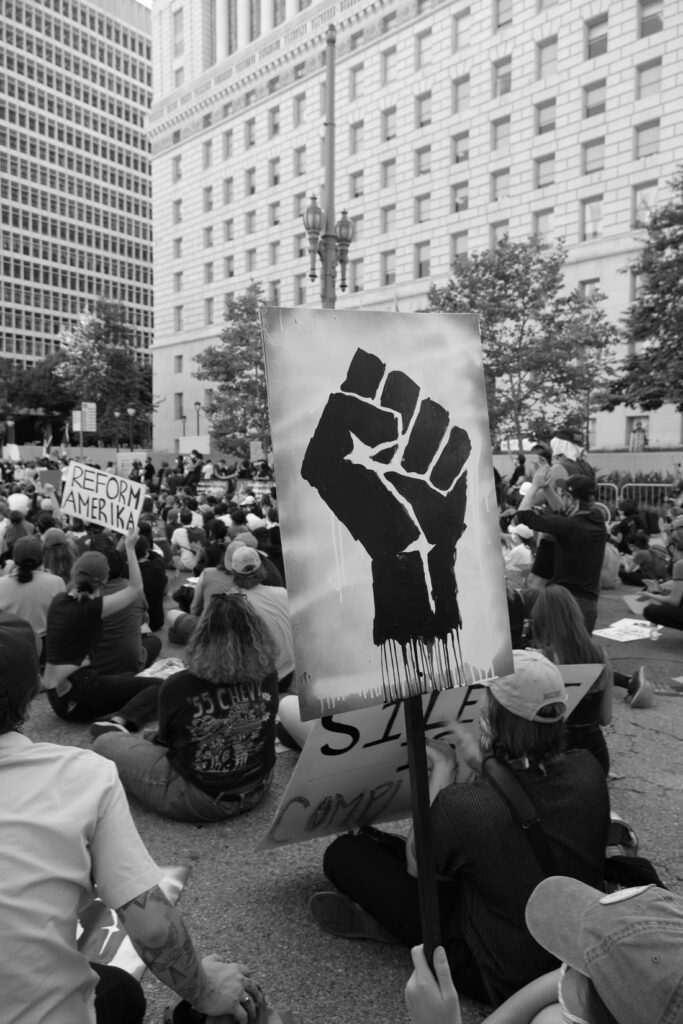 On July 24 2015, around 500 advocacy groups representing African American communities from all over the country met in a three-day conference at Cleveland State University to deliberate on the creation of a unified political front. Outside the conference facilities, demonstrators shouted slogans decrying what they perceived as deliberate institutional indifference to the plight of their communities in face of the dramatic upsurge of anti-Black racism, police brutality and violence committed by white supremacist groups. The slogans echoed in essence those raised the year before in what historians now call the “Ferguson unrest” in reference to the riots which broke out in two waves over the next four months following the death of 18-year old Michael Brown. The effervescent crowd fuelled further enthusiasm for the participants at the CSU conference who were by now intent on launching a political resistance platform to translate the slogans that had for long remained inconsequential into concrete militant action.

The Cleveland event came down in history as an additional hallmark of the ability of African Americans to come together in splinter (civil rights) groups and yet remain ideologically unified. It heralded the birth of the Movement for Black Lives (M4BL) which today represents the interests of no less than 500 organizations articulating the grievances and aspirations of a large segment of the community. Its agenda (or “policy table”) comprises next to thirty policy guidelines aimed at promoting the well-being of the African American community, roughly falling in six broadly defined demands: an end to “the war on blacks,” compensation for past injustice, investment in the public sector, promotion of social justice, support for community-level decision-making, and empowerment of Black organizations and associations. Highly active Black grassroots organizations and collectives such as Black Lives Matter (BLM), Color of Change, and the Freedom Road Socialist Organization (FRSO) either support M4BL or are part of the coalition.

In their mission statement, M4BL argue that the underlying rationale behind the creation of the coalition is the conviction that mainstream democratic institutions, despite the existence of a battery of significant reform legislation, have failed to promote social justice and equal opportunity for large sections of the African American community, including women and transgender people. In their own words, they are:

Black people from all walks of life – young, elder, queer, cis, trans, differently abled. [They] have come together in the rich tradition of [their] ancestors to imagine new ways forward for [their] liberation. [They] are dreamers and doers knowing that [their] work draws on the best of [their] history but must go beyond it to forge a fierce, free and beautiful future together that [they] can only imagine into reality.1

The distinctly essentialist overtones of this declaration of intents clearly supersede the possibility for a coercive Universalist agenda. For the Movement for Black Lives identifies itself as an all-Black network of organizations, a coalition which “recognizes” the richly resourced legacy of the “ancestors,” committing itself to the “liberation” of the Black community by forging a “fierce” future. In light of this Afrocentric perspective, “the best” in Black history could in fact be the narrative product of a deliberate displacement of white Anglo-Protestant cultural heritage and a reclaiming of centrality at the core of a new hierarchy, a fictive social ecology where Blackness is rewarded for its redemptive role. 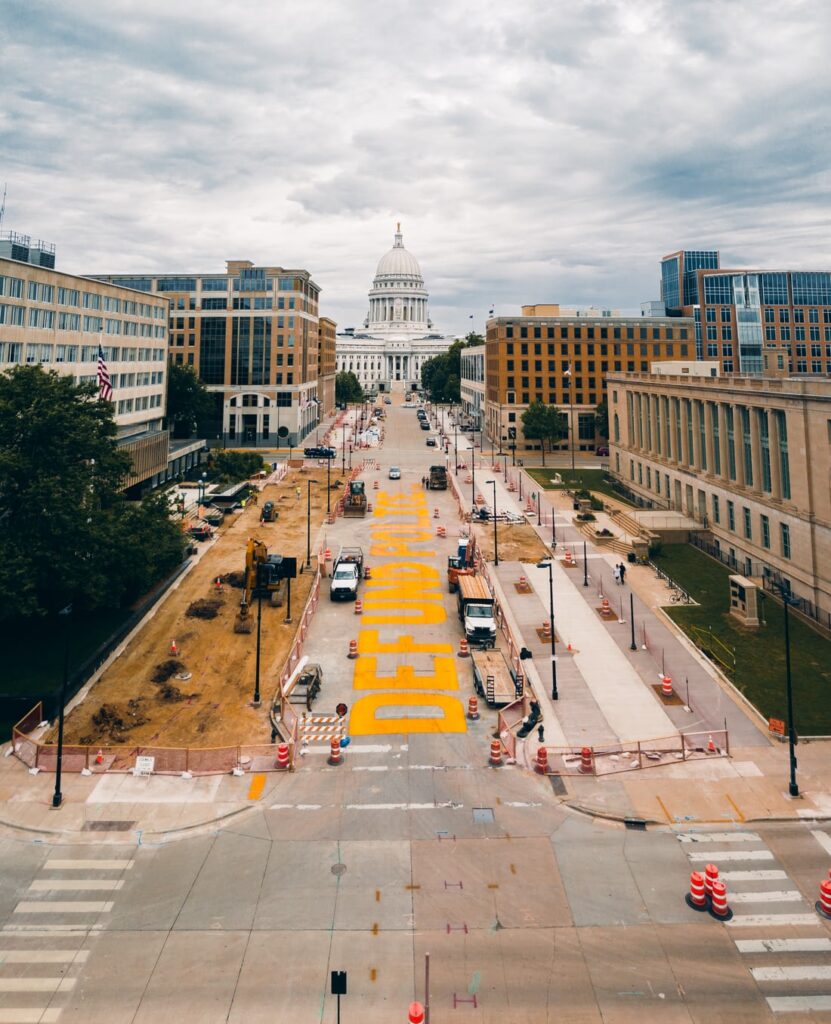 A few lines further down the mission statement, the listing of African American grievances . Expressing disillusionment with political inertia, and more specifically with the government’s failure to deal competently with the systematic transgressions of the constitutional provisions of life and justice for all citizens that are often committed by the representatives of the system, the statement develops a  critical stance against the state itself as when it argues that:

[blacks] know all too well that the reforms that have passed at the local and state level do not address the root causes of the killing, dehumanization, and torture of [black] people. Instead, many increase police budgets and diagnoses the problem as one of “implicit bias” or “bad apples.” At best these are band aids on gaping bullet wounds, and at worse they are interventions that simply increase corporate and state power and make it easier for the state to devalue and destroy [black] communities.2

The use of an accusatory rhetoric against the government for allegedly conspiring to annihilate African Americans is reminiscent of Black Power organizations and their discursive tactics of resistance.It is also a solid reminder that advocacy for African American separateness is still attractive to a sizeable section of the community. The movement’s “centeredness” and “rootedness” in Black communities and its avowal to achieve “collective liberation” invoke Black Power’s privileging of a resistance strategy anchored in the doctrine of black nationhood.

More significantly, however, it resuscitates the conflictual atmosphere of the civil rights era during which sizeable African American communities were enthused   over the  unconditional commitment of well-meaning idealist leaders to a new integrationist discourse that would redress the many biases of white Universalism. As the nation commemorated in 2018 the fiftieth anniversary of Martin Luther King Jr’s assassination, the Integrationist philosophy of this great African American civil rights leader was reexamined through the lens of a number of race scholars who start to  reconsider the widely shared belief that he was a resolute advocate of  the Integrationist discourse of the time. Basing their revisions on passages from Where Do We Go From Here? (1967),3 critics of the traditionalist representation of King as an unconditional Integrationist promote the idea that, a few years before his assassination, he started to lose faith in the ability of American democratic institutions to ensure racial justice. The book is today a recommended reading in many universities across the United States and has been acclaimed as a manifesto against poverty regardless of race and ethnicity. And yet, there are passages that suggest disillusionment with the Integrationist discourse of white society as, to use Eddie S. Glaude, Jr., a “charitable enterprise” for white people to “do good” to Blacks. In King’s own words,

Negroes have proceeded from a premise that equality means what it says, and they have taken white Americans at their word when they talked of it as an objective. But most whites in America … proceed from a premise that equality is a loose expression for improvement. White America is not even psychologically organized to close the gap–essentially it seeks only to make it less painful and less obvious but in most respects to retain it.4

Rethinking the Integrationist approach to racial equality should be considered a legitimate (but also recommendable) undertaking as parity in income, employment, and educational opportunity continues to be a deferred dream in this early  twenty-first century. King’s occasional outbursts regarding his personal disillusionment with the ostensibly progressive intentions of white society is suggestive of what could be referred to as an American dilemma, to paraphrase Gunner Myrdal.5 The second part of King’s book title, ‘Community or Chaos’, is a portentous indication of Integrationism’s vulnerability as a mainstream ideology, while the rise of M4BL could in this vein be considered as an expression of the recent racial crisis as reflected by the recurrence of violent race riots, the latest of which being those following the George Floyd murder.

Sami C. Nighaoui holds a PhD in English language and literature from the Faculty of Arts and Humanities in Manouba, Tunis. He is a Steinhardt School of Education (NYU, 2004) alumnus and holder of a diploma in educational leadership from the United States Department of State (Washington, DC, 2006). He co-founded the American Studies Research Group at the American Cultural Center in Tunis and the Research Group on Prejudicial Narratives at the Faculty of Letters and Human Sciences in Kairouan, Tunisia. He served as Director of the English Master’s Program at the same faculty from 2014 to 2017. He currently teaches American Studies at Carthage University, Tunis. He is author of several articles on race relations in the United States, recently published a book on the African American liberal integrationist experience and edited two volumes on post-disciplinarity and deminoritisation.
View all posts by Sami Nighaoui →
Tagged  Black Lives Matter, Black Power, Civil Rights.
Bookmark the permalink.