Book Review: The Sum of Our Dreams by Louis Masur 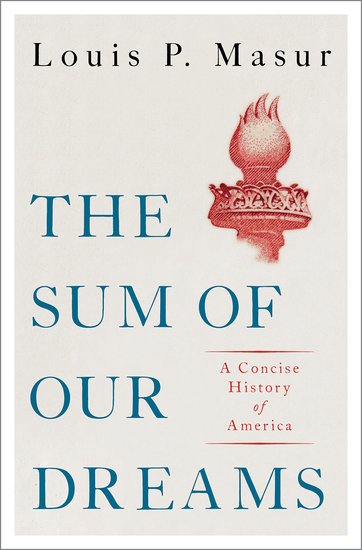 Louis P. Masur’s three-hundred-something page history of the United States is positioned as an introductory text, ‘a foundation of knowledge’ (xvii). All the familiar faces put in an appearance, from John Smith to Frederick Douglass; Horatio Alger to Martin Luther King Jr. Masur quotes Benjamin Franklin on death and taxes, Neil Armstrong on small steps and great leaps, and Gordon Gekko on the goodness of greed. He lingers on the Founding Fathers, on Lincoln, on the two Roosevelts, on Nixon, on Trump. In the four hundred and thirty years this book covers, the only women who receive more than passing mention are Harriet Beecher Stowe and Hilary Rodham Clinton. In short, very little information is given that will be unfamiliar to high school students in America, if not middle school students, and we must assume the book’s target readers are instead first-year undergraduates in the UK and Australasia, along with the general public.

The first question is whether there is anything to distinguish this from numerous potted histories already in circulation, of which the best is probably Hugh Brogan’s Penguin History of the United States (2001, second edition), although this has the advantage of being more than twice as long. Masur announces at the outset that his intention is to portray the gap between the ideals and realities of America; an approach that is hardly novel. Some attempt is made to shape a more ‘inclusive’ history – witness the epigraph from James Baldwin – but this, too, is nothing new, and in any case remains largely gestural. Not a word is written about modern Native American politics, for example, but three sentences are devoted to Marlon Brando’s protest at the 1973 Oscars. Ultimately, though, any attempt to write a history that is concise, comprehensive, and original is perhaps doomed to failure. In effect, the historian is compiling a greatest hits album: something must be changed to justify the new compilation, but at the same time none of the famous songs can be excluded. There is almost no room for innovation.

The second question, then, is whether Masur’s book is more suitable than its competitors as a guide for beginners to US history. For the most part, it is no worse. All the key episodes are included, even if the amount of attention each receives is variable. The Bay of Pigs, the Cuban Missile Crisis, and the space race are dealt with briskly in two consecutive paragraphs, whereas the 2016 presidential election takes up ten. Snoop Dogg is quoted, the Dixie Chicks get a mention, but close to nothing is said about blues and jazz. Such unevenness is arguably impossible to avoid in a work this length, however.

Less easily forgivable, given the book’s prestigious publisher, is what sometimes feels like rushed editing, particularly in the final chapters. There are several typos, at least once an initialism is bungled (‘AIF’ rather than AIG, 287), and it is not always clear whether a viewpoint belongs to an historical protagonist or the author himself (see, for instance, discussions of the end of the Cold War, 271, and terrorism, 279). More critically, the organisation of the text is not always clear. Occasionally this is simply the result of sloppy editing. We are told Jesse Owens won four gold medals in the 1936 Olympics, and then, in parentheses, informed that ‘Jewish athletes were not allowed to participate’ (197). If Nazi anti-Semitism has any direct relevance in a paragraph dealing with the struggles of African Americans, it is not explained. The larger problem is structural, though. Each chapter deals with two or three decades, is subdivided by theme, and begins with a stand-alone paragraph introducing a key figure from the period. This often takes us back and forth in time, so that, Pulp Fiction-style, some figures are killed off only to be resurrected again. Readers unfamiliar with the field may find the effect confusing.

The title of Masur’s book comes from a speech made by Barack Obama in 2007, and the former president is quoted more often and at greater length than anyone else. To an extent, he is the guiding spirit here. Like Obama in his own books, Masur writes competently, and comes across as being well intentioned. He aims to please everyone, and is optimistic enough to believe such a feat to be possible. This is no bad thing, and in the greater scheme of things the criticisms listed above are perhaps minor. Certainly, if we compare The Sum of Our Dreams to Philip Jenkins’s supremely uncritical History of the United States (Macmillan, 2017, fifth edition), Masur comes off well. His book is a sincere attempt to achieve a balanced overview – and if we are underwhelmed at the end of it, maybe we have only unrealistic expectations to blame.

Review: Scottish Association for the Study of America Annual Conference
Review: 'American Studies after the Digital Turn'
Review: Border Control: On the Edges of American Art

Conn Redden is a writer and translator. He recently completed an MA in Literary Studies at Goldsmiths, University of London, with a dissertation looking at nineteenth-century US literature.
View all posts by Conn Redden →
Tagged  Book Review.
Bookmark the permalink.