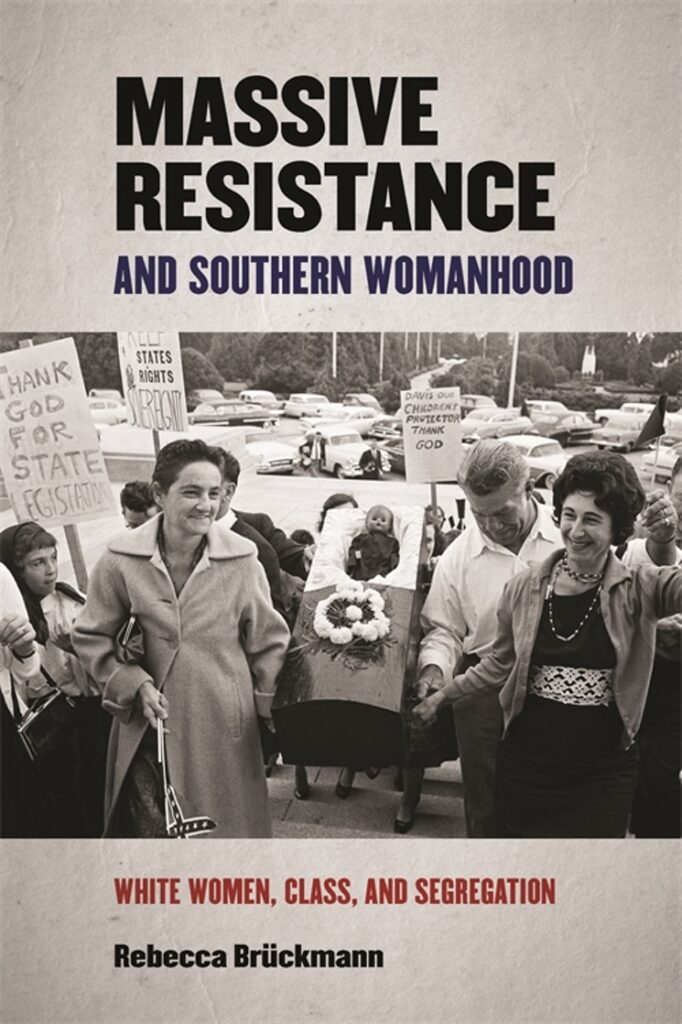 The stereotypical idea of the southern lady, in ‘her silent influence, in her eternal vigil’, was belied by photographs of white women who protested school desegregation by screaming at young Black children.[i] Rebecca Brückmann’s study, Massive Resistance and Southern Womanhood: White Women, Class, and Segregation, is a significant contribution to the growing body of scholarship that shows that white southern women were neither passive nor powerless in their support of segregation. She draws upon a range of media accounts and archives to consider the differences between white working-class women’s massive resistance in Little Rock and New Orleans and that of elite clubwomen in South Carolina during the apex of the classic Civil Rights era. By highlighting class status, Brückmann demonstrates how these distinctions provided different gateways to influence for white women and how this was significant in shaping the nature of their activism.

In the past, historians’ reticence about white women’s advocacy for white supremacy evoked the men’s domination and women’s impotence.[ii] Countering this, recent scholarship reveals how white Southern women maintained white supremacy. Karen L. Cox’s examination of the United Daughters of the Confederacy shows how their public agenda embedded the ‘Lost Cause’ in southern culture and influenced how white women participated in politics. [iii]  This long-standing activism created space for the traditions and eccentricities of older, high status white women in South Carolina to transform the rhetoric of white supremacy into a conservative value. (189) Brückmann’s scholarship extends Elizabeth Gillespie McRae’s work that exposed how white women were central to Jim Crow politics and amplified white supremacist thought through their shared anti-communist rhetoric in conservative circles.[iv] These, like most studies of white conservative women, have concentrated on elite figures. Brückmann breaks new ground by examining massive resistance through the lens of white lower-class women in urban areas within the context of local conditions that, in their view, did not give them all the privileges they were entitled to receive.

This ambitious book scrutinises these movements over an introduction, a background chapter on women’s massive resistance, a chapter for each of the case studies, and a conclusion. Brückmann’s argumentation is nuanced which at times obscures massive resistance’ chronological development. Yet, her attention to the details of how they staked a claim sheds light on issues that often lurk in the background, such as how segregationist religious rhetoric underpinned the urgency of women’s massive resistance by characterising it as a divine test.

Brückmann argues that, across class lines and local differences, white women equated their public duty with maternal authority. White women formed the Mothers’ League of Central High School to prevent school integration in their Little Rock neighbourhood. Like the ironically named New Orleans cheerleaders, in Chapter 3, the League was frustrated at being excluded from the school choices and associations preserved for upper-class mothers. This provoked the League and the cheerleaders to enforce what they considered their rights as white mothers through lawsuits and then by public protest and political action. Women in all these movements ranged in age and included childless single women as well as women with children. White Southern women strategically deployed motherhood, with varying degrees of media and public approval tied to their class status and respectability.

The League linked school desegregation to mixed race sex and miscegenation, which were considered fundamental violations of God’s established order. (48–49) Brückmann argues that the league denounced violence while encouraging it –– bringing high school students into their agitation and ensuring the abuse of Black students during school. They gained political capital by ‘creating crises’ such as spreading rumours of violence by Black students then treated as real by local politicians. (54–56) Brückmann contends that these ‘emergencies’ were a crucial tactic in the repertoire of lower-class women’s massive resistance.

Brückmann shows how these tactics were localised. The League’s public agenda included the desire to accrete social and cultural capital, so members dressed in their Sunday best. By 1960, the Central High crisis abated, and the battle shifted to New Orleans. There, the cheerleaders defied respectability and the developing segregationist strategy to camouflage racism. (88) They escalated their performances to create emergencies by physically attacking Black citizens and threatening white parents who refused to boycott the school with violence until those parents moved. (99, 102)

In contrast, elite clubwomen in South Carolina used their social capital to monitor public education and enforce white supremacy. (154) Unlike the media response to lower-class leaders, journalists regarded clubwoman and prominent segregationist Cornelia Dabney Tucker as an expert on the Supreme Court’s Brown decision, based on her past activism. (164) Over time, status and tradition enabled them to enfold white supremacy into the ‘color-blind’ rhetoric of the conservative movement. (168)

Using three case studies to compare and contrast protest strategies and tactics, Brückmann shows the persistence of white supremacist culture and emphasizes how it is deeply embedded in gender and class expectations. Massive Resistance and Southern Womanhood demonstrates that race, gender, and class analysis combined provides a richer, more complex view of the Civil Rights era and the book is an important addition to scholarship of the segregation era.

[iii] Karen L. Cox, Dixie’s Daughters: The United Daughters of the Confederacy and the Preservation of Confederate Culture (Gainesville: University Press of Florida, 2003).

Carol is a doctoral student in American History at the University of Sussex. Carol's research addresses questions about how white evangelical women used their religious authority to transmit ideas about race and gender through missions abroad, and how they educated white women and children about that experience in the Jim Crow South.
View all posts by Carol Grose →
Tagged  Southern History, Southern Women.
Bookmark the permalink.