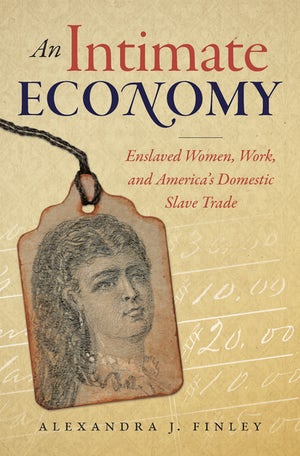 Alexandra J. Finley’s new book, An Intimate Economy, examines the vital role that women played in the US economy in the mid-nineteenth century, focusing primarily on enslaved and formerly enslaved African American women. The majority of that examination is done through the personal histories of African American women who were able to use their economic positions, both whilst enslaved and in freedom, to gain some form of power and independence. Finley’s dedicated approach in reconstructing the lives of the African American women she discusses is aptly summarised in her declaration in the work’s epilogue that ‘I wanted the kinds of stories that they would share with their daughters, their sisters, or their closest friends’ (128). Through her reconstruction of their stories, Finley’s study highlights the vital contributions of those African American women, and women more broadly, to the US economy in the mid-nineteenth century, emphasising how those contributions were often made under the most egregious of circumstances and were not only devalued at the time, but continue to be devalued to this day.

Throughout the text, Finley’s adept analysis teases out the intertwining layers of domestic labour the women performed; from the overtly economic, to the emotional and nurturing, to the often-obscured sexual labour those women were forced or coerced into performing. That analysis is supported by Finley’s consistent application of six key terms, which are defined in the introduction and help keep the themes of the book in clear focus: ‘domestic economy’, ‘household labor’, ‘domestic labor’, ‘emotional labor’, ‘socially reproductive labor’, and ‘sexual economy’. ‘Sexual economy’ is a term that Finley develops from the work of Adrienne Davis in one example of the impressive array of interdisciplinary secondary resources that Finley draws upon, from studies on gender and economics to histories of slavery, including texts by Marisa J. Fuentes, Gerda Lerner, Jennifer L. Morgan, and Friedrich Engels. Scholars with any interest in studying slavery, economics, gender, or race in the nineteenth-century US are sure to discover much they find interesting and that builds upon previous reading.

From the introduction to An Intimate Economy, when Finley briefly traces a day in the life of Silas Omohundro — a slave trader in Richmond, Virginia —in August 1855, her talent for bringing the archives to life is plainly visible. At the moment that money transfers from Omohundro into the hands of Corinna Hinton — one of the enslaved women who are the true focus of the book — Finley’s insightful analysis begins, and she introduces the theoretical ballast to her work. Finley’s evocative choice in framing her text through the real, lived economic situation of Hinton is typical of how her analysis, above all else, aims to do justice to the complex lived experiences of the women she writes about.

The book’s four chapters are each dedicated to the examination of one role that African American women performed in the nineteenth century: Chapter One examines the “Fancy”, Chapter Two the “Seamstress”, Chapter Three the “Concubine”, and Chapter Four the “Housekeeper”. In Chapters One, Three, and Four, Finley focuses on the lives of specific women who performed those roles: Corinna Hinton Omohundro, Sarah Ann Conner, and Lucy Ann Cheatham, respectively. Chapter Two offers an alternative to the format of the other chapters by focusing on a variety of women relied upon by Hector Davis, a Richmond slave trader.

With the introduction of each woman comes Finley’s tangible determination to fully realise the potential of the often scant archival material at her disposal and bring the women discussed to life as best as she can, not only as mere characters in the broad strokes of history, but as fully realised people in their own microhistories. However, despite her dedication to this work, Finley remains cautious not to overstep the line of what can be reasonably inferred from the archival material available. Instead of making bold assertions where evidence is unavailable, Finley opts to include the questions that clearly still float behind the work, frustratingly unanswerable without further evidence, and those questions become a prominent feature of Finley’s prose in the text.

As the study progresses, each chapter entwines with the next, as the women who feature in them, and the men who enslaved and abused those women, come into contact with each other through social and economic ties. This interconnectedness results in what is possibly the most fascinating element of the work: the relationships Finley paints between the women that she discusses. Sitting in the centre of what is – towards the final stages of Finley’s text – a fully realised web of oppression, the relationships of solidarity and resistance she details are both inspiring and academically interesting. The extensive, emotionally supportive, and collaborative relationship between Mary Lumpkin and Lucy Ann Cheatham in the final chapter is an extended example of one of those relationships and a highlight of the book. Another of these relationships features prominently in the book’s epilogue, as Finley evocatively recalls how she, quite unexpectedly, found that two of the women her work discusses – Cheatham and Conner – are buried in adjoining plots. The story of finding Cheatham’s and Conner’s graves provides a powerful and appropriate end to a text in which the importance that Finley places in those relationships is clear to see.

Book Review: The Absence of America: The London Stage, 1576-1642 by Gavin Hollis
Review: Labor: Studies in Working-Class History of the Americas: "Food and Work in the Americas" edi...
Event Review: SASA Conference 2022 (Online)