Book Review: The Value of Herman Melville by Geoffrey Sanborn 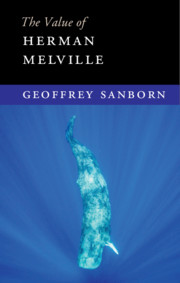 ille’s towering status in American literary and cultural history, it seems rather odd to ponder his ‘value’: his reputation and elevated position in the cultural canon are sufficient to over-awe the reader and convince them that his works must be what is casually referred to as ‘great literature’. Or, on the contrary, the very canonicity and critical attention that Melville’s works have enjoyed over the decades might be used as arguments against any value that we may still find in them nowadays. In The Value of Herman Melville, Geoffrey Sanborn challenges both of these views at once, the complacent as well as the sceptical. Sanborn’s approach here is not to take Melville and his works for granted, but to approach them with an attitude of genuine curiosity and openness. In his view, texts like Moby-Dick were not meant to be ‘a rigorous, depleting experience, a triathlon for the housebound’, but rather ‘a stimulant to thought and feeling; […] meant to make your mind a more interesting and enjoyable place’ (2). To demonstrate this, Sanborn offers a series of explorative close readings, focusing mostly on Moby-Dick as well as Melville’s ‘Killer Bs’: the shorter works ‘Bartleby’, ‘Benito Cereno’, and ‘Billy Budd’.

Sanborn begins his search for the value in Melville by engaging closely with a selection of passages that testify to Melville’s unique ability to distil his wealth of experiences into evocative, aesthetically contained prose that forever hints at something greater than worldly experience. These exciting first two chapters combine technical precision in their analysis with an accessible style, placing them easily among the most enjoyable in the book. Although didactic and detailed in the presentation of the material, Sanborn’s readings are, above all, vivid and thought-provoking. At times, the author seems in direct dialogue with the source text, enriching it as he carries the reader along in his explorative quest.

The book’s core argument, however, unfolds in the following chapters. Starting off with a negative definition of Melville’s value, Sanborn decidedly turns against the idea that Melville is a ‘man who has counsel for his readers’ (28), in the words of Walter Benjamin. Melville’s works should not be read for any takeaways or immediate lessons to be learnt from them. Instead, through readings of ‘Bartleby’ and ‘Benito Cereno’, Sanborn convincingly argues that these texts create what he calls a ‘susceptibility’ in the reader for receiving, discovering, and thinking about truth/s, rather than offering any particular truth themselves. The value of these texts, in this sense, lies in obliquely communicating that there is something to be comprehended in the first place, rather than dictating any particular road to comprehension. They lay the groundwork for understanding, discovery, and the formation of new notions, which is the task of the reader.

Expanding this reader-centered critical approach, Sanborn applies a model of psychoanalysis proposed by Christopher Bollas to arrive at the book’s most original conclusion: traditional textual analysis — with the reader as analyst — is turned on its head, and the text itself takes the functional role of the psychoanalyst, providing the reader with material for individual growth and development, with fundamentally new modes of experience and expression. Melville’s texts, in this view, become sources not so much of an authoritative, higher truth, but of dense and rich ‘psychic textures’ (57) that can give rise to creative thought processes. None of this, however, means that the use and value of Melville lack a political component for Sanborn, who later makes a compelling connection between his way of reading Melville and Hannah Arendt’s observation that ‘active, creative thinking’ (103) can act as a bulwark against evil. Melville, ‘an incalculable person, full of daring & questions, & with all momentous considerations afloat in the crucible of his mind’ (Sophia Hawthorne, quoted in Sanborn, p. 102), urges his readers to ponder — to think daringly and exploratively — rather than accepting fixed truths, and in this lies an integral part of his value for us as readers.

The Value of Herman Melville, in the end, does not serve so much as a traditional work of literary criticism, but rather as a personal and passionate appeal to its readership. It alerts us to the openness and possibilities inherent in Melville’s works and invites us to a continuous and renewed engagement with them. Emulating the very attitude of generative wondering and pondering that Sanborn sees at work in Melville, the book really can be regarded as a companion volume. For the most part resisting the temptation to offer yet another canonical reading of a canonical author, The Value of Herman Melville, like its subject, forcefully attunes us to a ‘vital, pluralistic world, a world in which all things are leaping’ (117).

Sebastian Tants-Boestad is a doctoral researcher at the Heidelberg Center for American Studies (HCA). His thesis focuses on the configurations of trust in the prose writings of Herman Melville. His other research interests include American Transcendentalism, the contemporary novel, and the intersection between intellectual history and narrative texts.
View all posts by Sebastian Tants →
Tagged  American Literature, Book Review, C19 Literature, Melville.
Bookmark the permalink.