The Toppling of Þorfinnur: Vandalism as Dialogue and Direct Action

In the early hours of Oct 2nd, 2018, unidentified parties beheaded a one-hundred-year-old bronze sculpture of the Norse explorer Þorfinnur Karlsefni and hurled it into the Schuylkill River in Philadelphia. Weighing thousands of pounds and standing more than seven feet tall, the statue of Þorfinnur was discovered the next day, completely submerged. The only evidence was a single crowbar located near the scene. Because the Philadelphia Eagles were scheduled to play the Minnesota Vikings that same week, some wondered if a zealous football fan had targeted the statue. But those well-versed in the history of the left-wing activist movement in Philadelphia inferred a deeper significance to the dramatic toppling of Þorfinnur.

Since 2007, the white supremacist group the Keystone State Skinheads, or Keystone United, have held annual rallies in Fairmount Park on Leif Erikson Day (an obscure holiday first designated by Lyndon B. Johnson in 1964), using the sculpture of Þorfinnur as their symbolic meeting point. When anti-racist activists discovered the centrality of this statue to the Keystone State Skinheads, they staged protests and counter events at the site. As they organized each subsequent year to block hate groups from convening at the statue, Antifa and other anti-racist activists deployed direct action tactics including counterprotest, vandalism, and property damage. The statue became the focal point for a series of confrontations, which spanned a decade.

Completed by the Icelandic artist Einar Jónsson in 1918, the sculpture of Þorfinnur Karlsefni was installed in Philadelphia’s Fairmount Park in 1920.[i]  From the statue of Ingólfur Arnarson, one of Iceland’s first settlers, to the monument to 19th century Icelandic independence figure Jón Sigurðsson, Einar Jónsson’s public sculptures have profoundly shaped the visual character of Iceland.  Born in 1847 and educated in Denmark and Rome, Einar Jónsson sailed to the United States in 1917, and was commissioned by the Fairmount Park Art Association to create a sculpture of Þorfinnur Karlsefni, a Norse explorer who, as recounted in Grænlendinga saga and Eirík’s saga rauða, journeyed to Vínland, the fabled Norse settlement in North America. According to the sagas, Þorfinnur Karlsefni Þórðarson set out for Vínland (a few years after Leifur Eiríksson) with his wife Guðríður Þorbjarnardóttir, who gave birth to their son Snorri during their short stay.[ii] A copy of the statue of Þorfinnur is also located in Reykjavík. 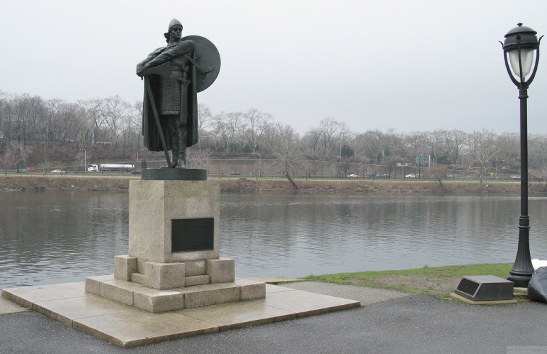 “The Viking” by Michael W. Murphy is licensed with CC BY 2.0.

Within the context of the United States, the Viking explorer has served as an uneasy signifier, employed as a superficial trope in literature and film, invoked as inspiration for space exploration during the Cold War, or misappropriated and coopted by white supremacists as part of their ideological lexis of hate symbols. As Annette Kolodny argues, preoccupation with Nordic “discovery” illustrates what she describes as Anglo-American “anxiety of legitimacy” that underpins a nation with a history of settler colonialism. During the 19th century, American authors like Ralph Waldo Emerson and Henry David Thoreau fantasized and speculated about the location of Vinland. Influenced by the work of the Danish historian Carl Christian Rafn, American poets and fiction writers represented the Viking explorer as a “plastic” symbol with a range of meanings and connotations, some of them diametrically opposed:

Depending on the purpose at hand and the sources cited, the Norse could be depicted variously as heroic warriors and empire builders, barbarous berserker invaders, fighters for freedom, courageous explorers, would-be colonists, seamen and merchants, poets and saga man, glorious ancestors, bloodthirsty pagan pirates, and civilized Christian converts. (204)[iii]

In the 1960’s, the Norwegian couple, Helge Ingstad and Anne Stine Ingstad discovered archaeological evidence of a Norse site in L’Anse aux Meadows in Newfoundland Canada. In the United States to this day, the idea of Vinland remains largely rooted in racialized myths of European “discovery,” and the Viking serves as a malleable figure that in its most sinister form perpetuates fantasies of white male dominance. According to the Southern Poverty Law Center, there are currently at least two active hate groups that use Vinland in their names including the the Vinlanders Social Club and the Wolves of Vinland. In 2017, a white supremacist, who killed two people in Portland posted “Hail Vinland! Hail Victory!” and declared himself a “nationalist for Vinland” on his Facebook shortly before the murder.[iv]

Participating in this misappropriation of Viking lore and imagery, the Keystone State Skinheads imbued the statue of Þorfinnur with ideological and organizational significance. When anti-racist activists in Philadelphia became aware of this, they collected information and organized protests and counter events at the site. One of the central figures behind this anti-racist work is Daryle Lamont Jenkins. With a background in the punk music scene, Jenkins has used deliberate direct action techniques to expose and shame neo-Nazis and skinheads since the 1990s, noting of his early work that “Our mission in life was to chase every neo-Nazi out of whatever music scene we were in.” [v]

In 2000, Jenkins founded One People’s Project, an organization that compiles information about white supremacists and monitors white supremacist activities around the country. Because much of this discourse remains underground and is not typically covered in depth by mainstream media outlets, One People’s Project has stepped in to fill the information gap, often operating on a local level to identify white supremacists. According to their website, the goal of the organization is “to research and report on who’s who and what’s what regarding right-wing groups, individuals, and activities.”[vi] Through their activist work informed by an Antifa ideological framework, they engage in direct action, centered on exposing, opposing, and countering white supremacy. 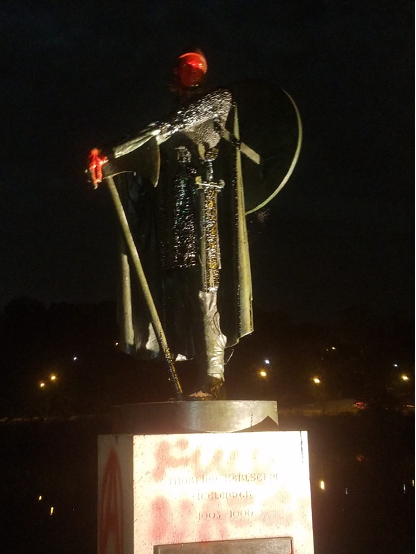 In 2008, members of the Keystone State Skinheads and other white supremacist groups marched to the statue of Þorfinnur to place a wreath on it “in honor of their heritage,” but counter protestors blocked the statue and shouted the white supremacists down.[vii] This pattern persisted over several years as KSS attempted to stake claim on the statue but were obstructed by Antifa. Following an explosive confrontation in 2013 in which Antifa outnumbered the white supremacist factions, the Keystone State Skinheads began disseminating information about their event covertly. In 2015, KSS held their rally in the middle of the night. Anti-racist activists responded by covering the statue’s face in red paint. In the shadows of the election of Trump and the Unite the Right Rally in Charlottesville, the situation in Philadelphia continued to intensify. In 2017, One People’s Project opted for a preemptive move, organizing their own counter event, the Leif Erikson Day Against White Supremacy, Colonialism, and Fascism. The event was scheduled for Saturday, October 7th, from 1 to 3 PM, and in the early morning hours of October 6th, Þorfinnur was spray painted with the words “Fuck Nazis” and covered with anarchy signs.

As the following October approached, left-wing rage was compounded by Donald Trump’s rhetoric and policies as well as his scheduled appearance before the National Electrical Contractors Association at the Philadelphia Convention Center. On October 2nd, 2018, the morning of Trump’s event, a week before Leif Eriksson Day, the sculpture of Þorfinnur was discovered in the river. Police and other city workers arrived at the scene to investigate, and divers were called in to retrieve the statue from the bottom of the river. That afternoon, anti-Trump activists took to the streets of Philadelphia, staging large and colorful demonstrations in City Center and outside the Philadelphia Convention Center. 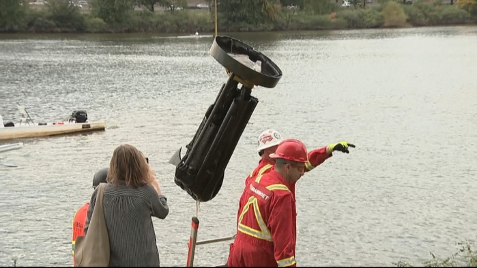 The statue of Þorfinnur Karlsefni remains in conservation, but, unfortunately, the image of the Viking continues to circulate through the subterranean channels of white supremacist spaces not only in the United States but around the globe. In an interview in Metro, Daryle Lamont Jenkins criticized those in power in Philadelphia for failing to intervene and take action sooner: “If this was due to somebody on the left, on our side, it was based on the frustration people have about the non-actions against KSS every year when this happens, not talking about this, not talking about stopping it . . .”[viii] As of 2020 nobody has been charged, and no individual or group has taken credit for toppling Þorfinnur, but the story, which has garnered international media coverage, reveals how vandalism can force a dialogue to emerge in a space of silent complicity.

[iii] Kolodny, Annette. In Search of First Contact: The Vikings of Vinland, the Peoples of the
Dawnland, and the Anglo-American Anxiety of Discovery. Duke UP, 2012.

[v] Goldberg, Michelle. “One Antifa Leader Has Stepped Up to Explain the Shadowy Group’s

A documentary filmmaker and writer, Jodie Childers has published essays on 20th century American left-wing cultural history and political dissent. Her creative work has been featured in Boulevard, Eleven Eleven, The Portland Review, and Poetry East. She is currently completing a PhD in English with a concentration in American studies at the University of Massachusetts, Amherst. In 2018, she was awarded a Leifur Eiríksson Foundation Fellowship to pursue dissertation research in Iceland.
View all posts by Jodie Childers →
Tagged  Memorials and Popular Memory Series, White Supremacy.
Bookmark the permalink.