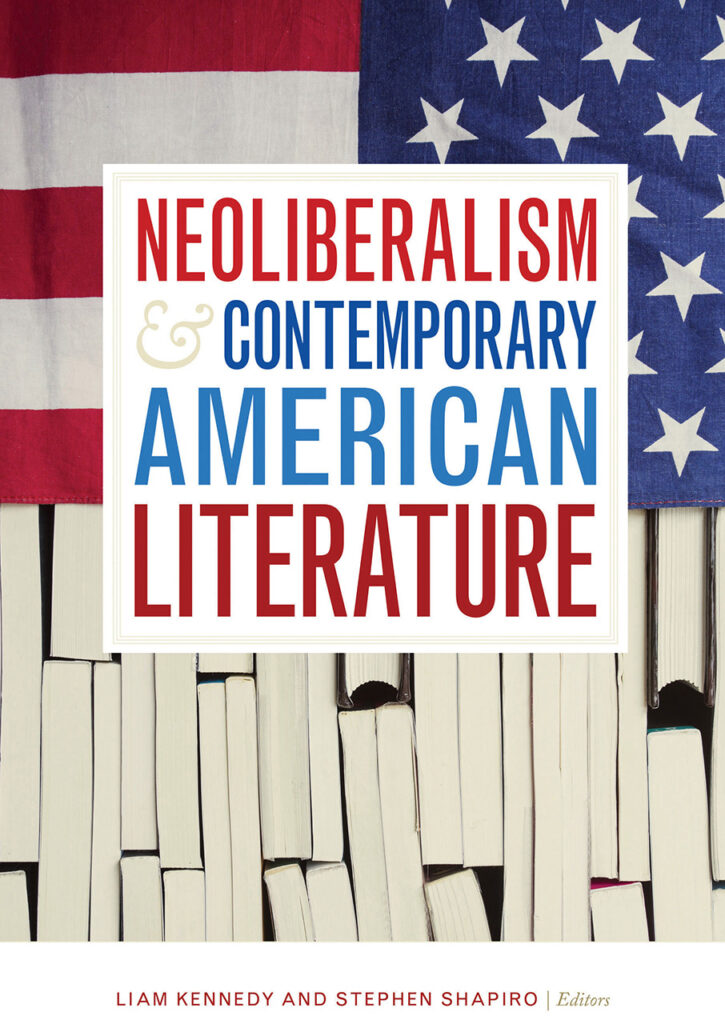 Neoliberalism and Contemporary American Literature is a challenging collection of essays that should reverberate throughout the field. Readers will find a range of insights here into how recent American fiction, in editors Liam Kennedy and Stephen Shapiro’s words, ‘models and interrogates the neoliberal present’ (1). The writers under consideration include some of the most lauded names of the 2010s, such as Ben Lerner, Karen Russell, Rachel Kushner, and Joseph O’Neill. Emerging out of the ‘Neoliberalism and American Literature’ conference that took place at University College Dublin in 2016, the collection also boasts several leading scholars of contemporary American writing. What results is a series of sophisticated analyses of how neoliberal hegemony has influenced ‘the making and meaning of literature’ (1) in the United States since the turn of the 21st century.

Kennedy and Shapiro introduce the volume by explaining how our neoliberal conjuncture came to be. They define neoliberalism on the basis of four tenets: its distinction from 20th century Keynesianism, the elevation of the marketplace, the dissolution of public-private divides, and the saturation of all social reproduction – including literature – with neoliberal ideas. At first glance, this framework recalls Mitchum Huehls’s and Rachel Greenwald Smith’s four-stage model, whereby neoliberalism moves sequentially through economic, political, sociocultural, and ontological registers. However, Kennedy and Shapiro are at pains to distinguish their approach from Huehls’s and Smith’s, which they believe amounts to a ‘conventional (declension) tale of American exceptionalism’ (6). Instead, Kennedy and Shapiro propose a two-phase ‘chronology involving the rhythms of capitalist crisis and altering class relations, as seen through a worlds-systems perspective’ (7). In the first phase, 1929-1960, New Deal Keynesianism existed in a state of interdependency with German Ordoliberalism, while the later success of Friedrich Hayek’s The Road to Serfdom (1944) helped popularise neoliberal thought. After a hinge point in the mid-1960s, when American-led liberalism started to unravel, neoliberalism’s triumphant second phase began. This period passes through the fall of the USSR, Bill Clinton’s war on welfare, and culminates with the 2008 financial crash. In its breadth of detail and clear organisation, this Introduction will be especially useful for scholars who are approaching neoliberalism for the first time.

The two opening chapters, however, are geared more towards subject specialists. In Chapter One, Eli Jelly-Schapiro argues that neoliberalism consists of three temporalities: primitive accumulation, expanded reproduction, and what he theorises as accumulation by fabrication. This refers to ‘the synthetic creation and subsequent assimilation of an outside to capital’ (22), which is evident in processes like the devaluation of assets, or the privatisation of public resources. Jelly-Schapiro points to Kushner’s The Flamethrowers (2013) as a novel that effectively conveys how these temporalities are interlinked. In the following chapter, Steven Shapiro charts the evolution of Foucault’s thought on governmentality, arguing that he posits a new form of power beyond both sovereignty and discipline. Shapiro then suggests that Antoinette Rouvroy’s theory of ‘algorithmic governmentality’ (61), whereby computational models replace human subjects, represents this new phase in (neoliberal) power. For Shapiro, this change poses serious challenges for the American novel, given its traditional concern with exploring the development of liberal subjectivity.

Jelly-Schapiro’s and Shapiro’s contributions mark important theoretical advancements in Marxist and Foucauldian analyses of neoliberalism, but they are quite light on literary readings. This task falls to the book’s eight remaining entries. A memorable chapter in this regard is Donald E. Pease’s reading of Joseph O’Neill’s Netherland (2008). Pease argues that, in the rush to canonize Netherland, critics have misattributed ‘quasi-utopian purposes’ (139) to the relationship between characters Hans van den Broek and Chuck Ramkissoon. As a result, they partake in a ‘neo-liberal fantasy work […] whose purpose is to establish an imaginary relationship with the financialized-military complex Hans depends upon for his livelihood’ (140). Elsewhere, Liam Kennedy casts a similar re-evaluative scrutiny on Dave Eggers’s A Hologram for the King (2012) and O’Neill’s The Dog (2013). Kennedy argues that Eggers’s and O’Neill’s investment in realist form and hapless white male protagonists frustrates their attempts to produce ‘worldly’ narratives; in this case, narratives that can address the harsh neoliberal realities of their Middle Eastern settings.

While Kennedy and Pease share a focus on O’Neill’s work, Myka Tucker-Abramson echoes Jelly-Schapiro by looking at The Flamethrowers, albeit in much greater depth. In fact, chapters elsewhere on Lerner, Don DeLillo, and Gary Shteyngart create a somewhat familiar (and predominantly white) roll-call of contemporary American authors. In this light, the two pieces on genre fiction are refreshing. Caren Irr, for one, examines how anti-human trafficking crime novels such as Corban Addison’s A Walk Across the Sun (2012) and Linda Fairstein’s Hell Gate (2010) ‘envision the freed slave as necessarily benefitting from entry into a laissez-faire market in labor, a market defined by precarious autonomy’ (171). In the last chapter, meanwhile, Dan Hassler-Forrest considers the science fiction writer Kim Stanley Robinson. He argues that in the Mars Trilogy (1992-96), 2312 (2012), and Aurora (2015) Robinson draws on science fiction’s traditional (but recently maligned) utopian imaginary to ‘question, critique, and challenge neoliberalism’s cultural logic’ (209).

Neoliberalism and Contemporary American Literature will pay dividends to those who are interested in the specific authors and texts under analysis. This is despite the fact that the collection would have benefitted from a more expansive attention to literature, particularly beyond the novel. When it comes to neoliberalism, the volume leaves one in little doubt that this concept remains a useful – perhaps indispensable – lens through which to view the course of American writing over the past two decades.