“I’d Rather Vote for a Tuna Fish Sandwich”: Never Trumpers and the 2020 Presidential Election 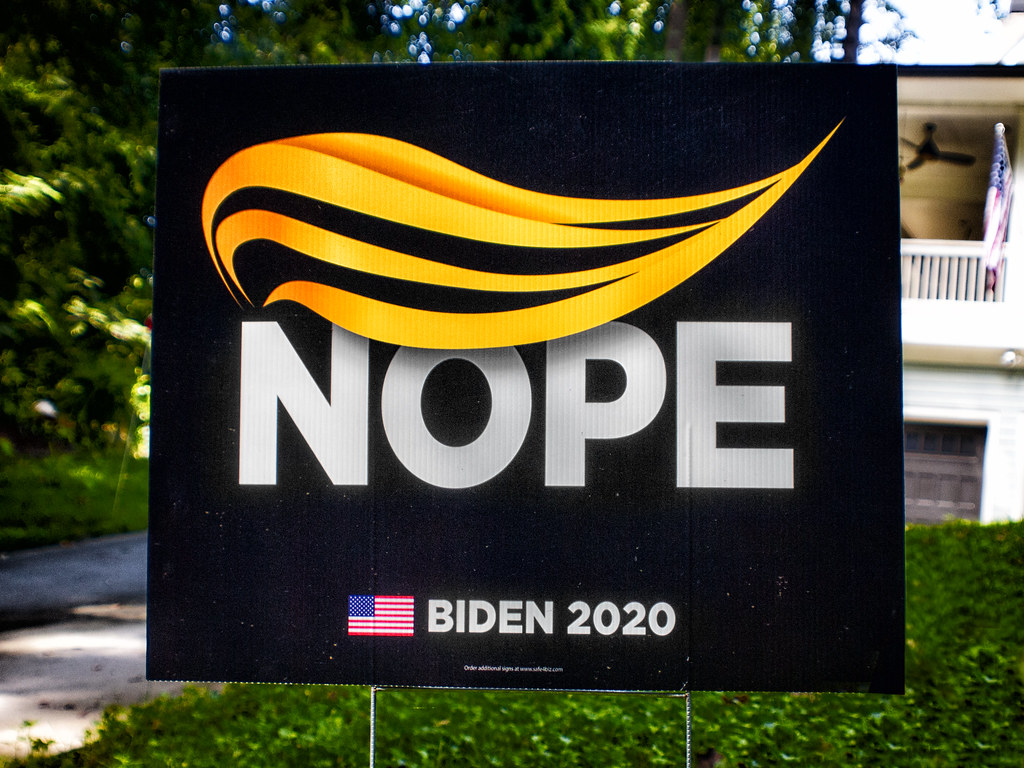 “Nope” by Thomas Cizauskas is licensed under CC BY-NC-ND 2.0

“The man is categorically unfit to be president,” declares Bardon from Kentucky. Todd from Oregon agrees, arguing that “Trump’s daily tweet storms and fragile ego show he is dangerously incompetent.” Meanwhile, Dianne in Utah is concerned that “Trump cares about his image more than he cares about saving lives.” You would be forgiven for thinking that these comments came from disgruntled Democrats fed up with the Presidency of Donald J. Trump, but they are actually quotes featured on the website Republican Voters Against Trump (RVAT) a major group in the growing Never Trump movement.[1]

The Never Trump movement began during 2016 when a number of prominent Republicans declined to support Trump as the Republican Party Presidential Nominee, voting instead for Hillary Clinton. The movement gained prominence when the hashtag #NeverTrump began trending on Twitter in the autumn of 2016, but did not change the outcome of the election. Having failed to prevent Trump from gaining the presidency in 2016, the movement now intends to make him a one-term president. The movement is made up of a variety of factions including, lawyers, public intellectuals, former political advisors and foreign policy experts and unhappy voters. Crucially, the Never Trump movement remains committed to the Republican Party.[2] The movement values limited government, the free market and the history of conservative thought over the ethnic and economic nationalism favoured by Trump. Thus, the concern for Never Trumpers is not Trump’s assault on liberal ideology, but rather his debasement of traditional conservative values. It is this disquiet which distinguishes the Never Trump movement from anti-Trump Democrats. Until a year ago, the movement was generally viewed as dying off. However, with the recent launch of two important ventures, The Lincoln Project and Defending Democracy Together, there has been a resurgence of interest.

The Lincoln Project formed in December 2019 under the direction of George Conway, Reed Galen, Jennifer Horn, Rick Wilson, Mike Madrid, Ron Steslow, Steve Schmidt and John Weaver. The group gained instant attention thanks to its co-founder George Conway, husband of Kellyanne Conway, the political consultant behind Trump’s 2016 campaign and the infamous phrase “alternative facts.”[3] As its name implies, The Lincoln Project, is focused on creating a patriotic image and describes itself as ‘holding accountable those who would violate their oaths to the constitution and put others before Americans.’[4] Its website offers a variety of merchandise for sale which makes more explicit reference to its disgust with President Trump. Products on offer include stickers with slogans such as ‘Save the USPS’ and a T-shirt with Trump’s trademark hairline and the phrase ‘Impotus Americanus Endangered 11.3.2020.’[5]

However, what has really brought attention to the group is its video campaign. Each week the project releases at least one video highlighting the general failures and misgivings of Donald Trump as well as his campaign. These short videos, usually around a minute long, focus on a wealth of issues such as ratings, racism, misogyny and coronavirus. The videos are slick montages with superimposed text, which often hammers home the key messages of the voiceover. The 16 June 2020 video entitled #Trumpisnotwell focused on a series of short clips in which the president appears frail and suggests that Trump is quite literally not fit for office.[6] At his rally in Tulsa, Oklahoma, Trump took particular pain to stress the context behind this footage and was clearly irked by the messaging. The fact that videos are able to irritate Trump this much demonstrates the efficacy of The Lincoln Project to spark controversy, and consequently draw a large audience.

Another group which has capitalised on anti-Trump feelings is Defending Democracy Together. The project is the brain child of long time Never Trumper, William Kristol. Kristol, the son of the “Godfather of Neoconservatism” Irving Kristol and prominent historian Gertrude Himmelfarb, formerly served as the chief of staff for George W. Bush and edited the neoconservative journal, The Weekly Standard. Other figures involved in the organisation including, Linda Chavez, the highest-ranking woman in Ronald Regan’s cabinet and Christine Todd Whitman, former Governor of New Jersey, also demonstrate the prestigious conservative credentials of the initiative.[7] The group supports a number of projects such as the Becoming American Initiative, which focuses on immigration, Republicans for the Rule of Law, Former Republican National Security Officials for Biden, Stand With Allies, The Russia Tweets, a search engine of Russian trolls, and most importantly RVAT.

RVAT was founded in May 2020 and, unlike other Never Trump projects, is focused not on elite policy makers, but ordinary Republican voters. Just like The Lincoln Project, RVAT is couched in patriotic language and concerns itself with putting the greater good above party interest. It declares:

The language reminds supporters of a legacy of traditional conservative politics concerned with decency and legitimacy and positions itself against the Trumpian version of Republican politics.

The site is principally focused on telling the stories of over four hundred disaffected Republican voters. These voters, male and female, young and old, come from across the USA and all recount why they are voting for Biden despite remaining committed Republicans. Gary from Florida stressed that “Even though I’ll be voting against Trump in this election, it’s important to repeat I’m still a Republican and always will be.” Whilst Nancy in North Carolina pleads, “If you are a Republican and you find it implausible to vote for a Democrat, I will just tell you it’s not that hard. I’m asking you to consider, please vote Biden 2020.”[9] Unlike the Lincoln Project, these videos are not glossy, they are largely filmed at home on smartphones or laptops and present the viewer with a real and authentic Republican voice. This tactic is unique as it appeals to ordinary voters rather than policy elites and creates a sense of community for those Republican voters who feel lost in the Trump era.

What is certain is that Biden would be amiss to ignore the Never Trump movement. Trump won the Electoral College with just 77,000 votes in 2016; Biden needs only to gain a small number of these votes to secure the presidency. In order to do so, Biden has little to do. He simply must present himself as a proficient leader concerned with moral decency; the desire for a more statesmanlike leader unites the Never Trump movement with their liberal counterparts. Yet, the question remains, if Biden secures these votes, how will he sustain the alliance? Some Democrats fear that the coalition will see a shift in Biden’s polices to the right. This seems unlikely; there are already signs that some Never Trumpers are moving left on issues such as voter registration.[12] But much of the future of this alliance will depend on the direction of the Republican Party itself. If the party returns to its traditional post-war conservative values, Never Trumpers will see their agenda as complete and return home to the party.[13] If the Trumpian Republican Party remains, the Never Trumpers will find themselves forced to accept the liberal agenda of the Democrats or remain ideologically homeless. Thus, what is at stake for the Never Trumpers is not just the removal of Trump from office, but the very future of the conservative values to which they ascribe.

[10] Tessa Bereson and Alana Abramson, ‘Revenge of the Never Trumpers: Meet the Republican Dissidents fighting to Push Donald Trump Out of Office,’ The Atlantic, July 28, 2020. https://www.theatlantic.com/ideas/archive/2020/07/revenge-never-trumpers/614656/

[12] Bereson and Abramson, ‘Revenge of the Never Trumpers’

To Protect the Innocent: Does Comic Book Censorship to Prevent Youth Corruption Make Sense?
Chickasaw Gender Roles and Slavery During the Plan for Civilization
African Americans and Anti-Colonialism

Emily Hull is a PhD student at the UCL Institute of the Americas funded by a Wolfson Postgraduate Scholarship in the Humanities. Emily’s PhD thesis uses the life of Irving Kristol, the ex-Trotskyist turned “godfather of neoconservatism,” to explore transformations in American intellectual and political life during the twentieth century.
View all posts by Emily Hull →
Tagged  American Politics, Election Series 2020, Politics.
Bookmark the permalink.