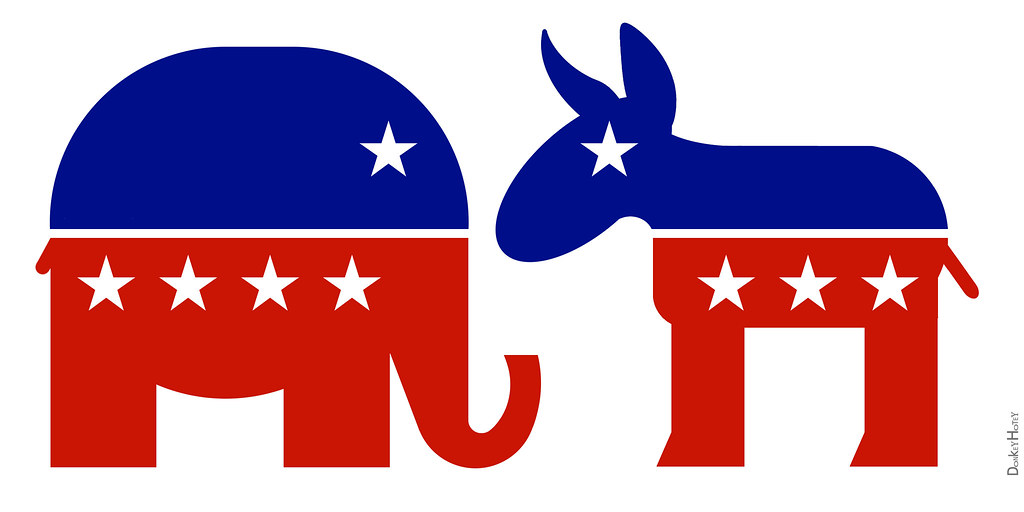 “Republican Elephant & Democratic Donkey – Icons” by DonkeyHotey is licensed under CC BY 2.0 Accessed via the Creative Commons

The United States is approaching an historic presidential election. With the country facing multiple crises, both Democrats and Republicans are arguing that the election of their counterparts would lead to the end of America as their constituents envision it. Uncertain of their prospects, President Trump and the Republican Party are attempting to spread doubt about the integrity of the election and have vowed to send groups of their supporters to monitor polling places. Democrats are trying to hold together a broad coalition to beat Trump and take back the Senate. Polls from across the country suggest Biden has a dominant lead, but, after 2016, everyone knows to be sceptical of the numbers. The election will not solve the deep conflicts with which the nation is grappling. It is, however, an inflection point that will influence the direction of the country for many years to come.

This series delves into several key aspects of the election including race, religion, gender, political identity, and the United States’ relationship with the rest of the world. Over the next few weeks running up to the election, scholars will examine topics from the presidential race, providing essential historical and cultural context to deepen our understanding of the origins of the political rhetoric and ideologies we are presented with through the campaigns.

To kick off the series, we look at the influence of race and religion on the discussion of presidential candidates. Connie Thomas explores the Constitutional origins of birtherism, providing historical insight to the term that has been used to try to delegitimise primarily non-white candidates, such as Barack Obama and Kamala Harris. Carole Grose continues thinking about race and electoral framing by showing how the Trump campaign draws on Jim Crow ideas and Evangelical versions of biblical stories to attempt to delegitimise the Biden-Harris ticket and rally Trump’s base.

The second theme we explore is the role of Trump within the Republican Party and political discourse in the United States. Emily Hull provides an overview of the Never Trump movement led by disaffected Republicans. She analyses how it has taken shape over the course of Trump’s presidency and looks at how it could influence the election outcome. In contrast to the divergent thrust of the Never Trumpers, Dr. Tom Packer argues that Trump’s candidacy and administration is not a true departure from the Republican party of the late-twentieth century and that Trump has indeed not taken over the party, or even necessarily transformed it. Ben Quail examines Trump’s unique political rhetoric and use of social media. By doing so, he suggest that what was once Trump’s advantage, has turned into his weakness and will in fact be his undoing.

We then cast a wider lens, looking beyond the candidates themselves. Molly Becker takes an insightful look at the idea of “the swing state” through historical analysis of Indiana’s presidential voting history over the past 150 years. She questions the catchall nature of this phrase and illustrates how various elements, such as voter turnout and candidate presence play crucial roles in determining how Electoral College votes are won. Elizabeth Reese turns our attention to the potential First Ladies, Melania Trump and Dr. Jill Biden. Through analysis of both women’s campaign presence and speeches, Reese illuminates how both campaigns present different ideas of womanhood, the American family, and the first lady or gentleman’s role in the twenty-first century.

The final week of the series turns to foreign policy. Dr. Timothy Peacock analyses how the joint seventy-fifth anniversaries of the Trinity nuclear test and the bombings of Hiroshima and Nagasaki have been celebrated or avoided by the Trump Administration/Campaign and the Biden Campaign to make important signals regarding their approaches to foreign policy. Quinn Newman looks at how each presidential candidate will formulate their policy towards China. By analysing how both Trump and Biden have approached China in the past and weighing the spread of COVID-19 along with campaign rhetoric, he outlines how each administration would likely proceed with the U.S.-China relationship.

Amanda Niedfeldt is a PhD Candidate in English at the University of Minnesota-Twin Cities and a Co-Editor of U.S. Studies Online. Her research is on the Cold War and the influence of philanthropies in cultural production and the United States' international relationships. Her dissertation is entitled, "Literature of Warning: The State-Private Network, Cultural Patronage, and the Emergence of Foundation Literature during the Cold War".
View all posts by Amanda Niedfeldt →
Tagged  Election Series 2020, Politics.
Bookmark the permalink.