“Born in the USA”: Birtherism and the US Presidency 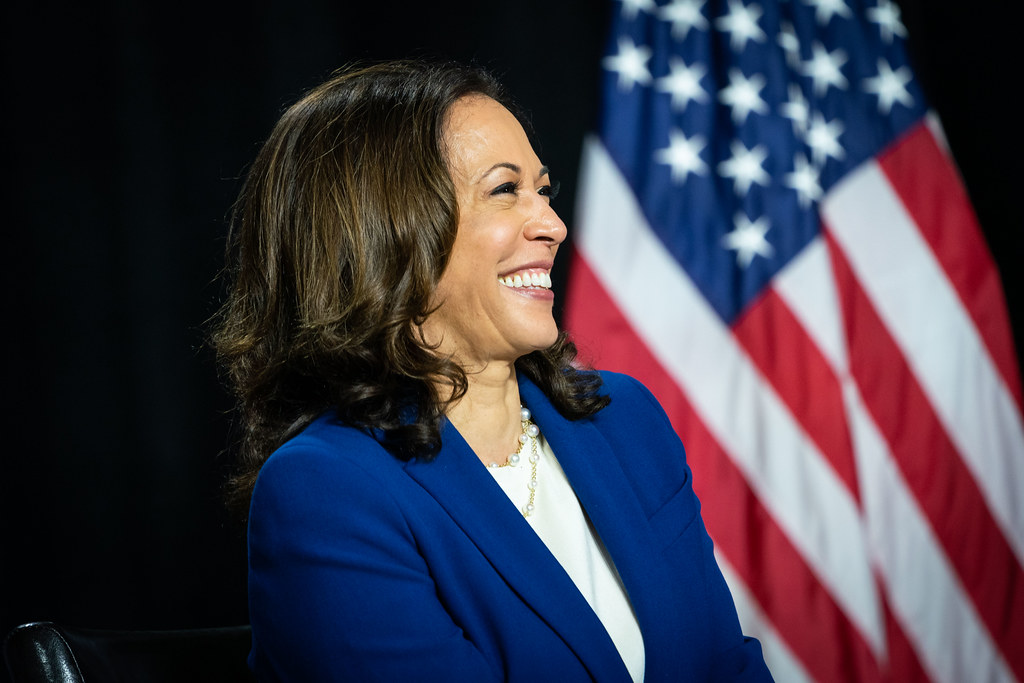 “Announcement of Senator Kamala Harris as Candidate for Vice President of the United States – Wilmington, DE – August 12, 2020” by Biden For President is licensed under CC BY-NC-SA 2.0

Following the Democratic Party’s nomination of Senator Kamala Harris as their Vice-Presidential candidate in the 2020 election, President Donald Trump claimed in a White House briefing, “I heard it today that she doesn’t meet the requirements.” His comments hinged on a racist birther claim that Harris is not a natural-born US Citizen, and thus is ineligible to hold the office. He added, “I would have assumed, that the Democrats would have checked that out before she gets chosen to run for vice president.”[i]

His comments were, of course, completely unfounded. Senator Harris was born in California, making her unequivocally eligible. Trump’s remarks represent yet another example of the racialised rhetoric that has pervaded the Republican Party. Birtherism, as it has come to be known, questions the citizenship status of candidates, falsely accusing them of being ineligible for the presidency. Yet, it stems from baseless nationalistic claims deeply rooted in the Constitution.

While birtherism has only gained momentum in recent years, the discriminatory instincts that it manifests have deep roots in the Constitution itself. Nationalism framed the ideology of most founders as they sought to define their newfound American identity; one that was inherently exceptionalist and constructed using categories of exclusion. Unsurprisingly, race formed a fundamental part of this, but it was equally articulated through fears of ‘un-American’ influence; namely that foreign actors would somehow subvert the new political system. When the Constitution was drafted in 1787, these concerns were prominent in its founding Convention. In a xenophobic diatribe to the Convention, a Virginian plantation owner asserted that “we did not [choose] to let foreigners and adventurers makes laws for us and govern us.” Meanwhile, Gouverneur Morris, the acting assistant superintendent of Finance of the United States, warned of the “danger of admitting strangers into our public councils” to the protest of his colleagues, several of whom were immigrants themselves. While these concerns were not necessarily shared by a majority of delegates in the Convention, it is significant that both men served on the committee of just eleven that drafted the clause restricting the presidency to natural-born citizens.[ii]

The inclination to restrict the political rights of those considered not American enough did not stop there. During the Constitution’s ratification, several states proposed an amendment that would restrict eligibility for all federal officeholding to natural-born citizens.[iii] Massachusetts and Connecticut went one step further, codifying this into state law for their federal representatives in 1798. Though only explicit in a cluster of Northern states, this highlighted the nationalistic concerns operating within political discourse; concerns that are resurfacing within Republican ideology today.

The presidential campaign of Barack Obama in 2008 brought birtherism to the fore of contemporary political discourse. From the outset of his nomination, there was extensive media coverage that questioned Obama’s eligibility for the Presidency based on his nationality and religious background. Most notably, proponents of the movement disputed that Obama was born in Hawaii, arguing instead that he was originally from Kenya; an undoubtedly racist accusation. While Birtherism originated in far-right media outlets, such as Breitbart, it was quickly circulated by mainstream Republicans. Amongst its proponents were Vice-President nominee Sarah Palin and former Speaker of the House Newt Gingrich.

Significantly, President Donald Trump has been a vigorous proponent of birther allegations. Throughout the Obama administration, Trump stoked lies about Obama’s nationality across several popular news outlets, such as Fox News, CNN, MSNBC and ABC News. Even after the Obama campaign had published his birth certificate confirming his citizenship status, Trump tweeted in August 2012 that an “extremely credible source” confirmed that “Obama’s birth certificate is a fraud”.[iv] Only upon his own run for office in 2016 did Trump conveniently rescind his birther claims.

Republican senators John McCain, Ted Cruz and Marco Rubio have all had their nationality questioned during their respective presidential campaigns, though the scale of these disputes were incomparable to the birtherism targeted at Obama. What is notably distinct for Obama, the first African American President, is the racialised rhetoric accompanying such doubts. Even after his inauguration, lies about his eligibility, religion, and nationality persisted in political discourse. Extending beyond typical campaign attacks critiquing a candidate’s political agenda, partisanship, or inexperience, birthers instead weaponised their movement as a tool of racial othering and nationalistic ideology. Attempts to cast Obama as ‘un-American’ were, and still are, the ultimate sign that these once fringe beliefs in the Republican party had come to the fore.

The birther movement and its explicit connection with President Trump has left a marked legacy in Republican rhetoric, particularly coming into 2020. In an echo of their response to the Obama campaign, proponents of birther conspiracies responded to the Democratic nomination of Kamala Harris with scepticism of her citizenship status; crucially, these claims have since been repeated by Trump himself and legitimised to his Republican base. It is no coincidence that Harris, only the second person of colour on a major party presidential ticket, has become subject to the same racist rhetoric that plagued Obama’s political career.

In the run up to the 2020 election, most news outlets have sought to explicitly distance themselves from birtherism, though they still permeate discourse. A recent Newsweek op-ed doubting Harris’ eligibility has been criticised for forwarding birther claims. In response, the editor subsequently apologised for accusing Harris of “somehow not being truly American”, noting that the publication was “horrified” at the wave of racism and xenophobia it has elicited. Yet, the article still remains in its entirety, including a deeply problematic poll which prompts readers to answer, “Do you think Kamala Harris is eligible to be the VP?” As of September 25, 2020, a staggering 31% of the twelve thousand respondents believe Harris to be ineligible. Despite attempts to avoid giving birther claims any promotion, they are clearly still popular amongst the public.

During Obama’s re-election campaign in 2012, his campaign sold tongue-in-cheek merchandise emblazoned with his birth certificate, each accompanied with the slogan “Made in the USA.” The campaign added, “There’s really no way to make the birth certificate conspiracy completely go away, so we might as well laugh at it.” The same might be said of the birther movement as a whole. Should we be surprised that an eligibility requirement built upon attempts to block the influence of those considered ‘un-American’ has mutated into birtherism? In short, no. The Constitution shaped the Presidency with a nationalistic approach in mind. By its very nature, it emphasises the role of nationality and citizenship, justifying their use as tools of exclusion.

Racism has only further exacerbated these already ugly debates. Inflamed by an increasingly diverse set of presidential candidates, birtherism is theanifestation of the racial and religious othering that has become so prominent in political discourse. 2020 marks a paradoxical moment in this conflict: while a significant proportion of Trump’s base remains hostile toward allegedly ‘un-American’ candidates, both the presidential and congressional elections are set to be the most ethnically diverse in the country’s history.

As was the case with Obama, should Harris be elected, it is unlikely that these debates will dissipate. A fundamental shift in the way Americans perceive nationality, and its subsequent use as a weapon of political exclusion, is needed to make change. To combat the effect of the birther movement on US elections, voters first need to reckon with what it means to be an American.

[ii] For these comments and for more insight into Constitutional debates on eligibility for Federal officeholding, see debates from July 26; August 8, 9, 13, 22; September 4 in Max Farrand, The Records of the Federal Convention of 1787, 3 Vols, (New Haven, CT: Yale University Press, 1911). Digitalized by the Library of Congress here.

[iii] The amendment ultimately failed, but the majority of North-Eastern states legislated strict eligibility requirements anyway. Though spearheaded by the Massachusetts Legislature, similar resolves were passed in New York, Connecticut and New Jersey throughout the 1790s.

[iv] Including this particular tweet, ABC have reported that Trump has tweeted about false birther claims an astounding 67 times. For a full list, see here.

Connie Thomas is a History PhD candidate at Queen Mary, University of London. She forms part of the Leverhulme Trust Doctoral Programme on ‘Mobile People’, which seeks to better understand transversal mobility through an interdisciplinary lens. Her research focuses on immigration policy in the United States during the founding era. It explores the relationship between regional migration politics and the development of federal policy, drawing particular attention to the ideas of citizenship, partisanship, and constitutionalism.
View all posts by Connie Thomas →
Tagged  American Politics, Election Series 2020, Politics.
Bookmark the permalink.