60 Seconds with Siân Round

Siân Round is a first-year PhD candidate in American Literature at University of Cambridge and is the Book Reviews Editor for 2020-2022. 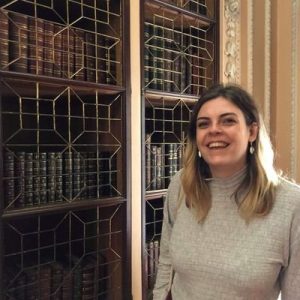 Tell us a bit about yourself

I’m Siân and I’m a first year PhD candidate in American Literature at Cambridge. Originally from the Wirral, I have previously studied in Durham and Oxford but will look for any excuse to come home to Merseyside. When not burying myself in books, I spend a lot of time watching films and visiting art galleries. I’ve also been known to dabble in competitive quizzing.

What do you research and why?

I research literary magazines in the US South in 1920s and 30s and their relationship to the period known as the Southern Renaissance. I’m particularly interested in how editors conceive of their readership and how they attempt to present a particular idea of the South to a Northern, and sometimes international, readership. My interest in the South started during my undergrad, when I wrote a dissertation on William Faulkner’s British reception. Since then, I’ve been obsessed with how the South is read and how Southern writers present themselves.

You’re throwing a fantasy dinner party for 6. Who’s invited and why?

Off the top of my head, along with myself, I would invite William Faulkner, Toni Morrison, David Lynch, Joan Didion and Percival Everett (Admittedly, this would be a very weird night and I don’t think my guests would like each other very much!)

In a Desert Island Discs: American Studies scenario, what song and book are you taking?

I think of all songs, Joanna Newsom’s ‘Only Skin’ is the one I could listen to again and again and, at nearly 17 minutes long, it would take a long time to get boring.

Picking just one book is harder as I’m something of a hoarder and the idea of only taking one is heart-breaking. Rather than choosing something that I could spend years puzzling over like Moby-Dick, I think I would take a book I would find endlessly gripping and entertaining like Donna Tartt’s The Secret History.

What do you hope to achieve during your time with USSO?

I want to encourage a range of dynamic and engaging book reviews, of texts both scholarly and popular, and to organise some thematic clusters of reviews. I am looking forward to working with other PhD students and ECRs on their reviews and I’m excited to find out about lots of books outside my field I would never have known about otherwise.