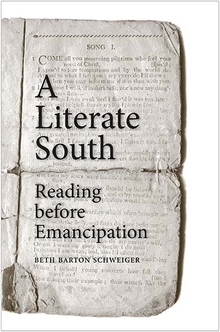 ‘Culture is ordinary: that is where we must start.’ Raymond Williams’ famous statement provides an epigraph to Beth Barton Schweiger’s important study of reading in the antebellum South, A Literate South: Reading Before Emancipation.[i] Barton Schweiger builds on Williams’ statement to provide a bank of evidence that culture was, indeed, ordinary, in the rural antebellum South. Using two chief examples, the diaries of two families, the Cooleys in Virginia and the Speers in North Carolina, Schweiger uncovers how reading and printed materials were important parts of Southern culture, and how this is often ignored in studies of the period. These diaries offer lists of reading material including ‘English novels, newspapers […] the Bible, biographies, religious tracts, grammar, songsters, advice literature, and several national magazines’ (ix). This vast variety of printed material pulls apart any notion that the rural South was backward or illiterate: as Barton Schweiger says, ‘More people could read in the southern states than almost anywhere in the Western world in 1850 and they had many things to read’ (x). Starting from this bold but accurate statement, Schweiger establishes a new trajectory for Southern studies, and thereby reconsiders how the South has been treated in American history.

Building upon the works of Michael O’Brien and Jonathan Daniel Wells, who have both helped to uncover the literate, cultured South in the antebellum period, Barton Schweiger shows how pervasive printed matter was to both literate and illiterate Southerners.[ii] Williams is also an important figure in Barton Schweiger’s text, and she uses him to show the diffusion of knowledge from print to folk cultures, that print culture was something so embedded in rural life that even those who were unable to read were profoundly affected by printed material. She also uses Williams to help explain why history has forgotten rural Southern readers: ‘The liberal orthodoxy that a reading people would embrace liberty was the form that Williams’s “problem of perspective” has taken in American history’ (xiv). Barton Schweiger notes that, being far from the American centres of publishing, much of the reading matter in the South was ephemeral or did not have a fixed owner: for example, many schoolbooks were passed down year to year. Reading material pervaded Southern culture, even for those who could not read and write, and the second half of the book shows the impact of the printed word on oral culture, including songs and religious doctrine.

Barton Schweiger also details how books and printed matter were used in that period. While current ideologies of literacy consider reading to be a liberalising experience, and Barton Schweiger cites Frederick Douglass’ famous story of learning to read, A Literate South shows how reading often brought about obedience and deference. This is why, she argues, slaves learning to read was not a concern for early nineteenth century slaveowners. It was only when reading became attached to writing, that is, when slaves were given a voice, that danger was attached to reading. Barton Schweiger is not trying to paint the rural South as a literate, culturally thriving region — and Southern people as liberal and democratic as a result of it — but rather she is evincing Raymond Williams’ point of the pervasiveness of culture, and with that, of print.

Barton Schweiger uses a wide range of sources in her argument, showing that using census matter is immaterial to gauge how many people were literate since modern ideologies of literacy were not invented (indeed, the term ‘literacy’ was not coined until 1880). Particularly significant to her argument is Barton Schweiger’s work on schoolbooks and the levels of reading slaves were able to attain (spelling), compared to poor whites (grammar), and finally to middle-class white people (rhetoric). Throughout this, she provides a nuanced account of what reading meant to people in the rural South, even to those who would nowadays be considered illiterate. Barton Schweiger’s recurrent examples of the two Southern families helps to bolster this account, although it is a shame that she has not included a wider range of families, since the Cooleys and Speers often appear fairly similar in their reading habits and uses of reading. Saying that, Barton Schweiger makes a point of how difficult this material is to find, particularly since most evidence of reading in the antebellum rural South has been destroyed. Perhaps, however, more prominence could have been given to Jincy, the Cooley’s slave who learns to spell.

The book’s limitations are closely linked to the very argument it makes; the lack of records available. Barton Schweiger has outlined what her title claims — ‘A Literate South’ — and, having read it, it becomes clear how reading publics in the South have been maligned by Northern predominance and the lack of publishing centres. Barton Schweiger’s book could have focused more on how, and why, these records don’t exist but, overall, the book goes a long way towards reclaiming the literate history of the rural South through deeply researched micro-histories of the region, leaving the macro to O’Brien and Wells.

Siân Round is a PhD candidate in American Literature at Jesus College, Cambridge. Her research on the US South explores the transatlantic influence, circulation, and reception of interwar literary magazines, as well as the ways that British and European authors were presented in these magazines. Her work thus reevaluates the role that periodicals played in the emergence of the (idea of a) Southern Renaissance and the impact this had on Southern literature throughout the twentieth century. Siân holds a BA from Durham University, where she wrote a dissertation on the British reception of William Faulkner, and a Masters from Oxford, having completed a dissertation on Conceptualisations of Europe in the Journalism and Fiction of Lillian Smith.
View all posts by Siân Round →
Tagged  C19, Cultural History, Literacy, Literature, Southern History.
Bookmark the permalink.