This essay is the fourth in our series, ‘Literature, Visual Imagery and Material Culture in American Studies’. The series seeks to situate literature, visual imagery and material culture at the heart of American studies, and will explore the varying ways in which written and non-written sources have been created, politicised, exploited, and celebrated by the diverse peoples of the United States and beyond. You can find out more information here.

Vivian Maier (1926-2009) worked as a live-in full-time domestic nanny between 1952 and 2000. At the same time, she took thousands of photographs. Since her death in 2009, Maier has steadily been gaining a posthumous recognition for her photographic output. At first, this took place on online public platforms. Momentum has since been gathering towards acknowledging Maier as one of the most iconic and prolific street photographers of her generation.

It is important to note that there has been little in the way of scholarly literature on Maier. Such media headlines as: ‘Our Nanny: The Photographer Vivian Maier’ (the Guardian) and, more recently, ‘The Nanny with a Secret Hobby’ (the Economist), posit Maier as an exception and at the same time fictionalise her. It is quite telling that the Guardian article was posted under the ‘family’ sub-category: a blatant example of the gendering of Maier’s photographic practice. [1]

This paper will attempt to deconstruct this view of Maier and emphasise instead the social and political content of her output and the context surrounding it – something that, it will be argued, has been lost in the attempt to construct Maier as a photographer with a capital ‘P’. Indeed, by examining Maier’s photography — subject matter and compositional characteristics — which often depicts civil unrest either directly or indirectly, this paper will argue there was a burgeoning political conversation developing both inside and outside the home which often converged on the street.

Maier collected political badges and newspaper cuttings that she kept in folders which disparate collectors acquired from her repossessed storage lockers.[2] Many of Maier’s photographs show her taking pictures of newspapers, either found on the streets crumpled, arranged by her – open to specific pages or seen on newspaper stands. Some are more overt. For instance, at the centre of the composition in Chicago, 1973 (1973) [Fig.1] is a newspaper stand, at the front of which is the Chicago Tribune with a headline, ‘Bombs Saved Lives: Nixon’. Underneath the headline is a photograph of Nixon: a visual representation. However, covering Nixon’s eyes is part of the newspaper stand. Visible is his wide-open mouth, and his forehead. This juxtaposition transforms the photograph; cutting Nixon’s head from his body suggests a deliberate obliteration of his image. The square frame composition creates the impression that the image has been censored, and ultimately Maier has welcomed the opportunity to capture this moment. This makes clear Maier’s fascination with documenting news, critically engaging with how events are displayed and evaluated in public media outlets. 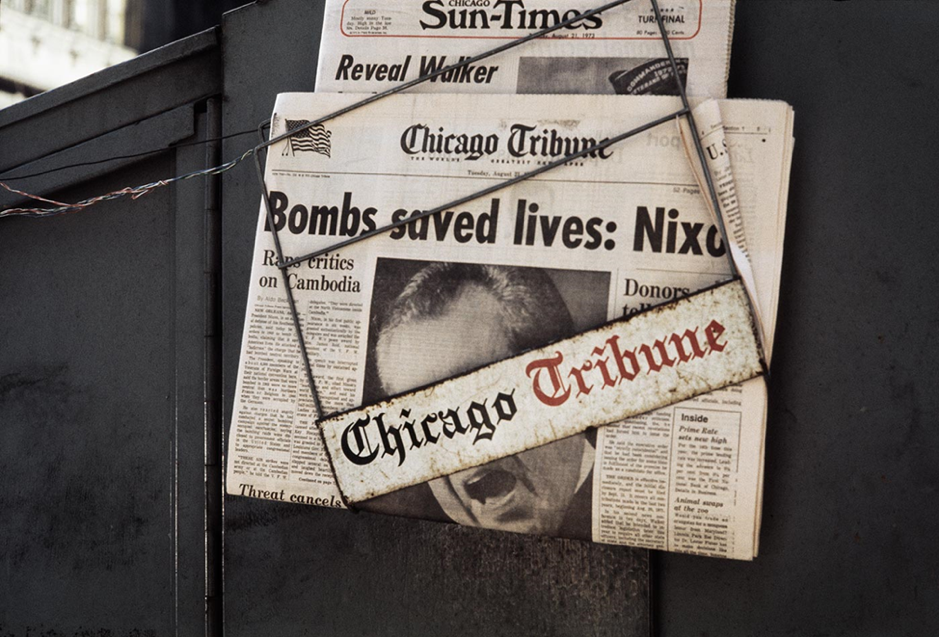 Vivian Maier being on the outside, being a nanny, put her in a kind of nether world, an in-between space – within the home and outside the home, belonging and not belonging to a household.  She chose to spend a lot of time on the street with her photography, and within the subject matter there is the impression that she is trying to create a dialogue within these worlds and capture the sense of unease that is bubbling up on the street.

Untitled (date unknown) [Fig.2] highlights Maier’s interest in the subversive opinions that were surfacing on the streets of 60s and 70s America. In this image, a post box situated on the edge of the curb in front of a busy street with cars going by has been graffitied with the words, ‘men must change or die.’ The relationship between art and politics had intensified during this period with demonstrations and collective action becoming widespread under organisations such as the Art Worker’s Coalition, Women Artists and Revolution and Ad Hoc Women Artists Committee.[3]

The graffiti scrawled on the post box has a striking similarity to passages in Valerie Solanas’ SCUM Manifesto published in 1968. In it, Solanas puts forth her ideology for societal change:

In other words, men won’t grant women equality: they must be compelled. 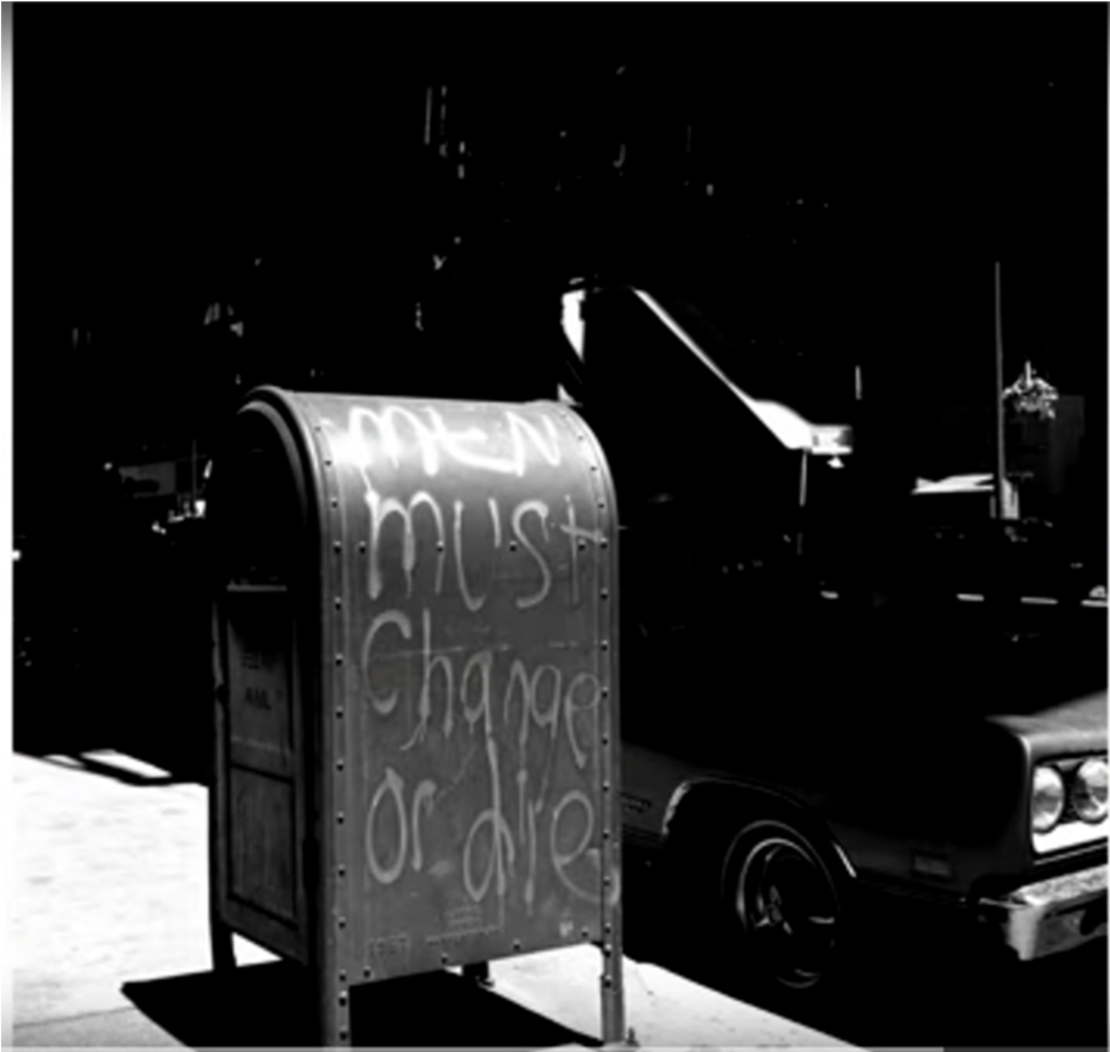 Not only did Maier take photographs but she made several audiotapes, which she recorded herself on a portable cassette player. In one cassette, Maier is walking through the aisles of a supermarket asking women questions. To one woman she asks, ‘What do you think of the impeachment?’ Clearly, she is referencing U.S. President Richard Nixon’s 1974 impeachment after The Watergate scandal. The reply by the young woman is a passive ‘I don’t know,’ to which Maier forcefully retorts ‘Come on… You should have an opinion. You are a woman!’[5] One can see a resemblance between Maier’s emphatic positioning of every woman as an active political subject, and the case put forward by Solanas – it is up to women to fix the world that has been ruined by men.

Vivian Maier moved between families in New York and Chicago and was based in Chicago during the 1966 riots and the 1968 Democratic National Convention. The framed juxtapositions and cropped viewpoints make it absolutely clear the conversations Maier was involved with on the street. Taken by Maier, Untitled (date unknown) [Fig.3], frames a door, the centre of which has a poster that is torn and ripped. The poster is hand written and implores the reader to ‘Fight Racism and Unemployment’ and to ‘Demand More Jobs’. Maier is witnessing and documenting this scene of tension; an act of criticism has been criticised. The slogans are accompanied by the image of a fist thrust into the air, the logo of The Black Panther Party.  The Black Panther Party, an African-American revolutionary group, was formed in California in 1966 by Huey Newton and Bobby Seale to patrol and protect African-American neighbourhoods from police brutality. 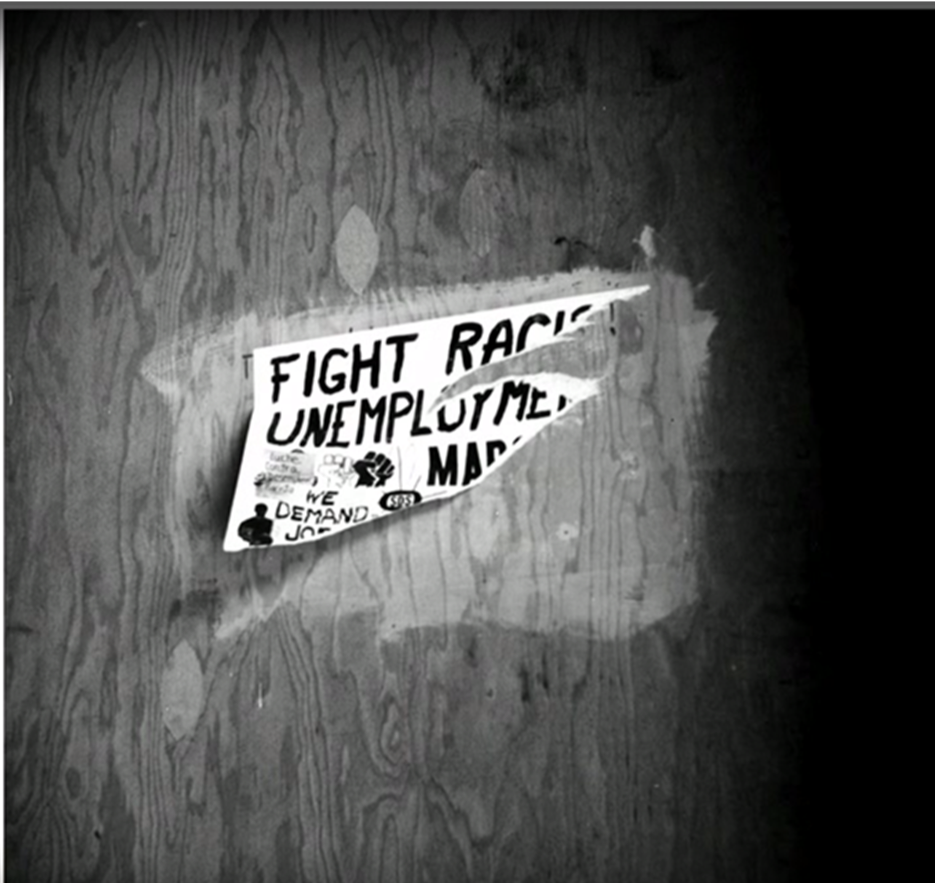 The insurgent Civil Rights Movement of the early 1960s dismantled legal segregation; the 1964 Civil Rights Act and 1965 Voting Rights Act codified the movement. Though, according to Joshua Bloom in Black Against Empire: The History and Politics of the Black Panther Party, many black people, ‘having won a measure of political incorporation, organized to win electoral political power.’[6] Moderate civil rights organisations, such as the National Association for the Advancement of Coloured People (NAACP) and the Urban League, focused upon racial discrimination in jobs, education, and housing.[7] Newton understood the Civil Rights Movement’s victories to be illusory ‘containment policing practices’ which ghettoised, impoverished and politically subordinated black American citizens.[8]

Maxwell Street, Chicago, IL. (1962) [Fig.4] captures four black men, three of whom are sitting on a metal bed in the middle of a wasteland, debris covering the ground. One man is standing in the distance looking down at the debris of broken furniture. Each man on the bed looks off into the distance; they are sitting, reclining and lying on the bed almost as if they are in the traditional domestic setting of a bedroom. They have a table to the left of them with cups, bottles and a jug arranged on top. 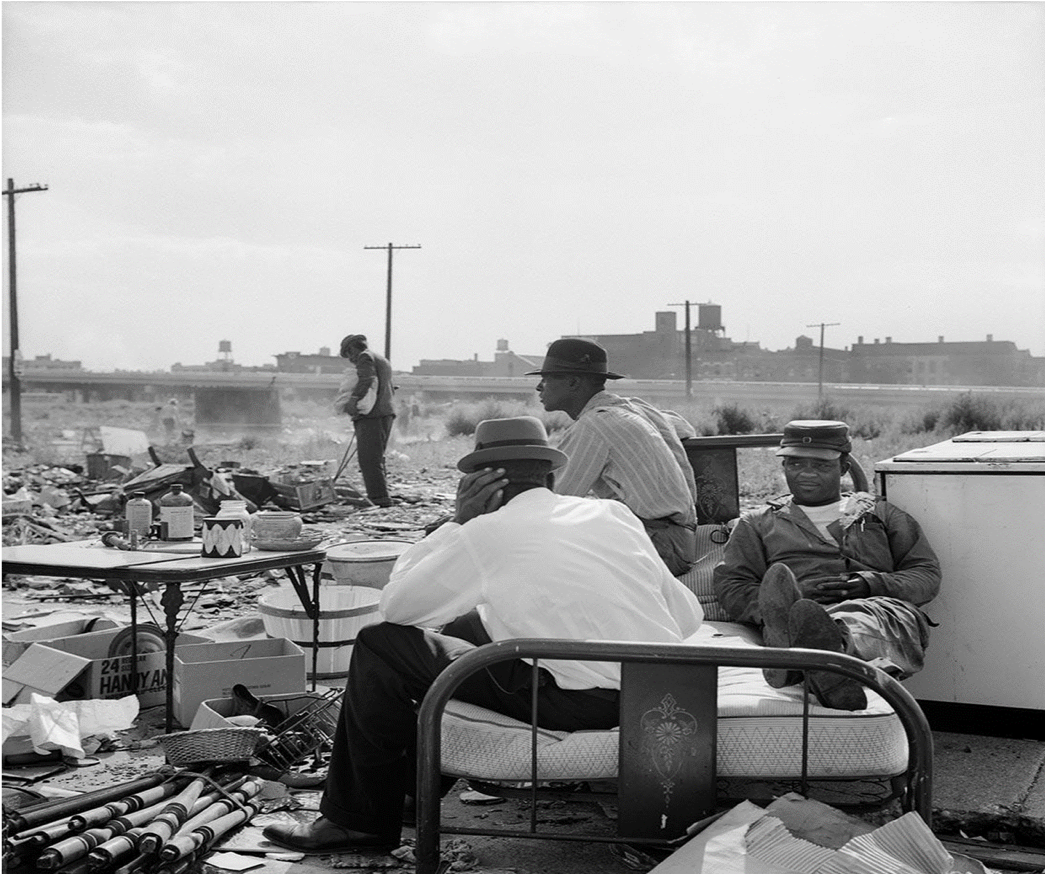 During the 1920s, Maxwell street had an influx of African Americans who came north in the Great Migration from the southern states of America.[9] Between 1940 and 1970, the Second Great Migration took place in response to the Great Depression and, arguably, the Civil Rights movement.[10] The industrial backdrop in Maier’s photograph is the landmark of mass migration, a beacon for employment and prosperity which, set against the foreground, is suggestive of the ‘illusion’ that Huey Newton spoke of and the ensuing tension between the dismantlement of segregation and the economic prosperity of the black community.

With the assassination of Robert Kennedy in June of 1968, the year climaxed in August with Chicago playing host to the Democratic National Convention. As delegates flowed into the convention site to nominate a Democratic Party presidential candidate, tens of thousands of protesters swarmed the streets to rally against the Vietnam War and their contempt for the political situation. The national Guard were told to ‘shoot to kill’ if the marches got out of hand.[11]

Maier was a regular visitor to downtown Chicago and during the Democratic elections she was a witness to the tensions between civilian protestors and armed officers. At first glance, Military line and civilians, Chicago, 1968, [Fig.5] draws the eye to the solider on the left who holds the viewer’s gaze in return. His hand on his belt gives him a casual sense of authority and belonging. His right arm on his gun and the shadows beneath his helmet suggest a threating posture. We follow the row of men down the centre of the image and are struck by their order and regularity, mirroring the buildings behind them. They form a barricade, yet when we reach the centre of the image, we are further shocked by the huddle of relaxed, middle class women on the right, who are drawn together as if in conversation. This extreme juxtaposition is both critical and humorous creating a sinister sense of unreality. The left side of the image has an air of menace while the mundanity of the women creates an absurd counterpoint — a deliberate attempt by Maier to form an opinion on the preposterousness of the situation and the ease with which armed officers have been deployed. 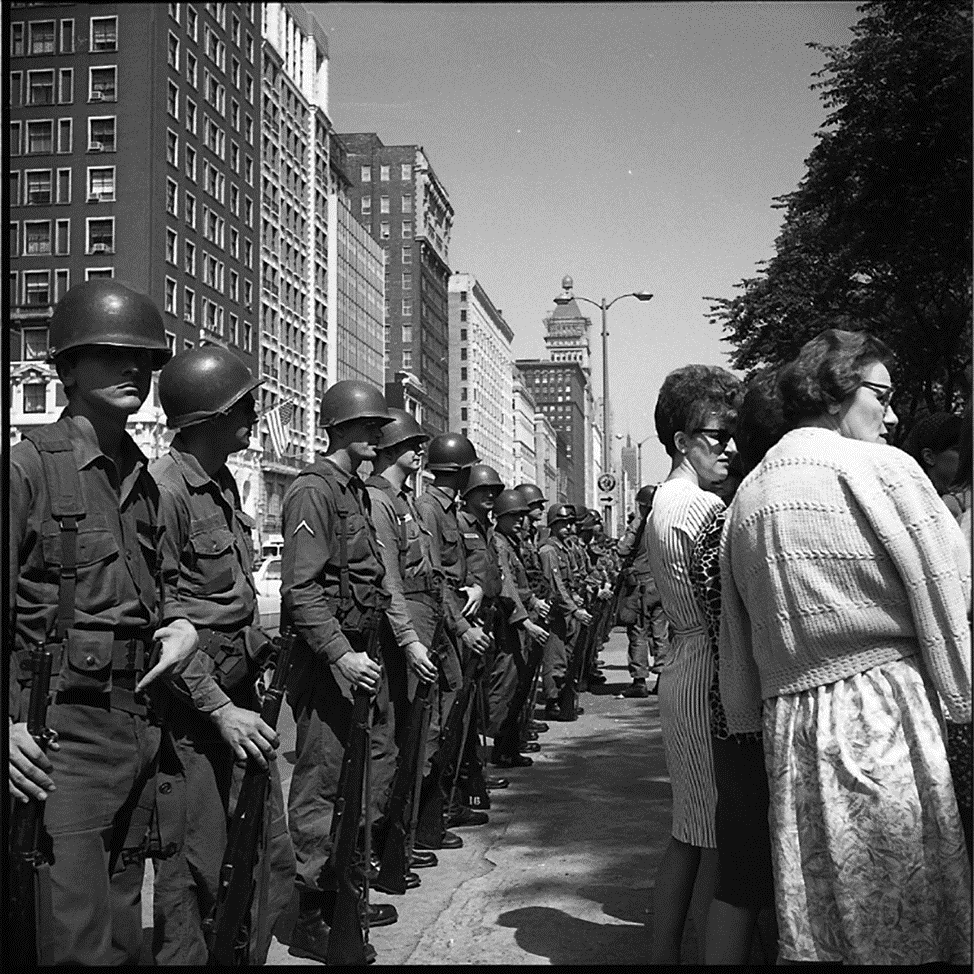 Vivian Maier’s amateur photographic practice allowed her entry to a liminal space. With an analysis of Maier’s images, their compositional framing and juxtapositions, it has become clear that they were an integral part of her photographic routine. Furthermore, these techniques acted as a commentary on the social and political developments that occurred throughout 60s America. Ultimately, Maier’s photography witnesses and creates a space for transgressions, framing them to be centre of the image, the focal point and prime interest of her image taking.

Lucy Mounfield is a Midlands4Cities fully funded doctoral researcher at the University of Nottingham, in her second year of PhD study. Her PhD research will address key problems in the historiography of the amateur photographer using Vivian Maier (1926-2009) as a case study. She completed her MA and BA in History of Art at the University of Birmingham. She is the Editor of Midlands Historical Review- a multi-disciplinary, historically-oriented journal. She is on the Doctoral and Early Career Research (DECR) Project Broad - an affiliation of the Association for Art History.
View all posts by Lucy Mounfield →
Tagged  African American History, Art, Black History, Civil Rights, Gender, Literature, Photography, Visual Culture, Women's History.
Bookmark the permalink.