The Death Dance: the Pickwick Club Disaster in Boston, 1925

As a uniquely American musical synthesis and culture, jazz music has achieved pre-eminence throughout the world, most especially through the black American experience.[1] Today it is recognised as a national treasure, celebrated by ethnographers, historians, US presidents and more. However, during the 1920s, jazz music was consistently referred to as uncivilised and, on occasion, savage. Anglo-Americanjournalistic tracts consistently tied the music to matricide, mental illness sexual promiscuity and more. In Boston, the city’s major newspaper, the Globe, repeatedly cited jazz’s influence as the impetus for acts of murder, cannibalism, burglary, prostitution, and, as this article will show, the deaths of forty-four people killed when a popular nightclub in the city collapsed.[2] Through jazz, such articles suggested, the incivility that many white Americans saw in their black compatriots could become contagious, spreading to the white population as well.

At the height of prohibition, Boston developed anetwork of speakeasies – illicit drinking clubs – that were ‘more grungy than glamorous’ and ultimately loaded with alcohol and rife with violence, gambling and promiscuity. One such club was the Pickwick on Bench Street in present day Chinatown.[3] Newspaper reports from the time record consistent upheaval at the venue, with the Globe remarking that its crowds were rowdy, the music, primarily jazz, was lively, and — in keeping with general perceptions of the art form — often unsatisfying. Investigations would later reveal that the Pickwick was structurally unsound, but in the immediate aftermath of the disaster city officials, the media, and residents speculated over the cause, with many concluding that jazz music and jazz dancing were responsible.

At the start of 1925, Boston nightlife principally revolved around three venues: the Pickwick, the Phalanx, and the Lambs’ Club. Inside fifteen months, all three were gone, barring desperate attempts to reopen the latter two. While the city boasted an additional array of barrooms and ballrooms, the aforementioned were the ‘big three’ venues in the city.[4] And while they all, to varying degrees, catered for the dance craze culture of the Jazz Age, each club was quite different from the other in its makeup, rules, and clientele. Yet all operated on the same fundamental principle of membership, late night dancing, and a turn-a-blind-eye attitude to the sale of liquor on the premises by third parties. As Henry Harris of the New York Times explained:

It was possible that someone might be on the premises with a suitcase of liquor for sale. Yet it was impossible, if the club was raided, that the management knew anything of liquor-selling, even if the same man brought the same suitcase to the same club with the same kind of liquor every night for a month’.[5]

Of the three venues, the Pickwick Club at No. 12 Bench Street was the most popular meeting place for young white dancers and jazz fanatics in the city.  On July 4, 1925, however, it became better known as the place where forty-five people lost their lives and over fifty were injured as its core structure gave way to the weight of a large crowd inside.[6] Press reports describe the scene: as revellers danced, the fifth floor of the building collapsed without warning, carrying with it the fourth and third floors. Within moments, tons of stone, plaster and bricks crashed through to the second floor where 150 merry makers were enjoying an evening’s entertainment. Due to the added weight of the floors above, the second floor quickly gave way and carried down into the basement a cargo of dead and dying.[7] Amongst the departed were famous boxer Neddo Flanagan and local Police Inspector, Alexander Benjamin.[8] 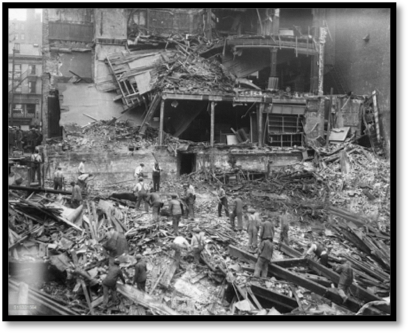 ‘Workmen Clearing away debris, July 4 at the site of the Pickwick collapse’. Published: July 6, 1925.

Two days later, on Monday, July 6, District Attorney Thomas C. O’Brien, supported by Governor Fuller, Attorney General Jay R. Benton, Secretary of State F.W. Cook, and Commissioner of Public Safety, Alfred F. Foote, launched a grand jury (Suffolk County) investigation. In addition, all nightclubs and resorts in the centre of the city, as well as some further afield, were shut down pending further inspections. The following morning, Henry Harris, writing for the New York Times,declared that ‘Night Club Life’ in Boston was all but over.[9] While evenings in the city would eventually return to some semblance of normalcy, the disaster served to support the sentiments of Boston officials and white members of the public who viewed the Pickwick and similar clubs in the city as arenas for vice, gambling, and general criminality. Worse still, the collapse was used by the Boston media and city elites as a means to attack new-age social conventions such as dancing and associated musical forms, particularly jazz.

The Pickwick Club, like many venues in Boston at the time had a ‘questionable’ history and, in the words of the Boston Globe, ‘unruly audiences’.[10] According to several press reports, the Pickwick was raided regularly for liquor related crimes and the police were regularly called to the premises by local residents. When things got too out of hand sometimes even the patrons themselves would ask the authorities to intervene in disturbances.[11] Notably, on February 9, 1925, a special officer of the headquarters liquor squad, John Laidlaw, was struck and almost knocked unconscious by a reveller.[12] Little over a month afterwards, on March 23, 1925, a man was stabbed in the leg during a small riot at the club.[13] At the same time, several men, including one Mr James Montrose, were arrested for drunken skirmishes.[14]

Official investigations and several disaster probes would eventually reveal, in the courts, that the cause of the Pickwick’s collapse was due to the fact that the building’s structure had been weakened by excessive amounts of water:  some 10,000 gallons had been used to put out a fire at the club on the night of April 13 – but this was largely ignored by the Boston media at the time. Initial newspaper reports instead placed blame on an unruly cosmopolitan crowd, which quickly morphed into a disorderly one buoyed by liquor and popular music.[15] The day after the collapse, the Boston Post and the Boston Globe both led with stories that accused excited revellers, whipped into frenzy by live jazz music, of literally shaking the walls to the ground by moving frantically and rhythmically in unison. Such a claim was given credence when a singer at the club stated that:

Dancing was going at a furious pace and everybody was having a lively time when without warning the plastering began to crumble. – Rocco Carparto aka ‘Teddy’ Williams Carparto.[16]

Subsequent reports homed in on specifics of the dance itself and concluded that revellers had been engaged in the ‘Charleston’, a fast fox trot introduced by black lyricist, Cecil Mack and musician, James P Johnson, in the ‘all-Negro’ revue Runnin’ Wild.[17] The Charleston would become the signature dance of the Jazz Age, easily eclipsing the bunny hug, the turkey trot, and the shimmy. In Boston, the dance’s vigorous movements were blamed for the Pickwick collapse, and it was subsequently referred to there as the ‘death dance’.[18] Allegedly, as the media narrative was affirmed, some club patrons asserted that revellers had danced the Charleston so frantically that they had caused the lights on the dance floor to cut out in the immediate moments before plaster began to rain down on to the dance floor, intensifying the sense of dread and helplessness thrust upon those present. 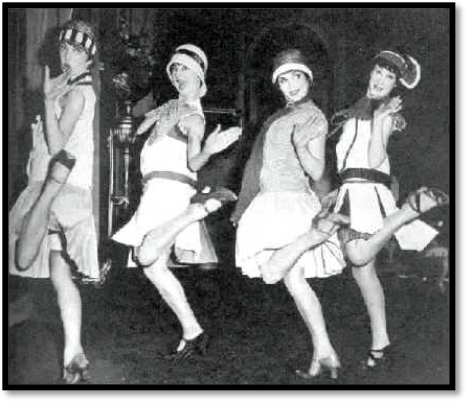 While no black Bostonians were present in the Pickwick at the time of the collapse, the politics surrounding the incident had clear racial undertones. The Charleston’s association with black American singers and performance imbued the jazz club with an air of immorality, indecency, and transgression. The Globe, in an effort to evidence such allegations went as far as to publish the sheet music for a jazz song they declared to be the last ‘Heard by the Pickwick Club Victims’: a standard played by many black touring bands of the era.[19] In the popular mind, the Charleston Dance and the Pickwick Collapse became interwoven in a cause-and-effect relationship. In the aftermath, city officials, including members of the Watch and Ward, took the drastic step of banning the Charleston Dance outright, citing the Pickwick disaster. For years thereafter, as jazz swung and echoed loudly in other cities, in Boston bandleaders were told to turn it down when the dancing got too vigorous.

Thus, as the Jazz Age reached its highpoint, efforts to make the music respectable in Boston revolved more and more around the negative arguments put forward by vocal white factions, including those in the media and its cultural elites. Such factions sought to maintain esteem in the realms of adopted European forms such as classical and concert music, which were considered superior in technique, education and, above all, morality.[20] In this respect, white Bostonians defined the cultural vernacular in the city – i.e., the concept of what good music was. As such, jazz, which was deemed unrefined and unwanted, was purposefully ostracised and relegated to the margins.[21]

[3]Harvard University Library. Law School: Harvard Depository. Call # K13. A78x. American Bar Association, ‘Legal Aspects of the Prohibition Amendment: the argument of Eliot Tuckerman, Esq., in the New York Assembly, that the Prohibition Amendment was not legally and constitutionally before the states for action; Extracts from the Journal of the Federal Convention of 1787 and Madison’s Notes. Congressional precedents. Massachusetts Law Quarterly. May, 1918. p. 233-281

[21]Paul DiMaggio, ‘Cultural entrepreneurship in nineteenth-century Boston: the creation of an organisational base for high culture in America’, Media, Culture, and Society, 1982 4, 38.

In June 2017, Dr Craig Doughty completed a PhD thesis entitled ‘Constructing a history from fragments: jazz and voice in Boston, Massachusetts, circa 1919 – 1929’ (Keele University). This work applied an interdisciplinary methodological approach that incorporated musicology and subaltern studies. The focus was on the appropriation of jazz music produced by underrepresented blacks in Boston during the period into a form of protest dialogue. Dr Doughty's current research, entitled ‘Can the Subaltern Play’ seeks to broaden the scope of his PhD thesis by focusing on the period 1910 to 1949. In doing so, it will present the possibility for comparison with the social, cultural, and economic dynamics discussed in his original work. Additionally, this research provides a suitable opportunity to advance Dr Doughty’s proposed methodological approach to historical reconstruction over a longer period, and in doing so ascertain to what extent the social and cultural dynamics of black Boston changed from the turn of the century to its mid-point and the causes for these changes.
View all posts by Craig Doughty →
Tagged  1920s, African American History, Black History, C20, Cultural History, Jazz, Musical History.
Bookmark the permalink.