The 2018 postgraduate symposium for the Irish Association for American Studies, co-organised by Postgraduate and Early Career Caucus co-chairs Sarah Cullen and James Hussey, set out to explore the narrative creation and recreation of American history and culture across all forms of media, and the extent to which America continues to write and re-write itself.  Throughout the day, various themes and debates emerged, many of them centring on the fundamental malleability of ‘Americanness’ and the resilience and irrepressibility of minority voices in American culture. While each paper touched on a different cultural strain with regard to the notion of ‘American identity’, the overarching premise may be described as an investigation of the ideological construction of America. 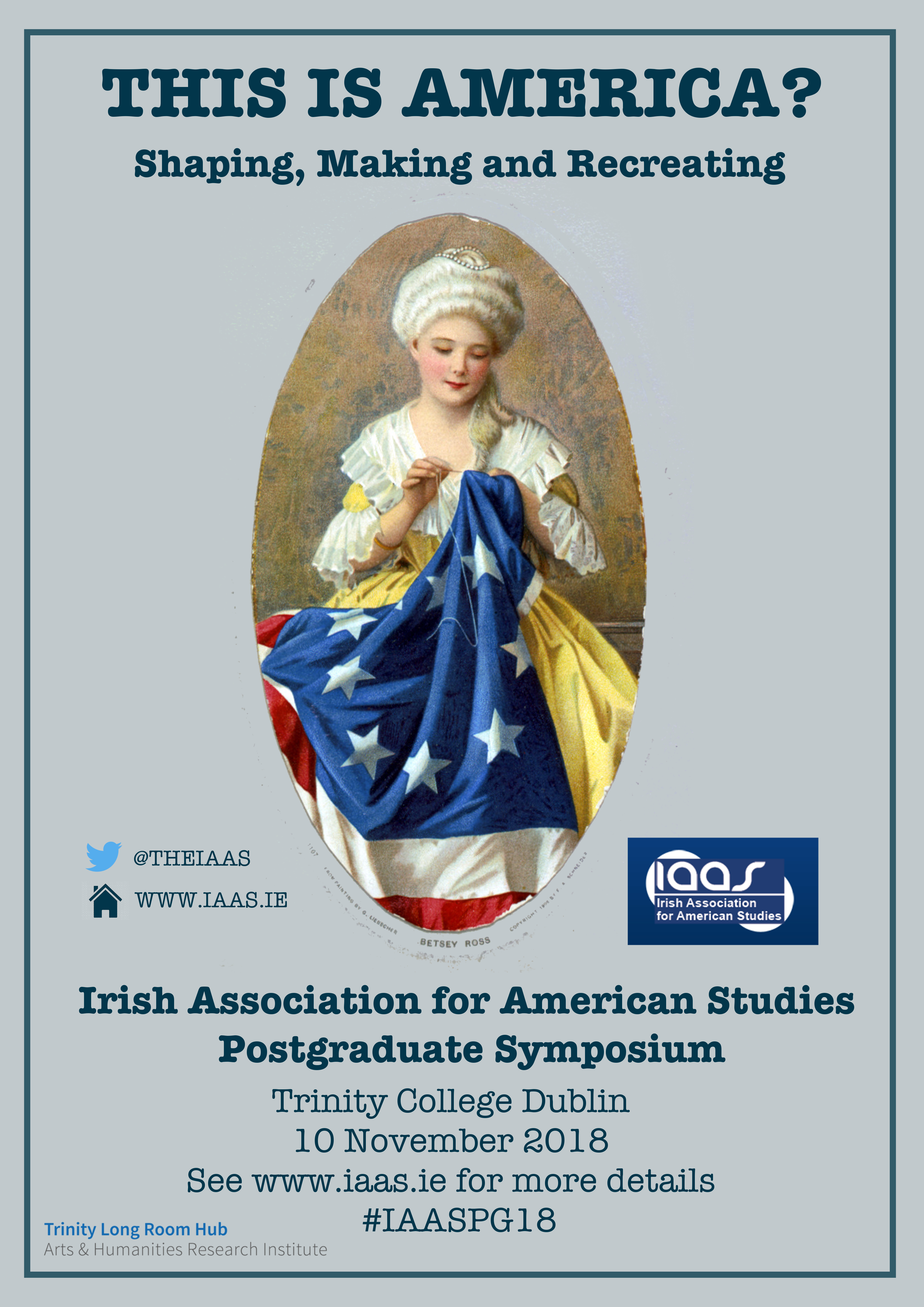 After opening remarks by Dr Jennifer Daly (Trinity College Dublin), secretary for the IAAS, co-organiser James Hussey (Trinity College Dublin) welcomed delegates to the symposium and introduced the first panel, ‘Resistance and Resilience in Black America’, which featured three excellent presentations on black identity in America, from the early twentieth century to the 1960s and right up to the present day. Matthew O’Brien (University College Dublin) kicked things off with a paper on Black Power policing and the Afro-American Patrolman’s League, an organisation established in 1968 that aimed to build bridges between Chicago’s African American communities and law enforcement. O’Brien discussed the foundational role of Edward ‘Buzz’ Palmer in the establishment of the League and the stated aim of ‘separatism without separation’, as well as the often fraught relationship between white law enforcement personnel and League members, many of whom were subject to formal and informal reprimands from figures of authority within the police force. O’Brien’s paper was followed by Giséle Scanlon’s (Trinity College Dublin) discussion of Jordan Peele’s 2017 film Get Out, which explores liberal racism, the myth of ‘white innocence’, and violence against black bodies. Scanlon emphasised the importance of context when examining Peele’s film, which was released to global acclaim in the months following Donald Trump’s presidential election win and at a time when the hope of a ‘post-racial America’, fostered during Barack Obama’s presidency, had begun to seem premature. Scanlon went on to discuss Peele’s film as an example of ‘black gothic’, a reworking of the gothic tradition which centres on contemporary racial and class-based anxieties as well as manifestations of generational trauma. The panel’s final paper, presented by Samantha Gowdy (Queen’s University Belfast), rounded out a fascinating discussion on racial inequality in America and the historical pervasiveness of white brutality. Gowdy talked about the Elaine massacre of 1919, during which hundreds of black citizens of Phillips County, East Arkansas, were murdered by mobs of white men spurred on by fears of a ‘black insurrection’. As the 100th anniversary of this massacre approaches, a memorial is planned for East Arkansas, something which Gowdy used to discuss the impetus towards white revisionism in America. 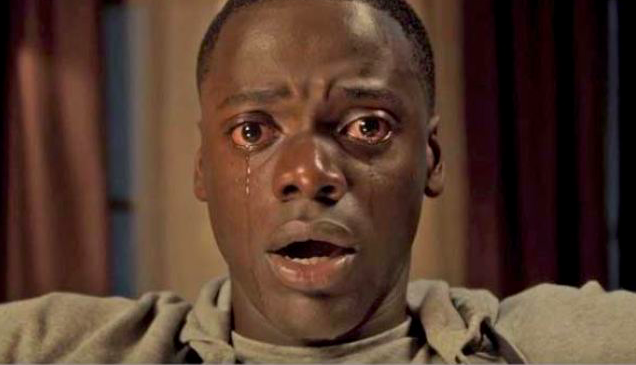 Panel three discussed Jamaican-American writer Claudia Rankine, whose epic poetry explores historical trauma and racial identity. Maria Manning (University College Cork) and Mícheál McCann (Queen’s University Belfast) both noted Rankine’s ability to give expression to the racial tensions of contemporary America while maintaining a lyrical voice that is at once personal and political. All four papers emphasised the weight of history and tradition with regard to the lived experience of marginalised communities, and the extent to which the collective consciousness of a nation finds expression through art.

The panel,  entitled ‘Women writing Women’,  focused on American women writers and the micropolitics of domestic identity. Dearbhaile Houston’s (Trinity College Dublin) paper on the work of Lorrie Moore and postfeminist hauntology raised some intriguing questions about American nostalgia and ‘female’ spaces in a neoliberal context. Houston was followed by Andrew Cunning (Queen’s University Belfast), who discussed the American poet Marie Howe and the quietly spiritual aspects of her work, focusing as it does on the ‘American ordinary’ and domestic mysticism.  Catherine Healy (Trinity College Dublin) provided an enlightening perspective on the experiences of female Irish immigrant domestic workers of the late-nineteenth  and early-twentieth  centuries. Drawing on several sources, Healy argued that the experiences of these women were far more complex and diverse than previously thought, and that many of them found dignity in their domestic positions. All three presentations drew attention to the potential majesty of the ‘ordinary’ and the historical value of ‘women’s work’, something which spoke to the overarching theme of the ‘idea’ of America and the extent to which this ‘idea’ can be shaped, revised and rewritten. 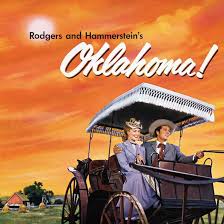 This panel was followed by two concurrent sessions, with Sean Travers (University College Cork) and Temmuz Sureyya Gürbüz  (NUI Galway) discussing the reorientation of American cinematic narratives  while Catherine Casey (UCD) and Anna-Grace Scullion (University of East Anglia) explored the recovery of indigenous voices in American fiction and theatre. Travers spoke on minority trauma and competitive narration in television, movies and video games, using the popular visual novel Doki Doki Literature Club! as an example of a piece of media in which the dominant narrative voice is gradually superseded by a minority voice, something which Gürbüz also touched on in her paper on ‘punk’ independent cinema. Gürbüz discussed the work of American filmmaker John Waters, whose infamous cast of ‘Dreamlanders’ were a key component of his success as a creator of messy, subversive, challenging films. Casey’s paper on the musical Oklahoma! and whitewashing raised questions about the insidious nature of historical revisionism, something which several of the day’s papers had explored to various extents, while Scullion’s presentation on Louise Erdrich and the tradition of oral storytelling as a means of preserving indigenous voices highlighted the necessity of these narratives as a safeguard against revisionism.

The penultimate panel of the day featured Charlotte Gough (Manchester Metropolitan University), Anne Mahler (University College Cork) and Máiréad Casey (National University of Ireland Galway) discussing trauma and gender in print and on screen. While Gough gave a fascinating presentation on the dramatization of the ‘Satanic Panic’ phenomenon in the 1987 neo-noir film Angel Heart, drawing particular attention to the film’s depiction of inherited trauma and masculinity in crisis, Mahler’s paper focused on Jennifer Brown’s 2009 novel Hate List and its representation of survivor’s trauma. Both Gough and Mahler emphasised the extent to which trauma can potentially shape or re-shape identity, something which paralleled the arguments of earlier speakers – in terms of racial and gender identity, trauma can be as formative as it is inescapable. Casey closed out the panel with a very persuasive paper on the 2014 horror film Deliver Us From Evil and male possession, arguing that possession narratives can potentially serve as a vehicle for the appropriation of victimhood by hegemonic white masculinity. 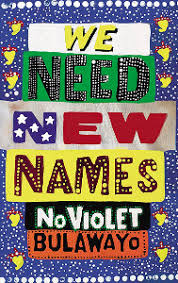 The final panel of the day included Sarah McCreedy (University College Cork), Ciarán Kavanagh (University College Cork) and Joe Phillips (University of Bristol), who spoke about authorial intent and identity. McCreedy discussed ZZ Packer’s 2003 short story collection Drinking Coffee Elsewhere and ‘new naturalism’, something which Packer uses as a lens through which various experiences of ‘lived blackness’ in contemporary America are explored. Kavanagh went on to explore the concept of the author and the degree to which the relationship between reader and author can impact on textual engagement, using James Frey’s notorious 2003 ‘memoir’ A Million Little Pieces and the furore which resulted from his admission that his work was, in the main, fictional, as an example of the ‘author as parallel text’ or paratext. Phillips gave the final paper of the day, speaking on Zimbabwean author NoViolet Bulawayo’s 2013 work We Need New Names and immigrant identity in American fiction. Asking the question ‘whose literature is it anyway?’, Phillips’ paper proved a fitting conclusion to the day, as he problematised the idea of a singular ‘American identity’ and queried whether the fluidity of identity in a globalised world is accurately reflected in the canon of American literature. The key phrase of the day was certainly ‘alternative narratives’, as the conference as a whole aimed to examine ‘America as narrative’, and ultimately succeeded in interrogating the notion of this narrative as monolithic – as proven by the day’s many illuminating papers, cultural narratives are increasingly subject to the incursion of minority voices.

I am a PhD candidate currently in the third year of my doctoral studies at the school of English at Trinity College Dublin under the supervision of Dr. Clare Clarke. My PhD research looks at domestic noir fiction, a very popular subgenre of crime fiction, specifically the work of Gillian Flynn, who wrote Gone Girl, Dark Places, and Sharp Objects. My research is funded by the Irish Research Council. I have been a member of the IAAS since 2014 and worked as one of the association’s web interns from 2016-2018.
View all posts by Eva Burke →
Tagged  American Identity, C19, C20, C21, Contemporary Fiction, Film, Gender and Sexuality, History, Literature, Politics.
Bookmark the permalink.