“You may not be interested in war, but war may be interested in you” (p.1). How many of us want to read about war? Does it remind us all of pain, loss, blood and misery? Martin Van Creveld’s newest book, “More on War”, is not a story of these things. He uses examples drawn from military history to explain what war is and add 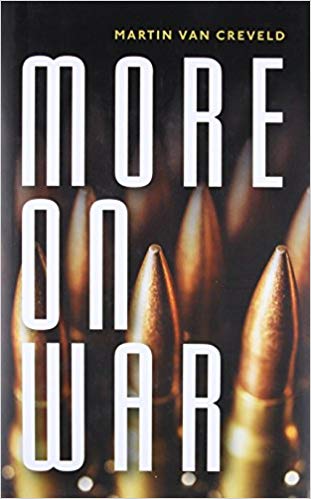 more to what we already know on this difficult subject.

The book is a detailed, multilevel, and highly interesting work that proves Van Creveld’s status as one of the most prominent war and military experts in the world. The Israeli-Dutch scholar tries, and mostly succeeds in convincing his readers that “war is the most important thing […]; though it may come but once in a hundred years, it must be prepared for every day” (p. 1).

The book is a combination of numerous theories surrounding the field of war and military studies and offers numerous examples of historical events and prominent figures to support Van Creveld’s view that theorizing war is probably even more important than examination of the events: what is needed is analysis and multifaceted interpretation. He incorporates the words of scholars, philosophers and theorists to strengthen his opinions and to serve the purpose of the book: to teach what war is about, not merely to relate war episodes. Kant, Plato, Rousseau, Hegel, Nietzsche, Chomini, Flavius, Sun Tzu and Clausewitz are mentioned in every chapter; with the latter two being his favourites; the author shows that war, as a concept, has generated interesting debates throughout the centuries.

The book is divided into eleven main chapters and numerous sub-chapters. The result  s reader-friendly, with his complex and well-elaborated ideas and views explicated simply, though nowhere simplistically. It offers as full an explanation as a reader could need on the specific topic, without an overwhelm of detail. Van Creveld manages to conquer information from centuries of war experience, human suffering, and aggression and distill it into a book. If you are looking for-stories and trivia from wars and timelines of battles around the world, this book is not for you. The author has deployed his experience to answer questions such as: What are the elements that make this, one of the oldest human activities, defy time and progress?  What are the different types of war, the key players, the organization of war, and what makes for a successful one?

The division of the chapters gives the impression that Van Creveld has created a ladder that begins from basic knowledge and leads to the most sophisticated and complex notions. In a way, the reader feels that even if he does not know much on war before he starts reading the book, in the end he will have gained knowledge equal to a general or war expert.

“War is the most important thing in the world” (p.1) reads the first line of introduction; a clear statement of what the book is about and how committed the writer is to the cause of explaining-never promoting- war.  He helpfully clarifies the difference between theory and history, and distinguishes his book from other similar ones; he does not write a history book but rather historical events channel information towards the reader as examples upon which theory is applied. This is not war history but history of the theory of war.

Van Creveld explains each type of war in such a way that the reader feels sometimes as if he is discussing with an expert and other times, with a general. He dismantles each concept, focusing also on the act of war, mentioning tactics and methods, not only the theory, and explains every part, step by step.

Van Creveld believes that one way or another, war has a solid structure and that games and spontaneous actions are not acceptable in such a complex process. According to his point of view, the actual clashes between armies or groups is part of a momentum built upon numerous layers. Building a war machine, whether the focus is on armies or guerrilla fighters, needs a lot of preparation and calculation, a lot more than funds and aggression. Van Creveld underlines the role of people in this process and the ways they prepare for the battlefield. He seems amazed by the fact that people are ready to give their lives for a cause – the author examines how this comes about, whether it is perhaps fabricated in some cases, just what are the powers that make people defy their fears and offer their lives.

In the main chapters, the reader will find more tangible information on what it a state or general needs to prepare for war.  How economics are connected to war (chapter 2), how to build forces (chapter 4), how to conduct war (chapter 5) and what strategies should be followed (chapter 6) are some of these topics. Covering every aspect, he explains the types, difficulties and dynamics of war at sea (chapter 7) and the role of nuclear weapons in modern warfare (chapter 9). Air War, Space War and Cyberwar are dealt with in chapter 8.

Asymmetric War (chapter 11) is, along with cyber-war, probably the most interesting part in terms of modernity and the impact it has in current warfare. For example, countries like Israel (repeatedly mentioned in examples) are not capable of always dealing with asymmetric war tactics. Cyber-war involves many countries targeting and being targeted at the same time in an undeclared war has endless potential to become extremely hazardous. Despite its obvious importance and role in the future of warfare, the author does not seem as knowledgeable here as in other fields, perhaps because it is a new piece on the board of war or perhaps because he specializes in the examination of the past.

He may not be so strong in the analysis of cyber-war but he draws an interesting conclusion: “A massive cyber-attack capable of dealing an instant death blow to entire countries appears rather unlikely […] nor […] can cyber-war render military history irrelevant and totally change the character of war.” (p. 142) Such a remark could generate discussion, even an argument between old and new school scholars, those who were born when wars were conducted on battlefields and those who believe that battles take place primarily online and cyber powers can do more harm than traditional weapons. Regardless of the outcome of such a debate, Van Creveld succeeds in planting a seed for further elaboration, exactly as a good book should do.

The book seems so well-tuned that it does not leave much space for questions – it gives answers even before you think of the question; it feels as if Van Creveld has used his experience as a professor and answered all the questions he has ever been asked during his remarkable and long career. That is probably why sometimes this work seems like an introduction and at other times like an advanced textbook for post-graduate studies. But it serves both cases well, whereas it can be difficult for general readers to follow the opinions of the theorists mentioned in the book. For that reason, a biographical note of the theorists upon whom the book is based would make a useful appendix and broaden the readership.

The first chapter asks “Why War?” The reader, having finished the book, does not necessary have the answer, probably by design.  While most think that war should not be the solution to any problem, the author contemplates this question and concludes that while war is a lethal – though sometimes necessary – action, it can “reflect some of our best and most sublime qualities” because it “does not consist solely of some men inflicting death and suffering upon others […] but it demands that men be ready to suffer, sacrifice themselves and even lose their lives while fighting for a cause.”(p.20) Who the reader is, what his political views and background are would determine the identity of the “cause”; how noble are the actions taken to succeed, how many are the casualties, who suffers and in the end who wins or loses. Is the reader an Israeli or a Palestinian? Is he a nationalist or patriot? Is he a pacifist or a soldier? A reader can argue or even accuse him of romanticism. However, Van Creveld does what he knows best: he promotes dialogue and teaches his audience.

Whether readers agree or not, no one can deny the fact that “More on War” is a valuable source of information that will engage the reader until the very last page. It is an example of how an academic of Martin Van Creveld’s status and experience make his book attractive, both to specialized scholar and the general audience and, most of all, it can generate dialogue because; after all, “these are questions each society and each person should decide for themselves” (p. 208).  Interested scholars may also wish to draw on the works by Colson, De Saxe, Luttwak, Mair and Sun Tzu.