From Lemonade to the Louvre: Beyoncé and Jay Z’s Contestation of Whiteness and Showcasing of Black Excellence in Everything Is Love 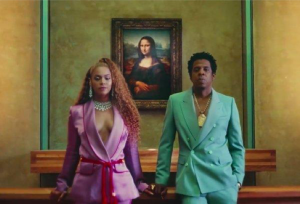 On 16 June 2018, Beyoncé and her husband Jay Z released their latest and joint album, Everything Is Love, exclusively to Jay Z’s music streaming service, Tidal [1]. The album quickly became the subject of discussion among cultural commentators and mainstream media around the world, who largely saw it as the final instalment in a trilogy of albums released by the couple between 2016 and 2018 [2]. The first two instalments of this trilogy, Beyoncé’s visual album Lemonade (2016) and Jay Z’s 4:44 (2017), were widely considered significant by critics as a result of their exploration of complex and nuanced issues of race, gender and identity within the historical and contemporary contexts of African American oppression [3]. Lemonade in particular was read as a culturally significant text by feminist scholars and cultural critics (Harris-Perry 2016 [4]; hooks 2016 [5]). In Everything Is Love Beyoncé and Jay Z continue to explore the complexities of these issues. The couple celebrates the restoration of their marriage and their unparalleled commercial success (individually and in partnership), addressing both through their display of black cultural capital within a historical trajectory of transatlantic African American cultural contestation; the process by which black Americans have challenged the accepted cultural ideals of mainstream, white society.[6]

Throughout the album, both Beyoncé and Jay Z make frequent references to their cultural domination and financial success. During the track “Boss”, for example, Jay Z exclaims “It’s disturbing what I gross”, while in “Heard About Us” Beyoncé sings “No need to ask, you heard about us/ Already know that you know about us.” Similarly, in the track “Nice” Beyoncé notes “My success can’t be quantified” and both repeat the chorus line: “I can do anything”. Moreover, and significantly, such declarations are accompanied by statements in which the couple rejects the marginalisation of blackness from the mainstream and credits themselves with having opened the door for the participation of people of colour in the public sphere. In the track “Boss” Beyoncé raps: “My great-great-grandchildren already rich/ That’s a lot of brown on your Forbes list”, seemingly responding to the worsening racial wealth gap in the U.S. and highlighting her contribution to the financial elevation of the next generations of African Americans.[7]. Similarly, in “Apes**t” Beyoncé raps: “All of my people, I free ‘em all” and in “713”, Jay Z credits Beyoncé (nicknamed ‘Queen Bey’ by fans) with liberating people of colour, stating: “America is a mother-f**ker to us. Lock us up, shoot us. Shoot our self-esteem like we don’t deserve true love. Black Queen you rescued us.” In situating themselves and their cultural and financial influence in this way, Beyoncé and Jay Z carefully and unapologetically showcase black excellence, defining this by their ability to succeed – and exceed – against the odds in a country still shaped by white privilege, systemic racism and patriarchal capitalism. African American feminist writer Melissa Harris-Perry argues that “stories of black excellence are particularly powerful for countering derogatory racial images”, suggesting that such stories disrupt the perpetuation of racial stereotypes and instead offer alternative and positively-coded representations of African American success [8]. Beyoncé and Jay Z’s showcasing of black excellence in Everything is Love may therefore be read as the contestation of derogatory racial images. This isperhaps nowhere more explicit than in the album’s lead single “Apes**t” and the accompanying music video, which premiered on Beyoncé’s YouTube channel on the same day that the album was released to Tidal.

Filmed at the Louvre Museum in Paris (the largest and arguably most famous art museum in the world), the video is made up of dance and rap sequences which take place around the museum and feature numerous celebrated works of art, including the Venus de Milo and Leonardo da Vinci’s Mona Lisa. As an institution which holds works of art and historical artefacts which have traditionally been considered ‘high culture’ (cultural products held in high regard, predominantly accessible only to those who are highly educated, white and wealthy), the Louvre has remained a space shaped and defined by histories of European colonialism and whiteness, and by its very nature is home to displays of white, European economic and cultural power. In “Apes**t” however, the museum becomes a stage and the art a backdrop from which Beyoncé and Jay Z centre themselves and their blackness, becoming the focus of the audience’s gaze while the trap hip-hop musical genre disrupts expectations of white propriety and respectability that inform museum etiquette.

For example, in the sequence seen above, the couple align themselves with the Greek statue of the goddess Nike – the Winged Victory of Samothrace[9]. The statue, symbolic of victory, stands over them as they stand regally over their dancers and hold hands in a show of marital solidarity and strength. Their white costume bears a resemblance to the statue, particularly the dress worn by Beyoncé, elevating them to Nike’s likeness and cultural importance. Similar sequences feature throughout the video, bringing together classical European art and contemporary African American popular culture in a demonstration of cultural contestation, power and agency.

What makes the music video more significant with respect to its cultural agency is that Beyoncé and Jay Z look beyond the U.S. to explore and showcase black excellence and to elevate African American culture. In doing so, they follow a historical trajectory of African American intellectuals and artists looking to Europe – and Paris specifically – for self-determination, artistic freedom and cultural agency. Paris has historically offered freedom from the racial barriers and inequality experienced by African Americans in the U.S. (as explored by James Campbell 1995 [10]; Michel Fabre 1991 [11]; Tyler Stovall 1996 [12]). From W. E. B. Du Bois and Josephine Baker among others in the early 1900s (particularly the post-World War I, Harlem Renaissance era), to James Baldwin, Richard Wright and others in the Cold War era of the 1950s, African Americans artists and writers have sought creative freedom and autonomy in the city that Lloyd Krammer argues allowed them access to the public sphere and critical debate denied to them in the U.S. [13] While Beyoncé and Jay Z have already attained artistic freedom and cultural agency through their commercial success in the U.S. (and globally), Everything Is Love aligns them with the historical migration of African Americans artists and intellectuals to Paris in the twentieth century; situating them in-line with the black intellectualism and artistry that has historically sought to uplift African Americans through public contestation and debate, as well as to create a space for others to do so.

Through Everything Is Love and specifically the music video for “Apes**t”, Beyoncé and Jay Z have not only proven that they continue to dominate contemporary African American popular music, but that when they choose to, they can take over a space that is historically and culturally defined by the same whiteness that shaped European colonial histories and the transatlantic slave trade – the legacies of which continue to shape the experiences of not just African Americans, but black and African folks more broadly today. As such, Beyoncé and Jay Z may be read to challenge ideological constructs of racial and gendered identity in the contemporary mainstream of American popular culture, contributing to on-going debates regarding race, gender and representation in the U.S. through their contestation of whiteness and showcasing of black excellence.

[1]Tidal is a music streaming service that was taken over and re-launched by Jay Z in 2015. It was pitched as the first artist-owned music streaming service and promised higher royalties for artists by raising subscription fees above those charged for similar services – such as Spotify. As with Lemonadeand 4:44 before it, Everything Is Love was released exclusively to Tidalbefore it was later distributed and available for download more widely.

[2]Popular music magazines NME and Rolling Stone were among those who reviewed the album as the final instalment of a trilogy; reading it as a continuation of the couple’s previous work.

[3]Both albums also attracted extensive media attention as a result of the couple’s marital infidelity issues, which were first disclosed by Beyoncé in the Lemonade album and later responded to by Jay Z in 4:44.

[6]The term ‘cultural contestation’ refers to the act of challenging accepted societal ideals or values. African Americans have long challenged systemic racism in the U.S. through the disruption of harmful racial images in mainstream (white) American society and culture. Photography, music, literature and art are notable platforms through which this has been achieved.

[7]The racial wealth gap continues to grow in the U.S. Statistics given in a New York Times report published in September 2017 indicated that for every $100 of white family wealth, black families have just $5.04.

Storify of our #bookhour twitter chat on "Herland" by Charlotte Perkins Gilman
Patient Zero and the Making of the AIDS Epidemic by Richard A. McKay
“MATTER IS THE MINIMUM”: Reading Washington, DC’s BLM Memorial Fence

Juliet Winter is an Associate Lecturer and PhD candidate at the University of Winchester. Her PhD thesis examines constructs of racial and gendered identity in the contemporary U.S., drawing upon transatlantic feminist scholarship and critical race theory in its analysis of representations of race and gender in American popular culture, politics and sport. Her recent research and publications have considered the cultural significance of Beyoncé and her 2016 visual album, "Lemonade", in relation to contemporary debates surrounding intersectionality, feminism, and representation. Alongside her PhD research, Juliet teaches on the University of Winchester’s American Studies programme, co-ordinates the Winchester Research Apprenticeship Programme (WRAP) scheme in the university’s Faculty of Arts, and is a Senior Researcher in Learning and Teaching Development.
View all posts by Juliet Winter →
Tagged  African American History, African American Women, Black History, Black Music, C21, Music, Popular Culture.
Bookmark the permalink.